Well, I've been talking about doing this in various threads on the board for the last few months, and, finally, the project will be underway as of Thursday 12/29 .....

The short - Over the course of the winter here I'm planning to rebuild my motor and clean up the engine bay.

The somewhat longer - My original plan was to pull the motor and trans in my slightly rusty 88 Quest, rebuild it, and transplant it into my 88 Starion SHP.  Unfortunately, that car got hit by a very large tree limb in October and smashed the roof.  So, that car now needs body work and some other TLC.  You know what they say about "best laid plans".  The slightly altered "new" plan is to still pull the motor and rebuild, but, for now I'm just going to put it back into the Quest until the Starion is ready.  I have no solid timeline on the Starion, so my thoughts are I can at least be working out the kinks in the rebuilt motor while I get the Starion fixed up and then just swap it again later.  I'm not planning on doing anything too crazy to the motor, just basically a stock rebuild for now.  If you didn't see the threads on the Starion in the B/S section, here they are:

Where I'm at/what I have - Up until September the motor was running fine.  In early September the headgasket blew and that was the end of that.  Though irritated, I didn't really bother me too much b/c I was planning to do a rebuilt anyway.  A follow-up compression test yielded some goofy results, so I'm thinking some new rings are going to be in order.  In the last few months since then I started gathering some parts: 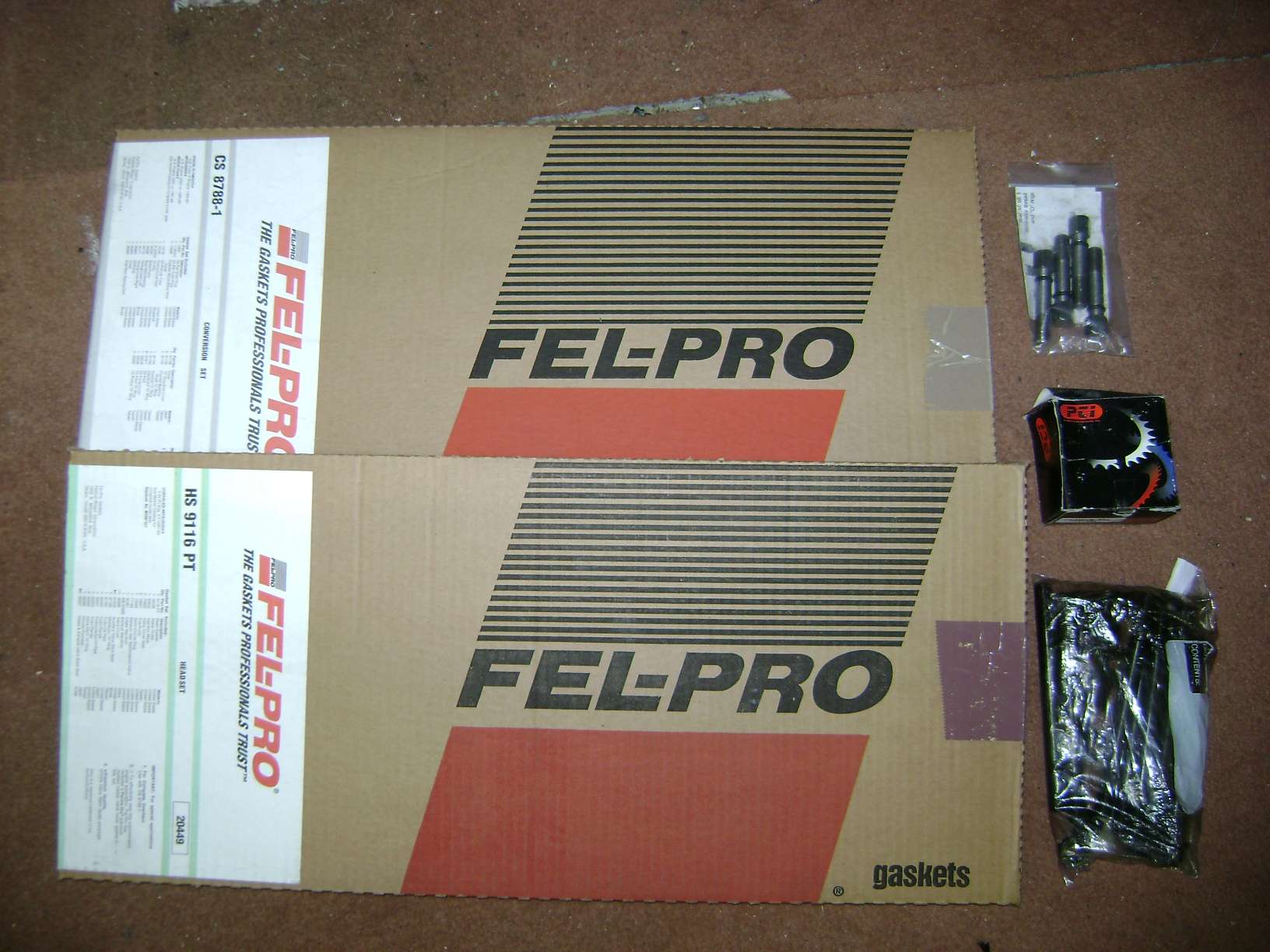 I need to still order a timing kit from DAD, and I will eventually be ordering rings, and bearings (if needed).  I didn't order rings yet b/c I figured I'd wait to make sure the motor doesn't need to be bored over or anything like that.

I also picked up a spare head, in pretty rough shape, which is out at the machine shop as we speak being done over.  I'll post some before/after pics of that later when I get it back.  I'd also like to find a place locally to rod out the radiator.  I figure now is a good time to have that done.

The engine bay I really wasn't planning on redoing since this car is more of a donor for the Starion, but after thinking about I thought it would make good practice.  So, I'm going to go ahead and give it go.  Most likely flat black, but I'm not 100% decided on color yet.

So, that's my first post on this rebuild, Thursday I'll be pulling my first Starquest motor and cracking her open to see what we going on inside ..... more to follow.

Yesterday I managed to get the motor pulled as planned.  In the process, I made a few interesting discoveries.  First, the block already has the balance shafts eliminated.  I need to look into it more to make sure it was done properly, but both balance shafts are missing.   Second, I also discovered an aftermarket 6-puck clutch, which now explains why it would shudder everything I started out in first gear.  The disk is pretty well shot, but the flywheel and pressure plate seem to be in really good shape.  A quick re-surface w/ a new disk and I should be good to go there.  The other surprising thing was the headgasket was NOT blown.  So, I am now even more baffled as to why the car wouldn't start.  Only thing I can figure is the compression was just too low to allow it to fire.

I my haste to get some dinner, I forgot to take a picture of the block stripped on a stand, but I'll take one next time I'm at the shop.  I'm not sure about the cylinder walls.  I need to have someone with more experience analyze them.  Not sure if I can just get away w/ a hone and new rings or whether it will need a bore, so my next step will be to have the block checked out before proceeding with any purchases.

WHAT I STARTED OUT WITH: (about the only thing I've done since purchase is rebuild the TB, everything else in the pic is the result of previous owner(s) 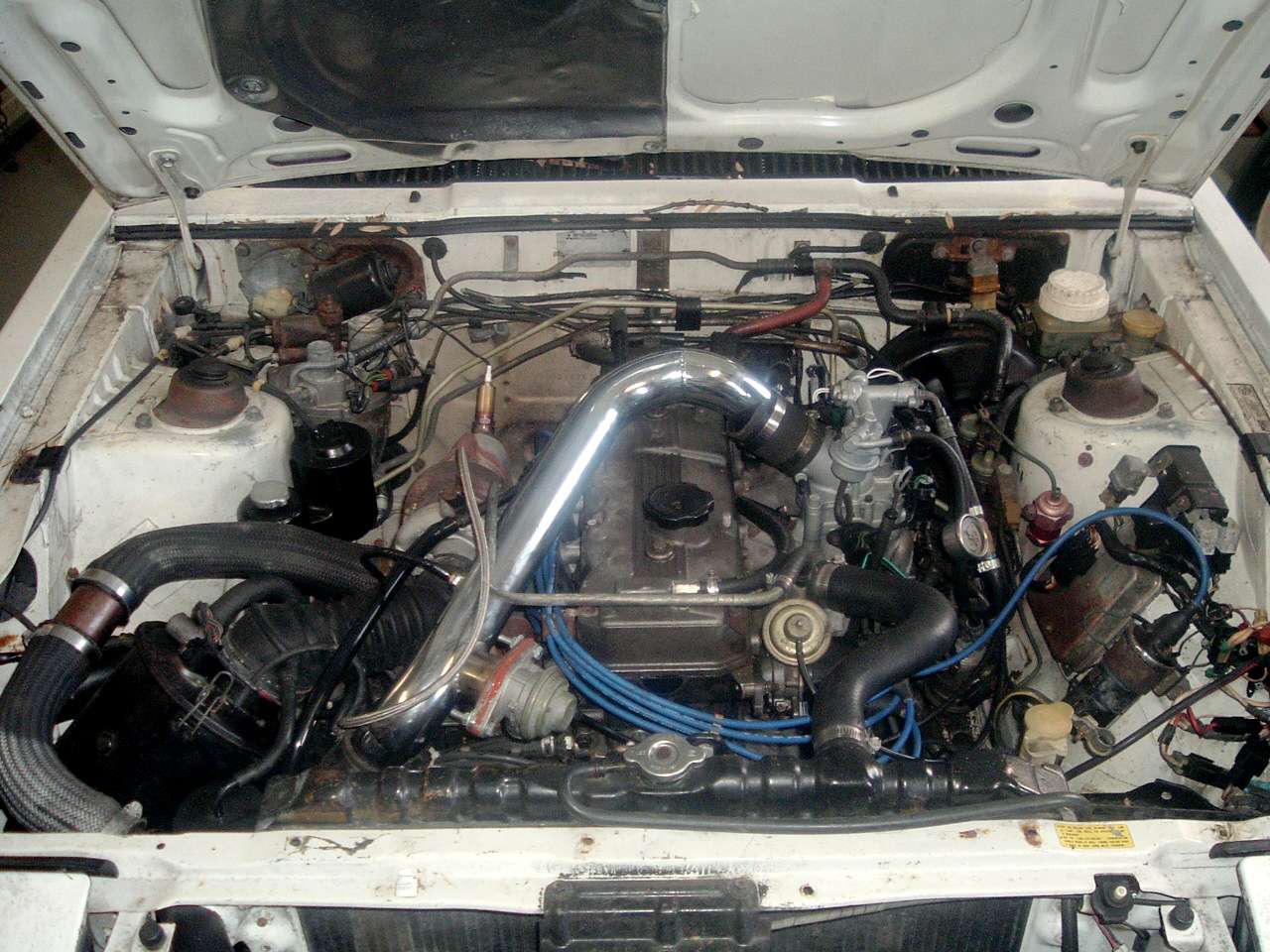 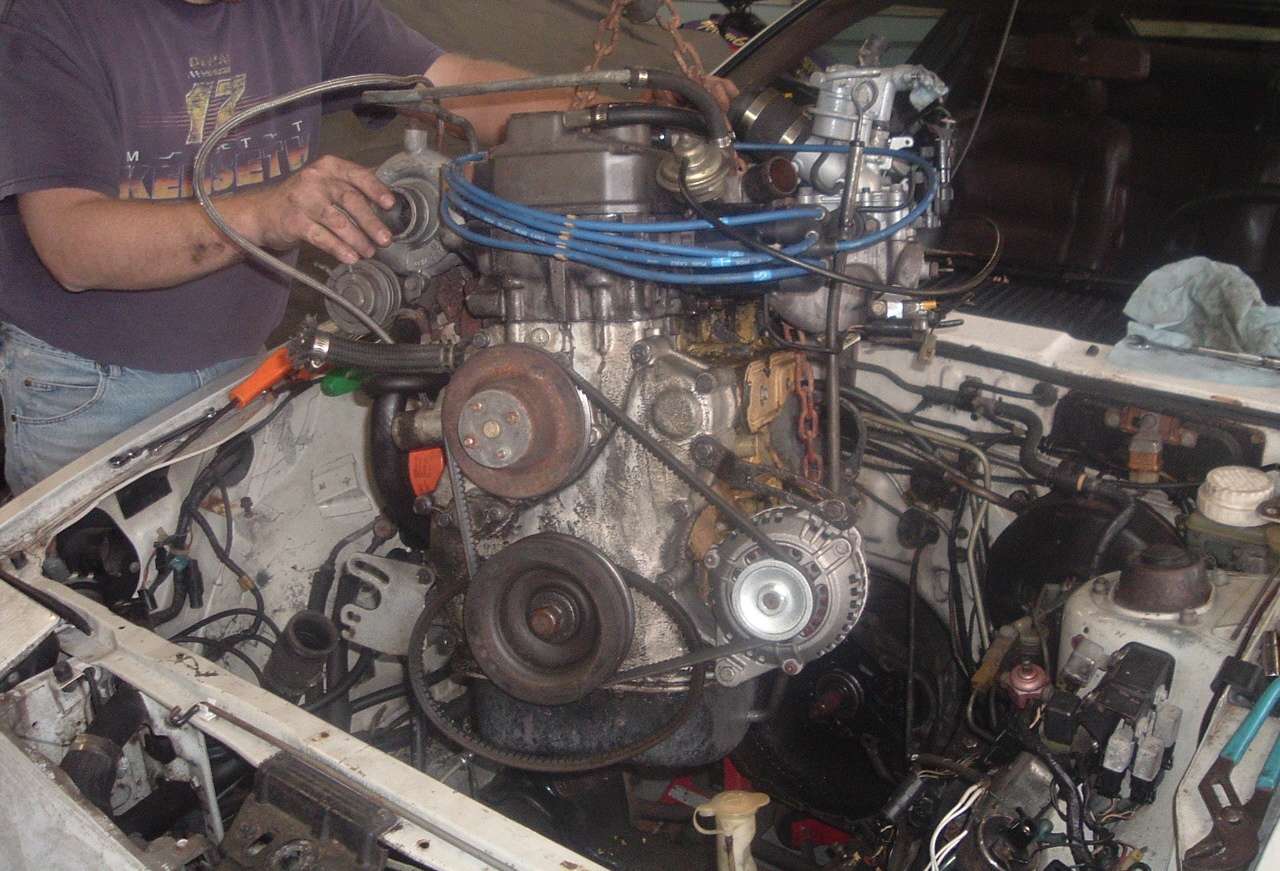 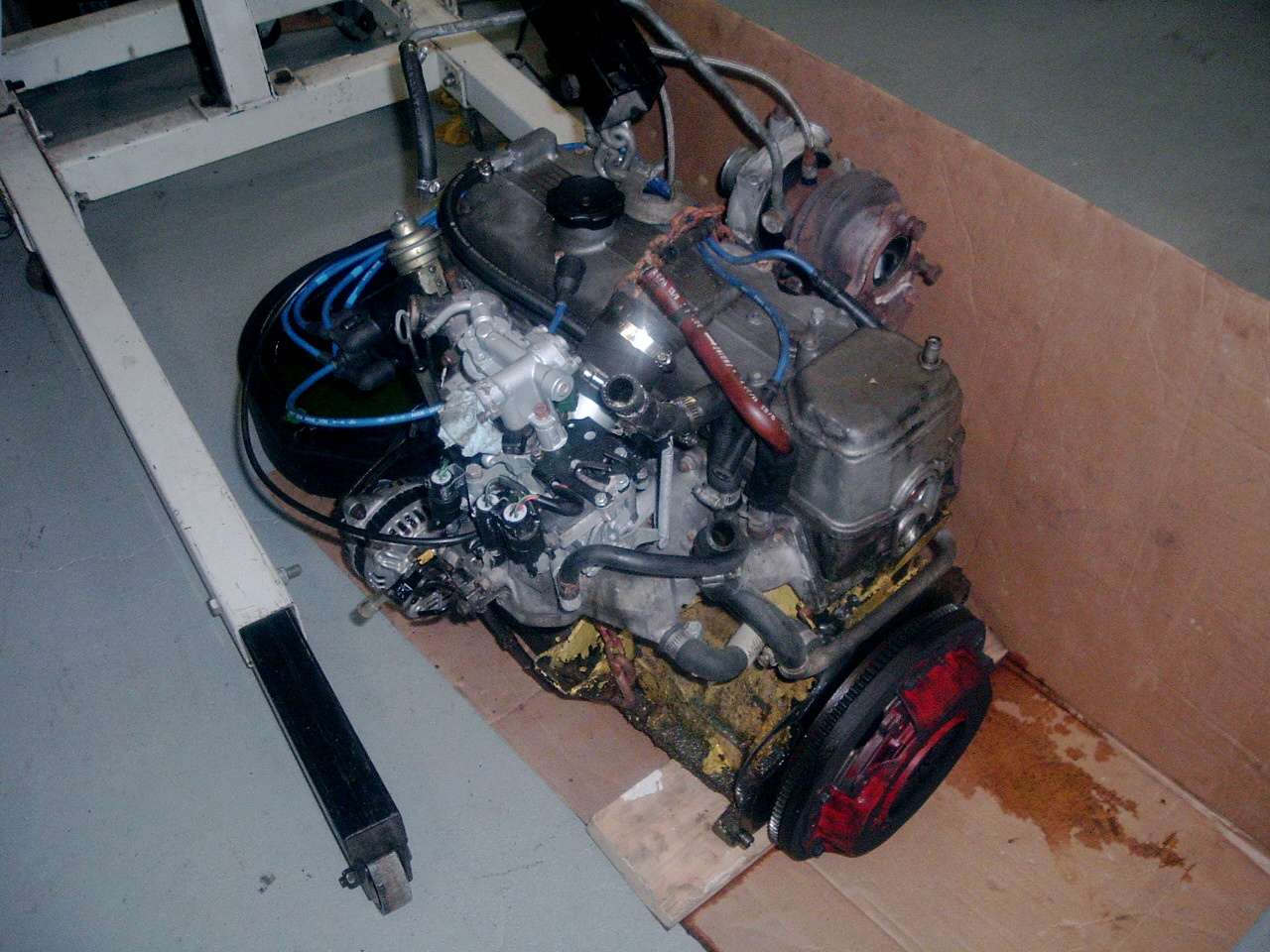 Kool, glad to see you started it, if ya need anything let me know im pretty close TB

I should have a more detailed update on this tomorrow.  I have a guy from the machine shop swinging by our shop to give me his opinion on the block.  I'm also going to be sorting through all the parts brackets, and accessories to determine what I want to have powdercoated.  I'll be delivering that stuff to the powdercoater on Monday.  All in all, things are moving forward.

After the machine shop guy examined the block today, it's looking like it will be just fine w/ a hone.  He actually commented that he was impressed with the condition for a 20+ year old motor.  Rod #2 looks like somebody was whacking on the cap at some point with a hammer, so I'm going to replace that rod and cap, but other than that, a fresh hone, new rings and bearings and we should be good to go.  Because there seems to be pretty clear evidence that this motor has been worked on / tampered with, before I order rings and bearings I want to get everything apart and take measurements just make sure the crank hasn't already been turned or the cylinders bored before.  I'm away this coming weekend, but I'm hoping to get to that the following weekend.  In the meantime I'll probably work on cleaning up this block.  It's pretty gross, the yellow has got to go.

Here's the pics of the motor stripped down to the block I forgot to take before. 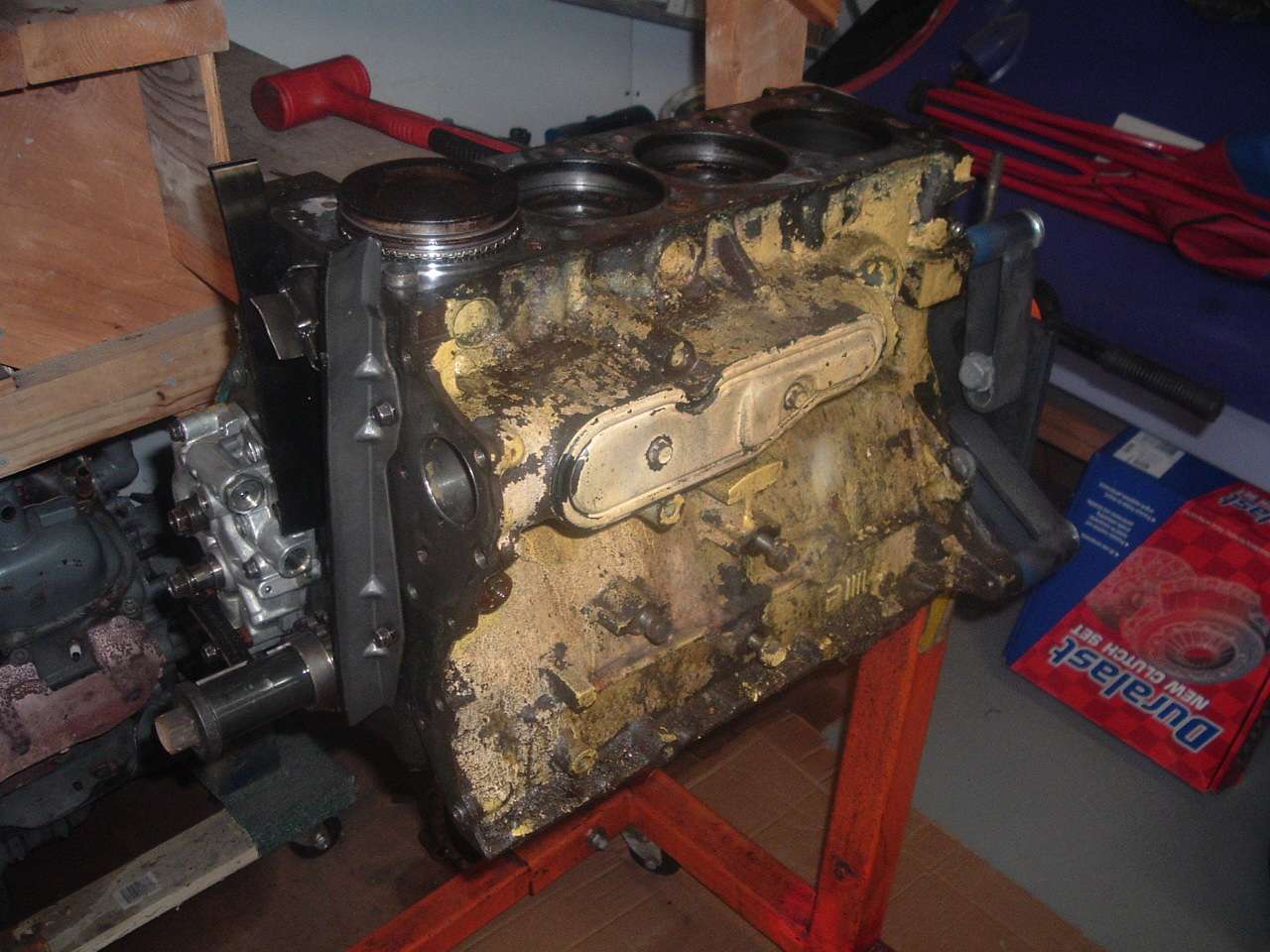 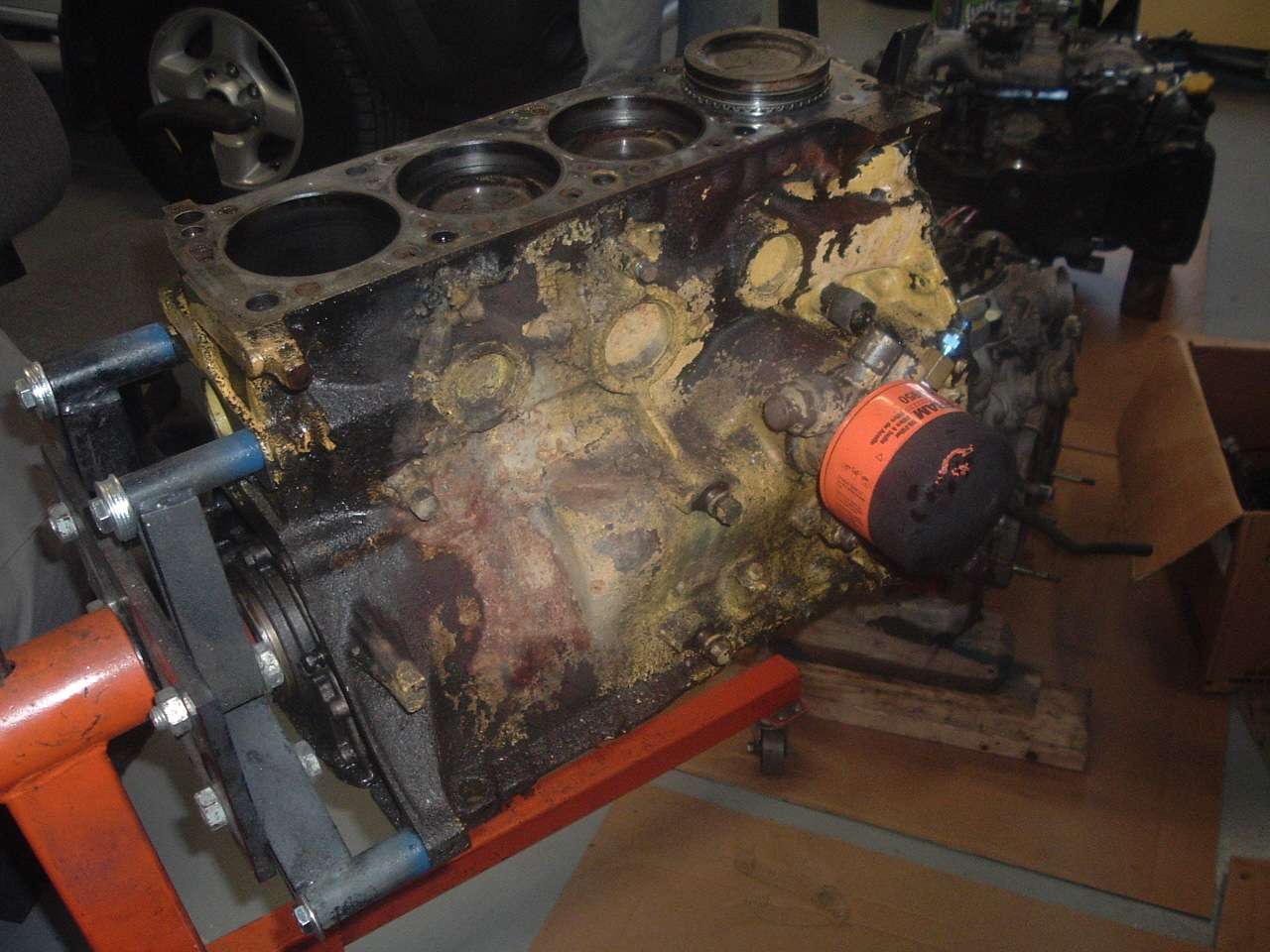 I'll probably have the IC piping done as some point along the way too, but for now I'm trying to concentrate my efforts on the motor. 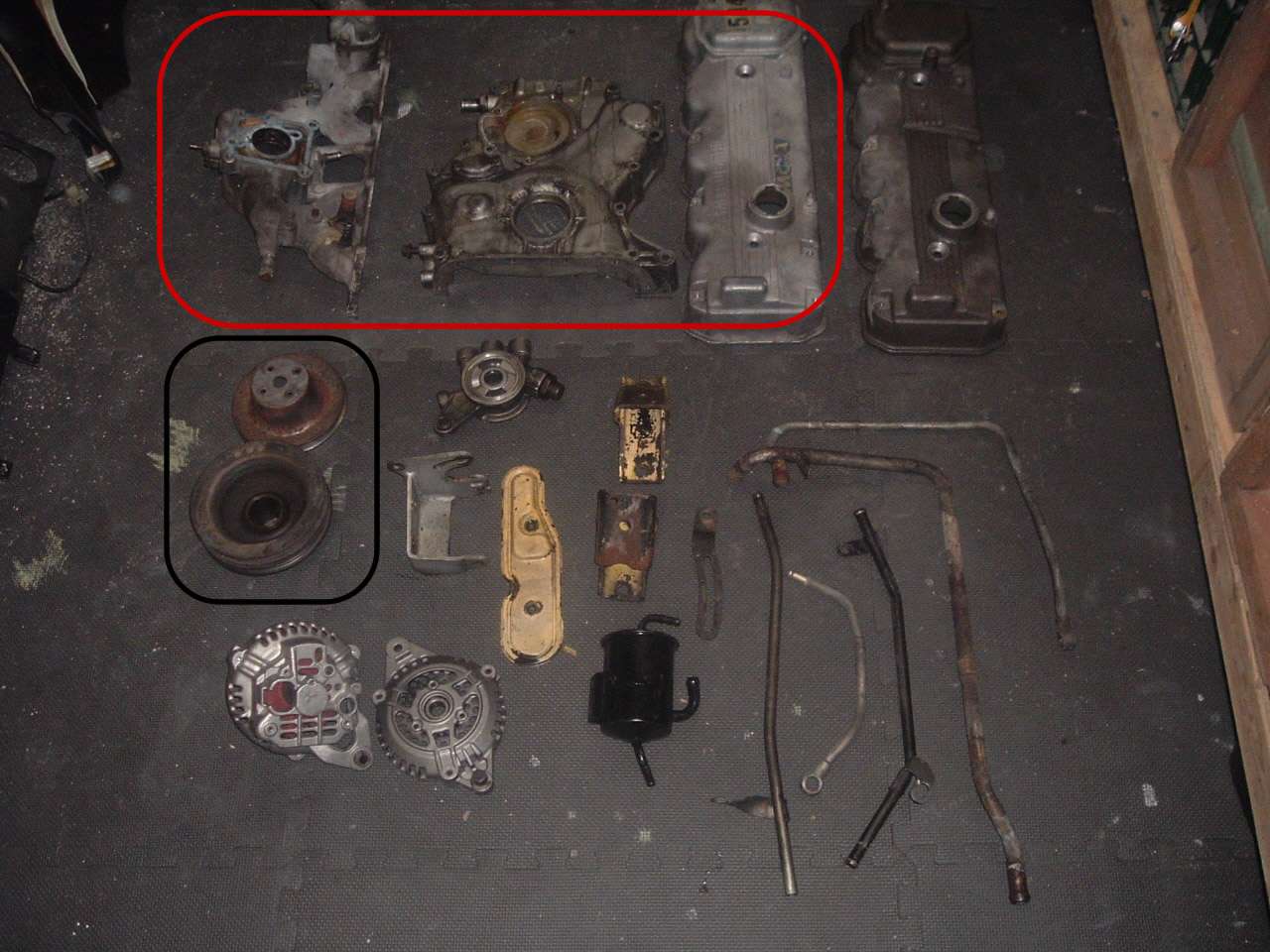 Wrinkle red will look fantastic. That's what I wanted mine done but the guy wouldn't do it for me, said it would get dirty and not clean up easily.

Too funny.  They actually told me the same thing today.  Once I reminded them it wouldn't be a daily driver - just shows, then they were cool with it.

Yeah, it sucked cuz I really wanted the wrinkle red.

I've got a handful of spares though, I may go back with one and have it done anyways, just fight the guy, haha.

Had a chance to work on the motor a little bit this weekend, not as much as I had hoped though.  The radiator blew in my truck, so I ended up spending a good chunk of the day replacing that.  Anyway, I was able to pop out all the pistons.  It is becoming overly clear why the car wouldn't start.  All 4 rings in the top ring position on all 4 cylinders were busted (see photo below).  I'm not sure why ... age or somebody put the wrong ring size w/ too small a gap and they broke.  Don't know, guess I'll never know, but it will be built right when I'm done.  Next weekend I'm hoping to hone the block and take some measurements of the crank to see where things are at.  I'm looking forward to ordering new parts very soon and going back the other way.

I do have one question ... does anyone know what the stampings on the ends of the rods mean?  I have a spare set of rods out of an 88 Starion - 3 are labeled F, one is labeled E.  The rods out of this motor are labeled Q, D and 2 are labeled W.  If I don't get answer here, I'll post up the same question in the VM. 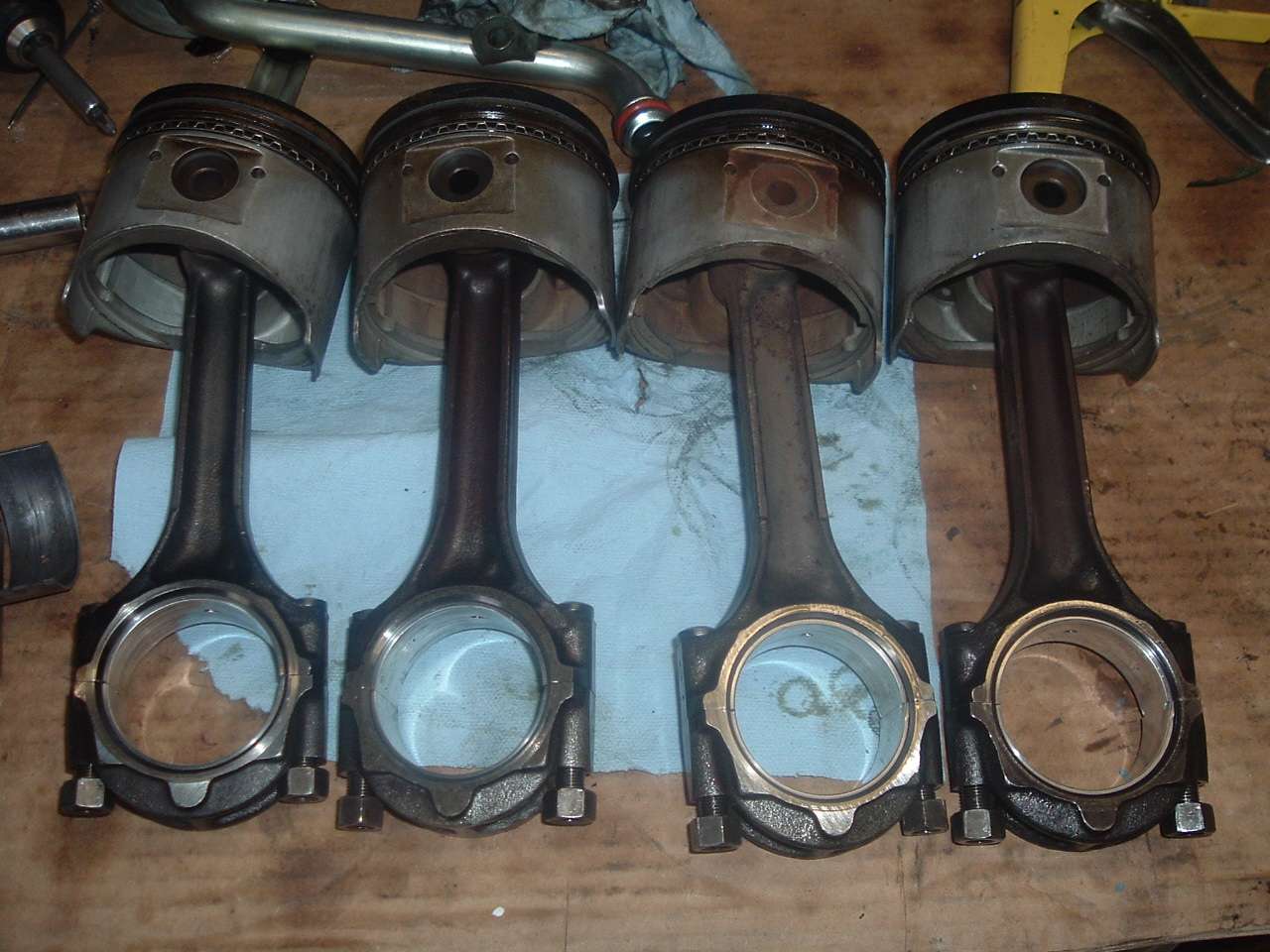 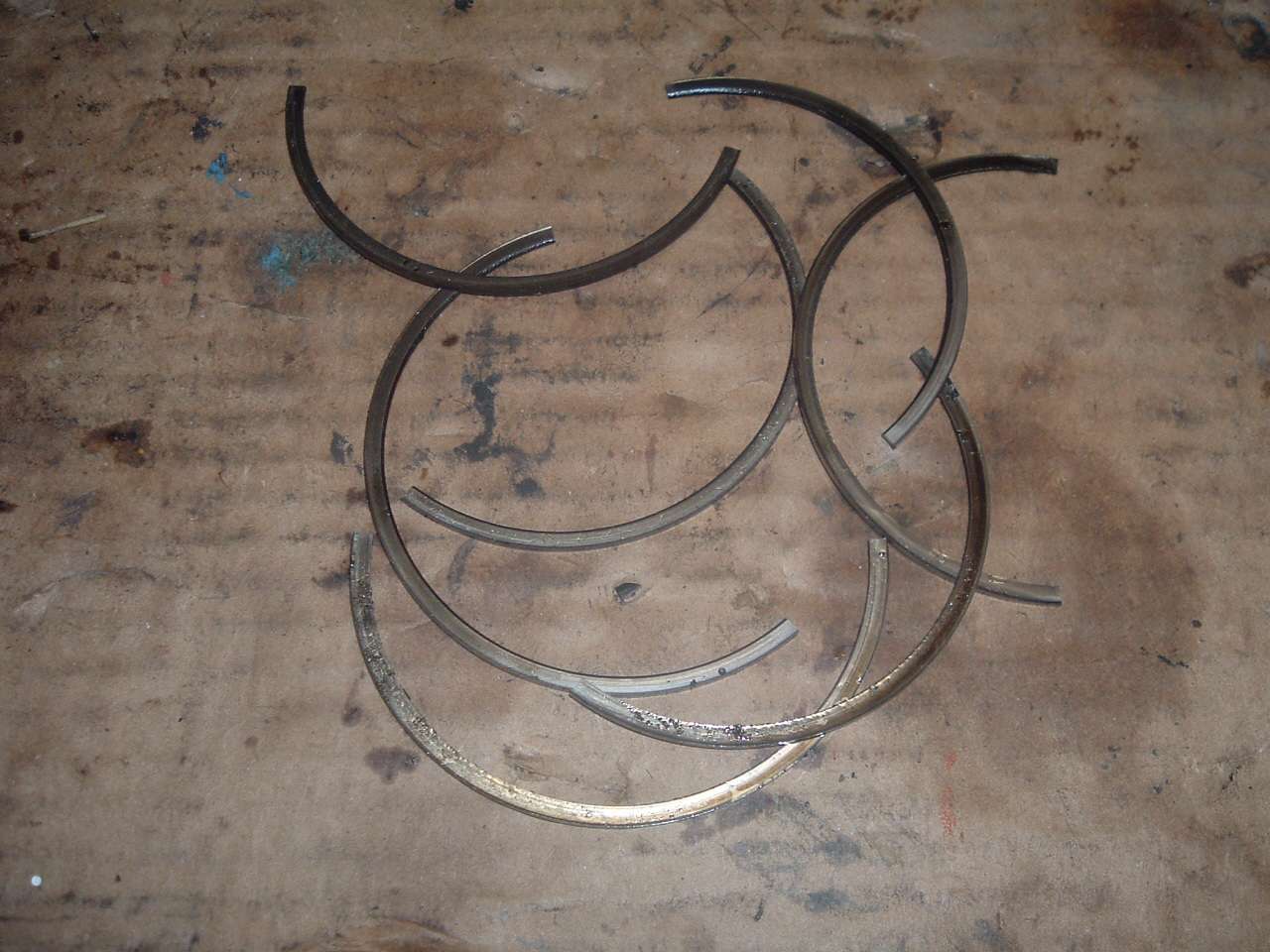 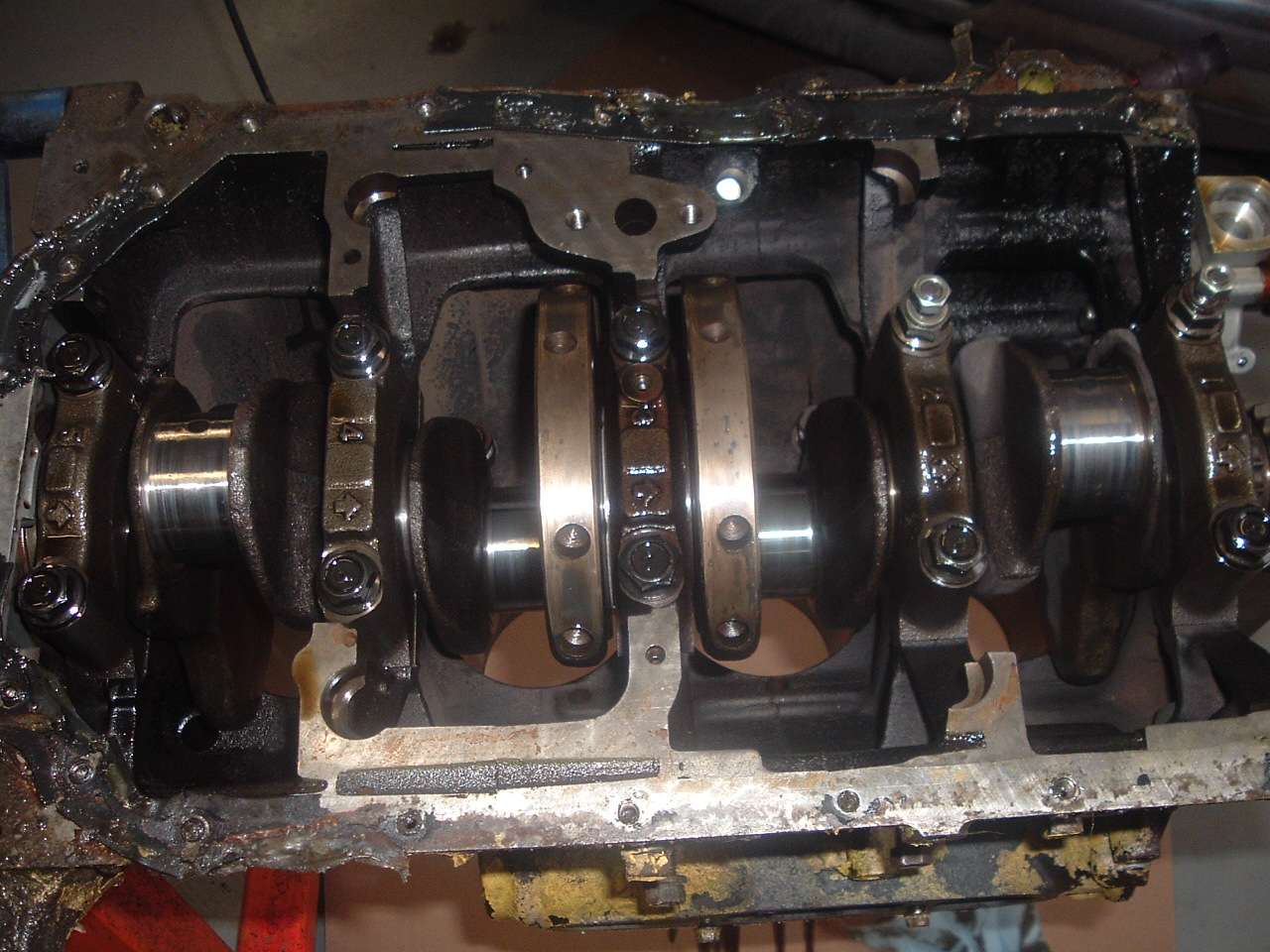 Your on a roll keep the pressure on.

Sometimes the rods are like that its ok.  If you see a rod with these markings this is a warranty replacement block and the rumor is it was from the AU engine plant not from Japan and not the same quality.

Crazy, I might have a mix of rods in my motor then.

"not the same quality"

They claim those AU blocks crack, the deck and the water jacket

So, Indiana, by "these markings" you mean the V and the X and the number (looks like 508) that are molded into those rod caps.

Yeah ... I don't have markings like that.  Mine are just random letters.

Did u get the stuff back from powdercoat...

Nope, hasn't come back yet.  He was about a month out when I  dropped it off.  We're at about 3 weeks now.  I knew it was going to be like that, which is why I dropped it off early.  I still have finish up with the bottom end before I start putting things back together, so I have some wiggle room yet.

I'm heading over to my father-in law's shop in just a few hours to hone the cylinders.  I'll also be taking measurements of the cylinders, crank and rods to figure out whether out any of this stuff has been bored or turned previously.  Which means, once I have that all figured out I'll know what size rings and bearings to order.  Then we'll really be moving forward.

This past week I started working on cleaning up the block.  Even though the yellow was flaking, it doesn't want to come off very easily.  Pain in the neck.  I'm basically using a combo of a wire wheel and a scrapper .....  Here's the one side almost done: 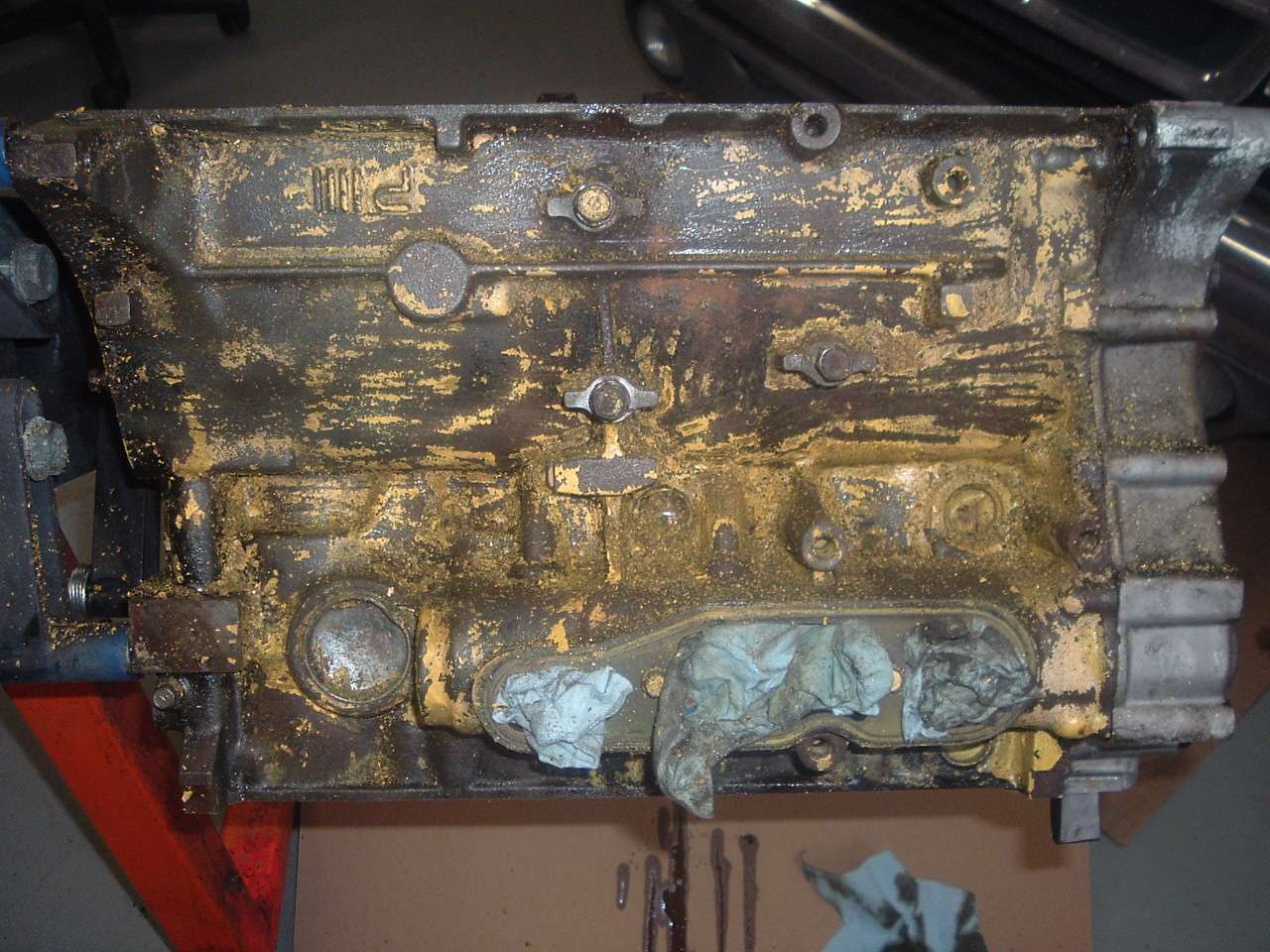 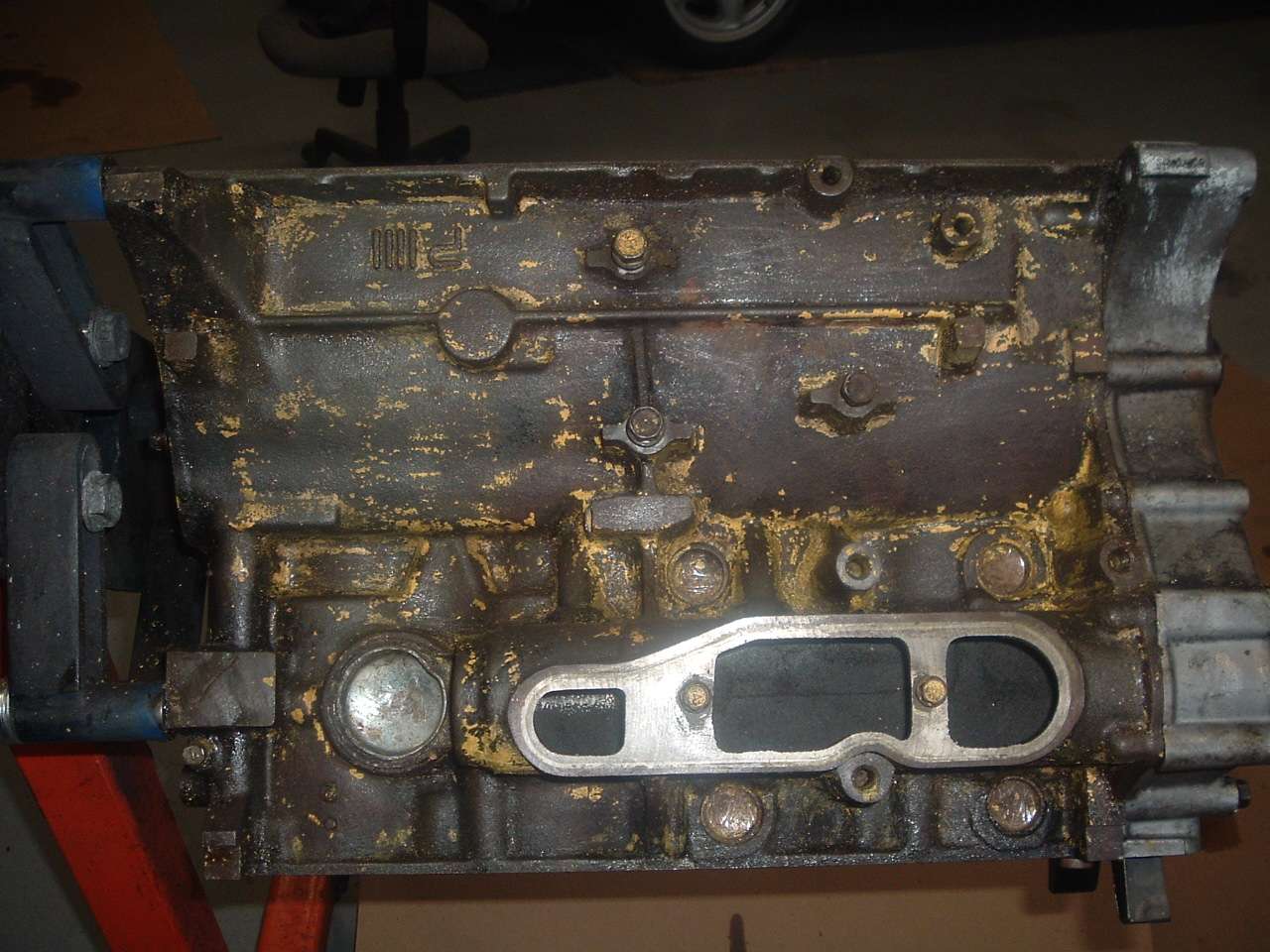 Oh, and the powdercoater touched base .... everything should be done next Monday (Feb. 2/13)  I'll pick it sometime after that and post pics.

Things went really well yesterday.  The cylinders are now honed, freeze plugs knocked out, and measurements have been made.

I did discover that the crank has been turned once previously, it's 10 under stock.  Unfortunately, whoever worked on this car previously did not take proper "cleaning" precautions during the build b/c the crank bearings and the crank are scored pretty bad again, and it doesn't look to me like the bearings are all that old.  Due to this, I will NOT be reusing this crank.  Luckily, I have a spare STD size crank that is in mint condition that I will use instead.  I took some pictures of the scored bearings, I forgot to take pics of the scoring on the crank.  I have pics of the hone on the block I will post later as well.

Next step, take the block to be hot tanked and magnafluxed.