Backed my eclipse out of the garage today randomly and thought it looked pretty sweet sitting there, so I snapped a picture of it: 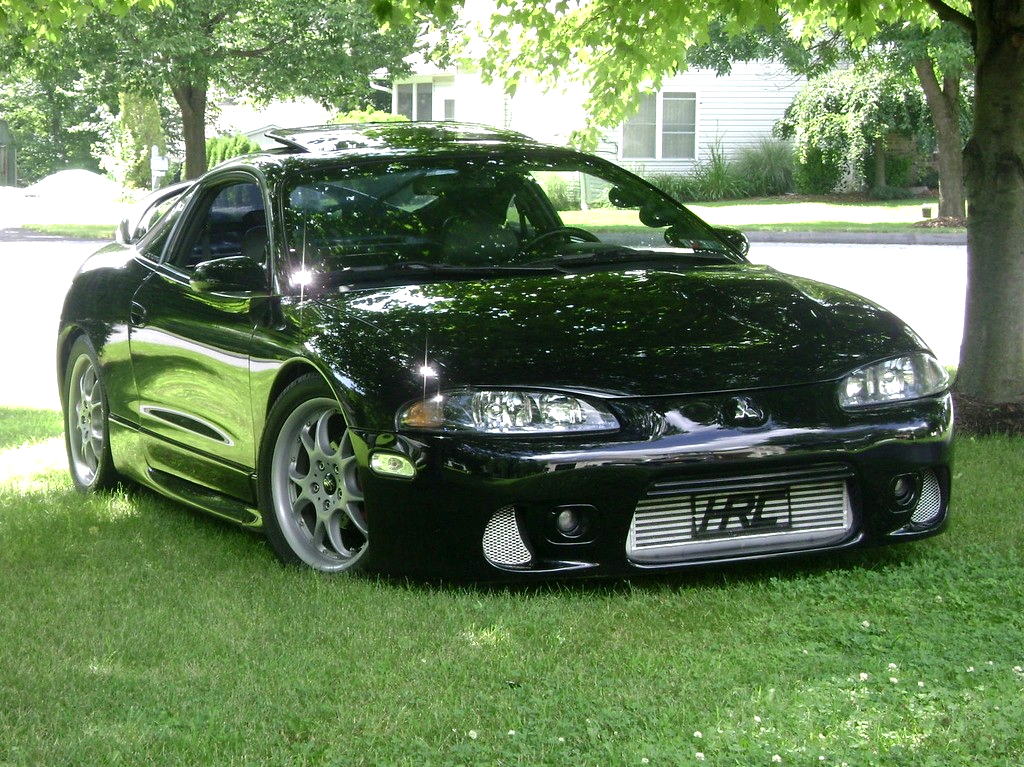 Still looks good at 14 if you ask me.

EDIT: Had to fix the picture link, it was broken

Damn nice car. What's the specs on it?

It does look good!

I have a bare 1G 6-bolt sitting in my garage on a stand that I bought about 7 years ago with plans to build and do a swap, just haven't got around to it since I got into Starquests.  The head is built, but I'm running the stock 7-bolt bottom end.  Had it tuned and dyno'd at R/T Tuning in Lansdale PA last summer.  I'm putting down just north of 300 and running mid to low 13's at the track.  Fasted mph was just this past spring at 108 I think (gotta check my slips).   I run Dunlop Z1-Star Specs on stock rims at the track.  I'm running a hybrid Hahn Racecraft Turbo w/ a 16G cold side and 20G hot side.  I think with a bigger turbo I could easily put down more power and get into the 12's, but, again, all my money is in Quest's right now ....  My favorite part about the car: Owned it since July 2000 and have 56K on the odometer.  It always gets a lot of attention at shows as I've tried to modified "tastefully" over the years.

You're getting me all 4G63 happy again

So, I've been a little bit more quiet on this board as of late, but that's b/c since I have the Starion at a decent point I've turned my attention back to my Eclipse.  Some of you that know me, know this already, but I have been dying for about 8 years of so now to attempt swapping my GST to an awd GSX.  In early 2017 I bought the donor car below I got lucky and found on CL and I've been slowly chipping away at it ever since.  You guys might even remember this car b/c I think I posted up about it when I got it:

Anyway, for those of you that might be interested, I've been working on a swap thread over on DSMtuners.  Here's the link for your viewing pleasure. http://www.dsmtuners...#post-153705392 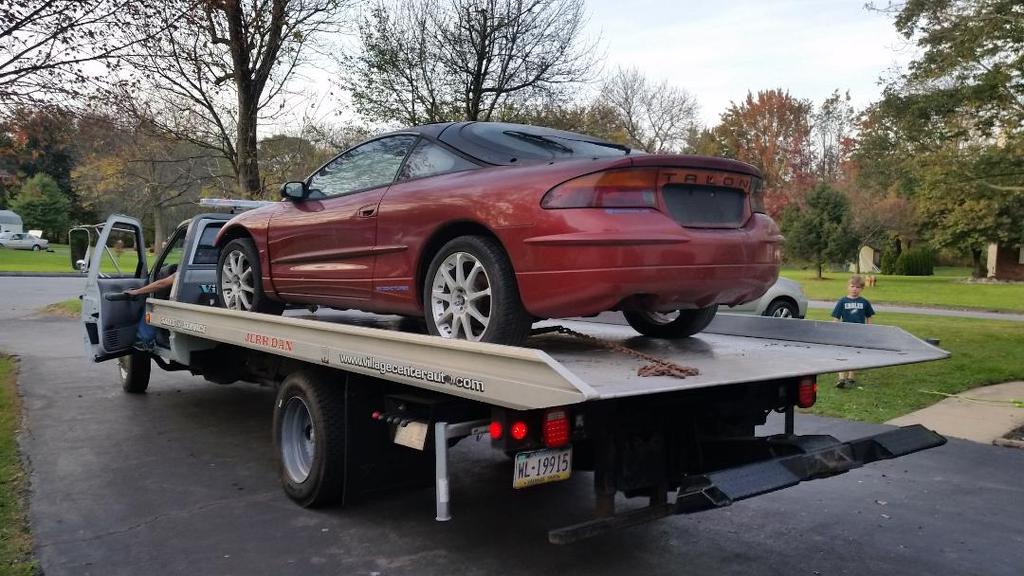 Thanks Import!  I cannot wait to finish up the GSX swap.  It's going to be such a beast when it's done.  I hoping to get the gas tank rewired and installed over Thanksgiving.

Cool  car for sure! I got a ticket in one and wasn't even driving it lol. My idiot buddy thought he would light it up right across from police station. Guess what?we got pulled over and l didn't have my seat belt on 2nd offence in 6 months lol $265 was alot of money for a kid like me working part time deburing parts at local machine shop at the time. All to impress some ladies that where walking down the street and show off the eclipse. Good times.

It took me about 2 years from front to back, but I finally finished the GSX swap on my GST Eclipse.  So happy it's done, so I can turn my attention back to the Starion. 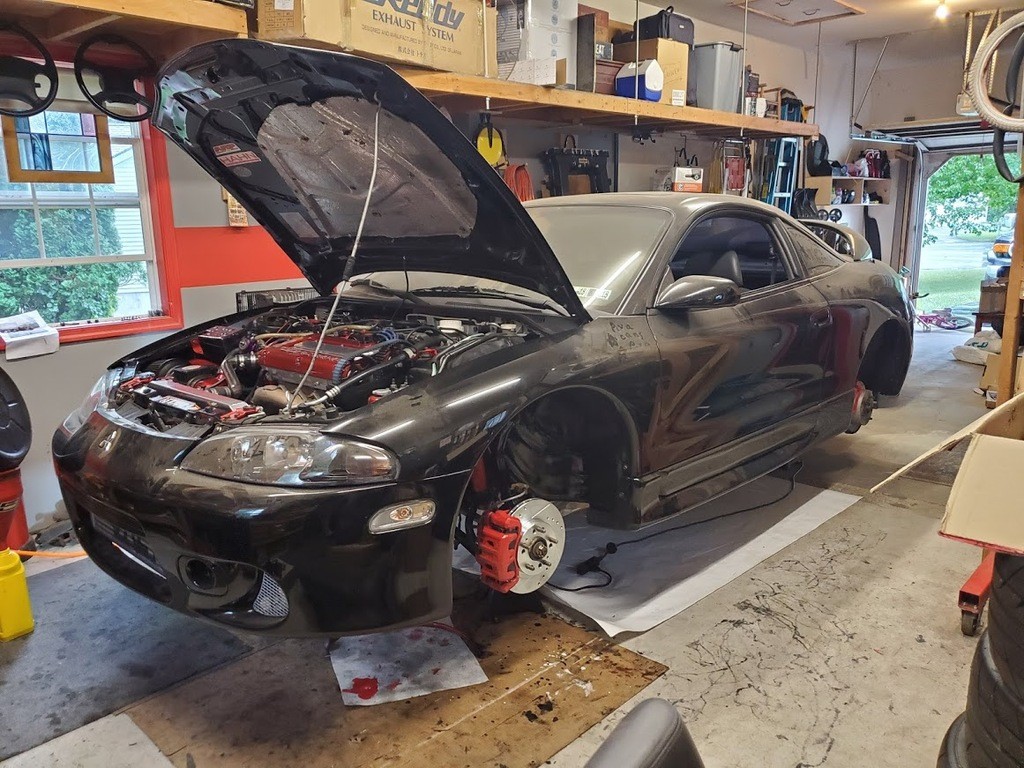 In the process I refinished and undercoated the whole entire underside of the car. 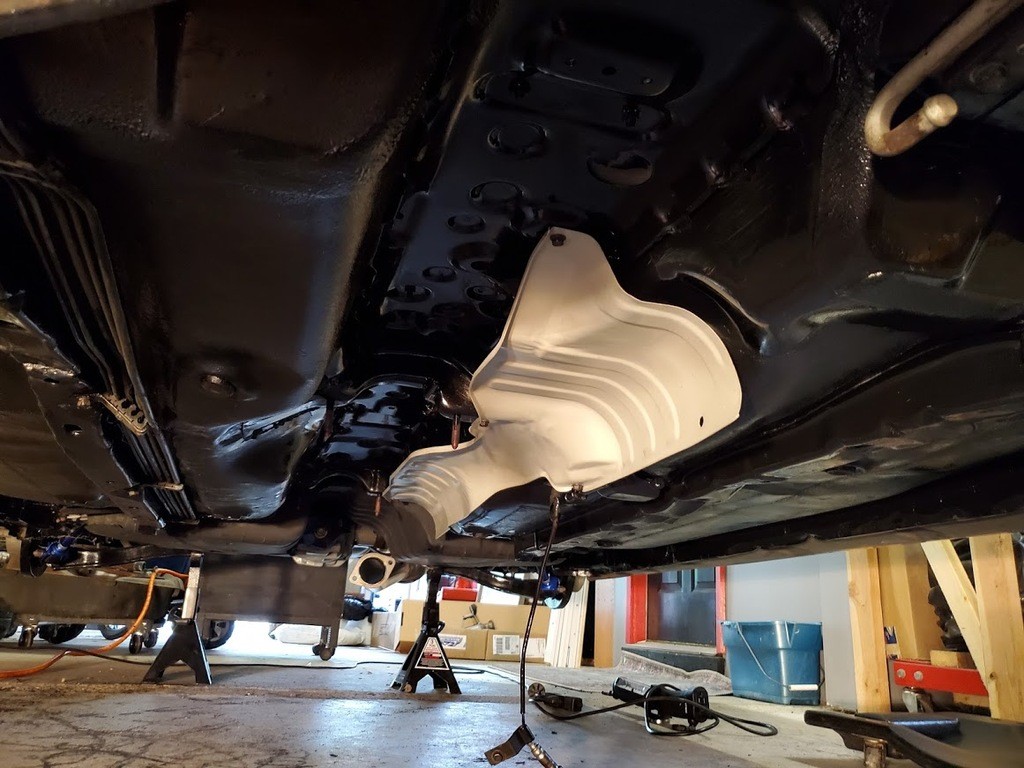 Spent a lot of time cleaning up and replacing minor parts on the AWD transmission. 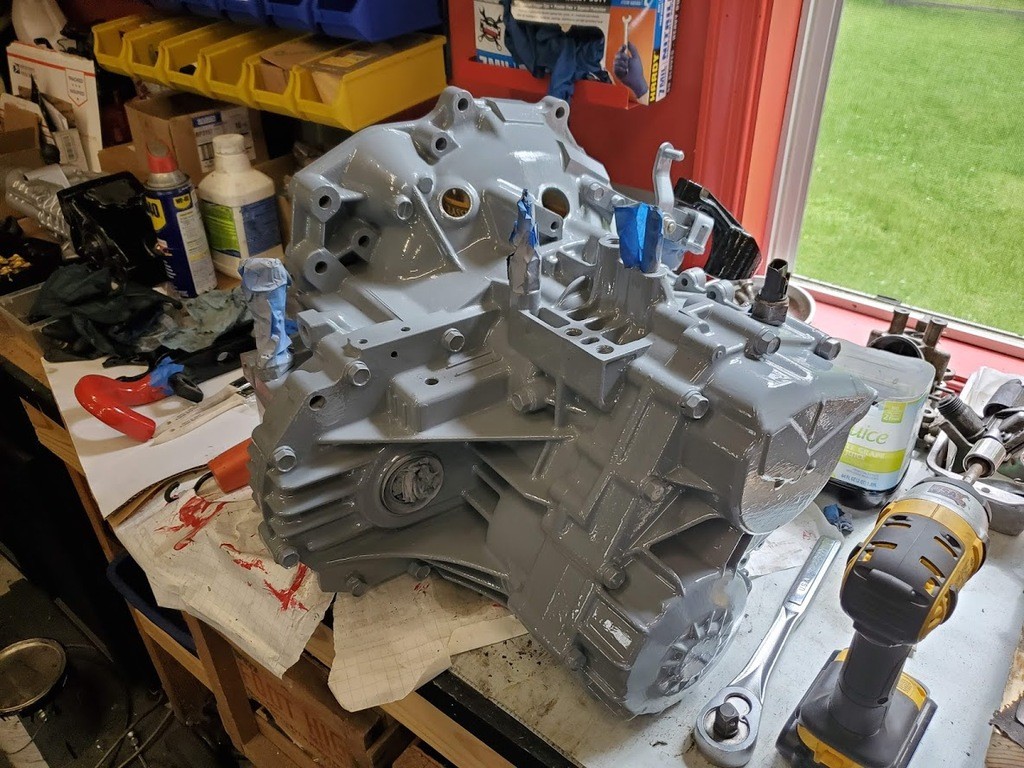 Rebuilt all of the rear suspension.  New bushing, and tublar upper control arms I had powdercoated. 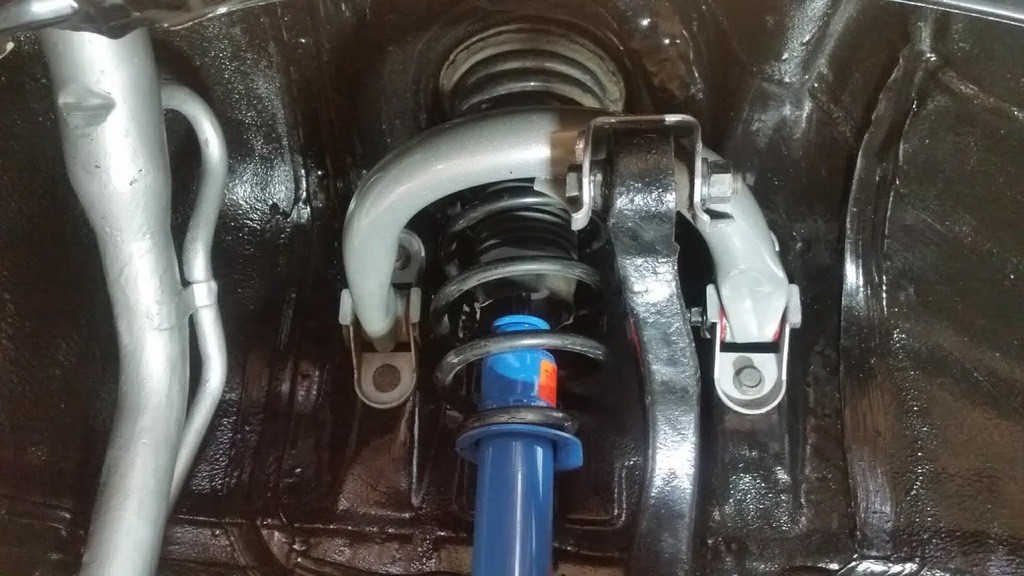 And, of course, rebuilt the GSX donor rear subframe. 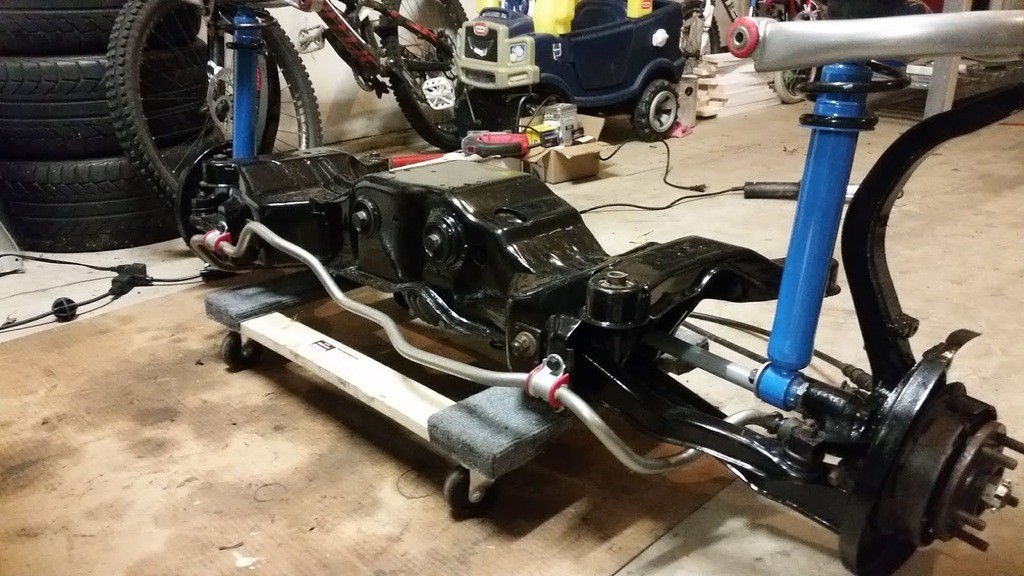 Well, you get the idea ... you can follow the link I posted above last year if you want to see the whole thing from beginning to end.  I dropped it off 2 weeks ago to get an alignment done and have the fenders rolled.  Very excited to have this project done and how well it came out.

This pic is from a few days ago parked at my friends house.

It's kinda a strange thing.  I look around at the interior, and everything tells me it's my car that I've had for 19 years, but it doesn't drive or feel anything like my car.  At normal speeds it feels pretty much the same, but under acceleration it's crazy different.  All the power just goes to the wheels and there's no torque steer.  I can't wait to hit the track next spring / summer.  I haven't been in a few years now.  I'm gonna have to re-teach myself how to launch.

always wanted a GSX 2nd gen eclipse..  had a FWD 1GA talon, i put way to much time and money into, onyl to have the belt jump every damn weekend, new tensioner, even gates blue kevlar belts, didn't matter, weekend would come around and i'd try to dial it in, and BAM jump teeth and the forged pistons would kiss the valves. never had a bottom end problem, never bent a rod when it would do it either.. ( eagle H beam rods, JE 9:1 pistons had it all balanced at the machine shop) i finally gave up on it after it sat for 5 years and i never saw myself having the money to put it back together and get it running after the injectors stopped working when my buddy lied and didn't unhook the battery when we went to install the alternator.

wish i kept it around now though. years of automotive experience and career change, and i am pretty sure it was the damn resistor box on the firewall that went kapoot...

when it did run though WOW! it was crazy awesome with the B16G turbo, 3 Grand  that thing would be spooled and just insta peg the tach in 1st and second gear.

oh well i still have the conquest, and it's taking the place of the talon for project car. besides, chains are better than belts IMO