Should I keep the AC or remove it?


16 replies to this topic

So I am in the process of removing items to replace my front clip and have to remove AC lines. The AC did work when I got the car. But appears had a leak since their was no freon in the system when I took the lines off.

I am in SoCal so it gets HOT, but its only for a couple months. The rest of the year is great. I am not to concerned with, if I decide to sell later, someone saying "it has no AC, forget it". You dont buy these cars for AC. lol

Do you have a lady that likes to go places with you? She may not want to ride in hot car. I ripped the AC out of my old Nova many years ago, and my girl wanted nothing to do with it on hot days.

I would keep it

I think you need to base your answer on how often you plan or intend to drive the car.  I've owned a total of 4 Starquests, and I've never owned one with AC in it.  That was more circumstance though, not really by choice.  Victims of previous owners removing them, or just lack of maintenance led to failure of the system.  My current car is really just a Sunday driver and show car.  I might drive it to work a few times a year if the weather is really nice.  So, for me, it doesn't really matter than I don't have it.  I did the full AC delete duct modification when I did my restore.  If you plan to drive you car a bunch more, then you might want to consider it.  I think you really need to figure out how much use it's going to get and go from there.

All but my first Starion had air that worked, my wife wont be in the car much. Its just a weekend car. Hmmm, everything did work a while ago. I could take it out later on, not that hard.

Good to keep the parts on the car if you ever decide to sell it...possible help keep the value up.

I can tell you I still have installed in my 2G Eclipse, but I am unable to use it now with a FMIC.  Ever since installing a FMIC if I try to run the AC the condenser just saturates with heat and won't blow AC.  I almost overheated the car once not paying attention.  I don't know if you plan to run the OEM IC, or go bigger or something like that - but I know these cars historically have overheating issues.  Something else to think about.   The front of these cars definitely seems subject to much more air flow and being more "open" than a DSM is - so that's a plus.

The real question is - how much more HP will you get when you delete AC ?

I have a much larger FMIC and AC on mine.  AC works great and the engine doesn't overheat.  Unless you are building a dedicated track car, keep the AC.  I lived in SoCal.  It's hot there for more than a couple months.

I do plan on running a larger intercooler. 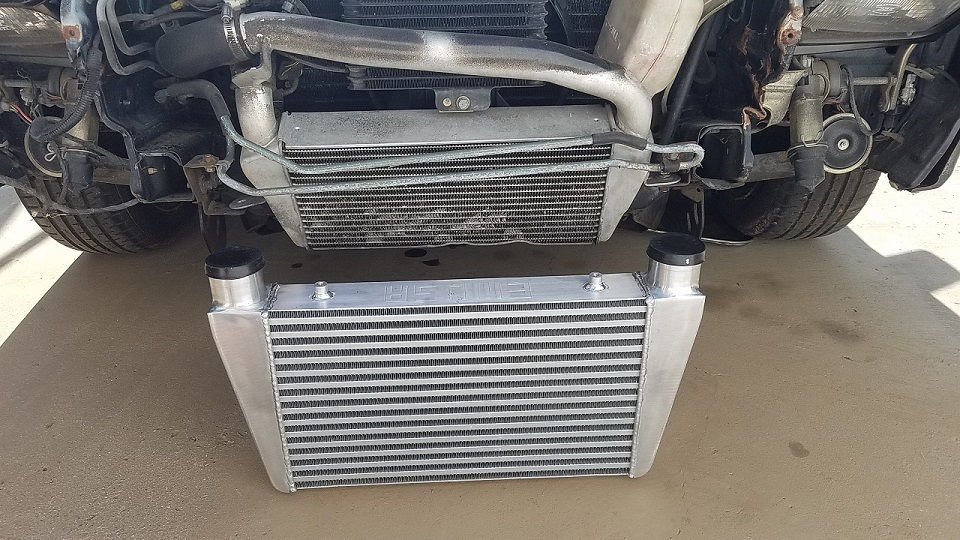 I do plan on running a larger intercooler.

I like that IC.  Who makes that one?  I just upgraded to the CXRacing ... but that one looks bigger.

I deleted my AC years ago and resealed all the HVAC boxes with new foam. Wasn't too bad when you were moving but at a light in SC humidity it was horrible. Add to that having rain and foggy windows you're kinda screwed. If you can keep it I would. You can always make custom lines to tuck the system and still have a clean engine bay.

techboy, its just an off brand on fleabay. Its 23x13x3 with 2 1/2 pipe. I got it since it fits where the factory one is and wont take to much to install.

UCW is that an Isuzu NPR intercooler?

UCW is that an Isuzu NPR intercooler?

Yes and it barely fits between the frame rails.

That is a monster!