This is part 2 of my Better Living Through Raiding the Hyundai Parts Bin series. Part 1 was the Hyundai Sonata Clutch Master Cylinder Upgrade, which is a cheap alternative master cylinder with a solid clevis to eliminate the soft rubber isolator in the Mitsubishi clevis.

So, in addition to the rubber isolator, the other things that rob clutch disengagement are the hole in the clutch pedal wearing oval-shaped, and also wear on the clevis pin. Lots of people have run into this problem before and come up with various solutions. The basic idea is to drill the hole out and insert a bushing to get it back down to the size it should be, 10mm. I am more or less copying what kev did, but since the Mitsubishi clevis pin is discontinued, I am using the Hyundai OEM clevis pin, which is the same diameter, and also throwing a couple other Hyundai parts in while I'm at it.

One tip that might help anyone removing the whole pedal assembly for the first time--if you're wondering why it's not coming out, you need to remove the upper nut on the clutch master cylinder! I think it's also possible to just remove the pedal and leave the bracket in the car, but I found it easier to just remove the whole thing.

No point in showing the oval-shaped hole in the clutch pedal, plenty of people have posted pictures of that already, or if you haven't done this mod yet, just look at yours! Here's what my pedal looked like after I drilled it out: 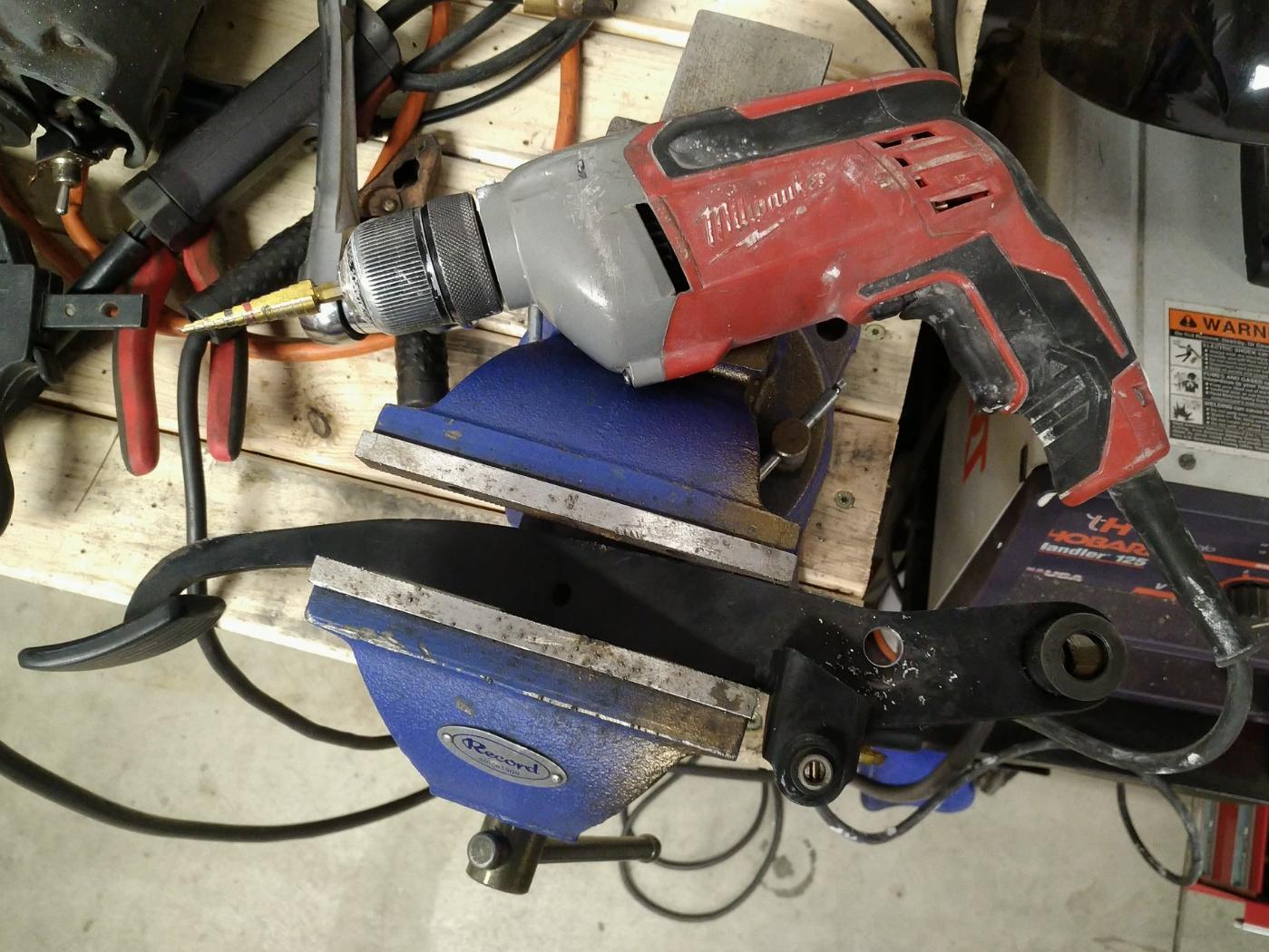 I used a step bit from Harbor Freight; the 2nd-largest size is 15/32". If you're using a hand drill, I recommend using a step bit like this, because it's easier to keep it to one side of the hole, so you don't end up drilling a new, larger hole at the center of the worn oval instead of where it was supposed to be originally. The next step on the bit also leaves a nice chamfer on the hole to make the bushing go in easy. The steps on my bit weren't quite deep enough, so I had to drill from both sides, no big deal. Excuse the messy workbench, too many projects going on at once...

This is the bushing I am using. It's a generic steel-backed, teflon-lined bushing from eBay. It has a 10mm ID and a 12mm OD, and is copper plated for some reason. Pretty much just a cheap Chinese version of the bushing from McMaster that kev used: 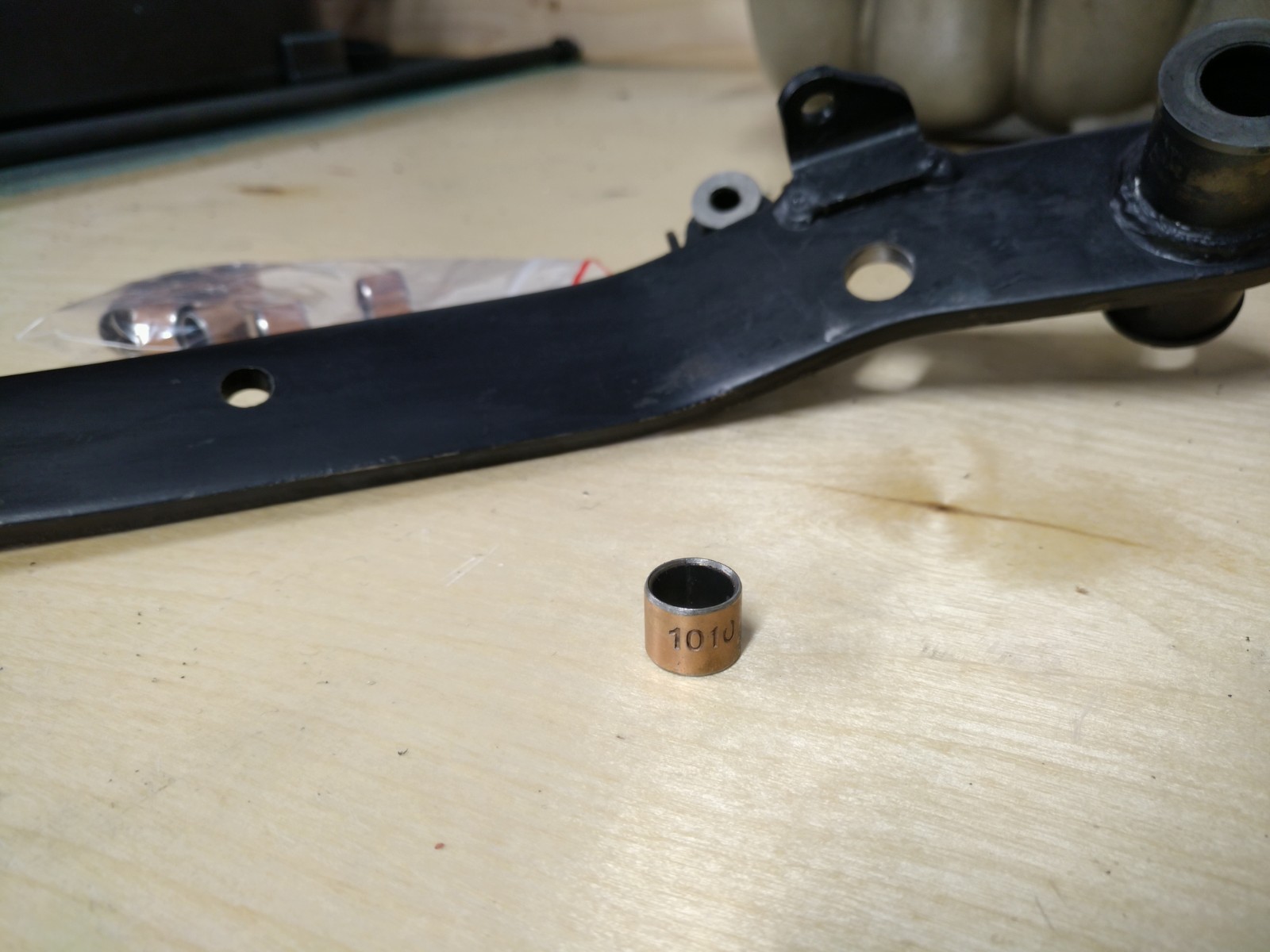 I just balanced the pedal on a deep socket on the workbench and knocked the bushing in with a small hammer. The 15/32" (11.9mm) drill size makes the 12mm bushing a nice press fit: 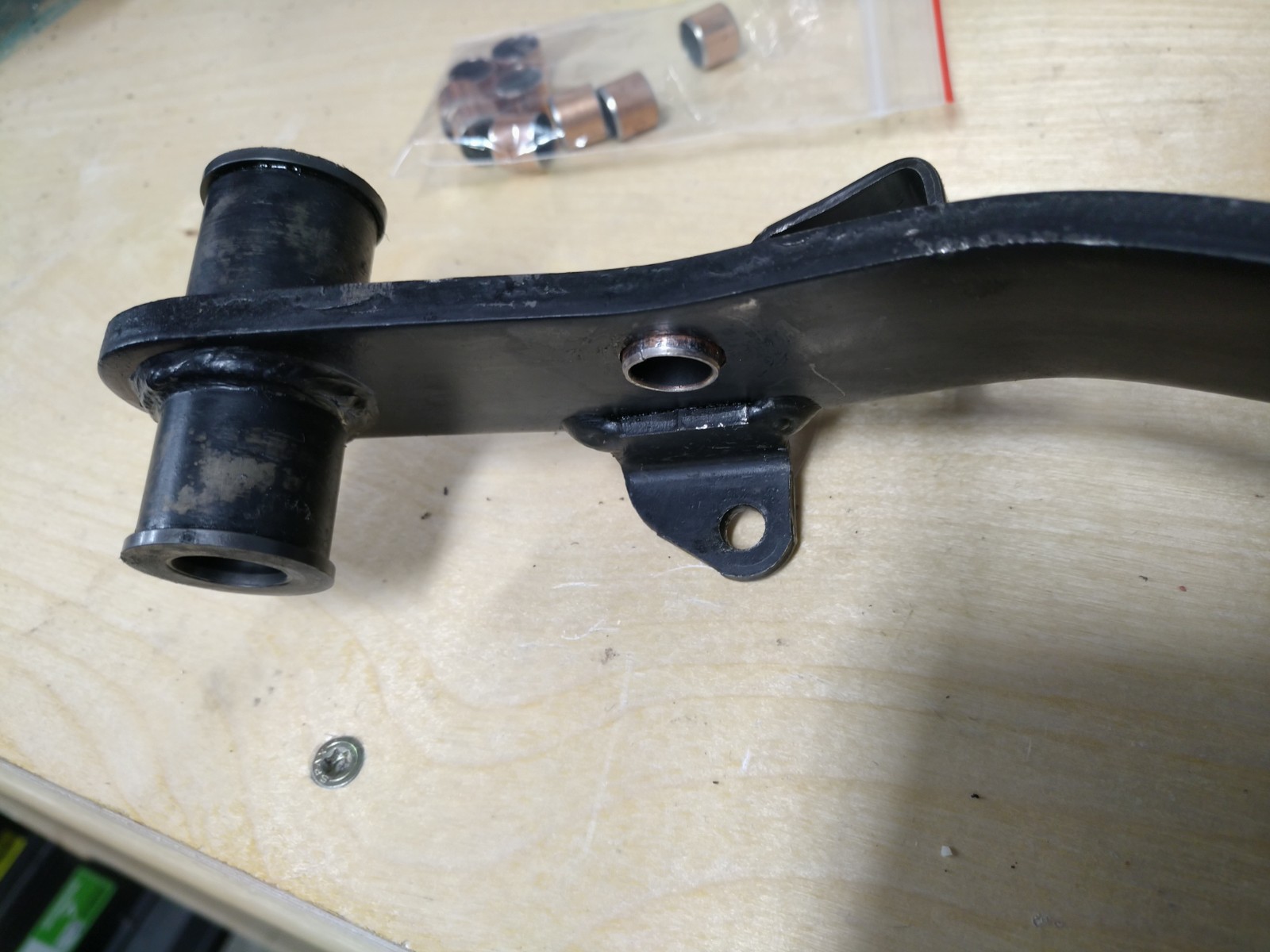 I then dremeled and filed the extra width off the bushing: 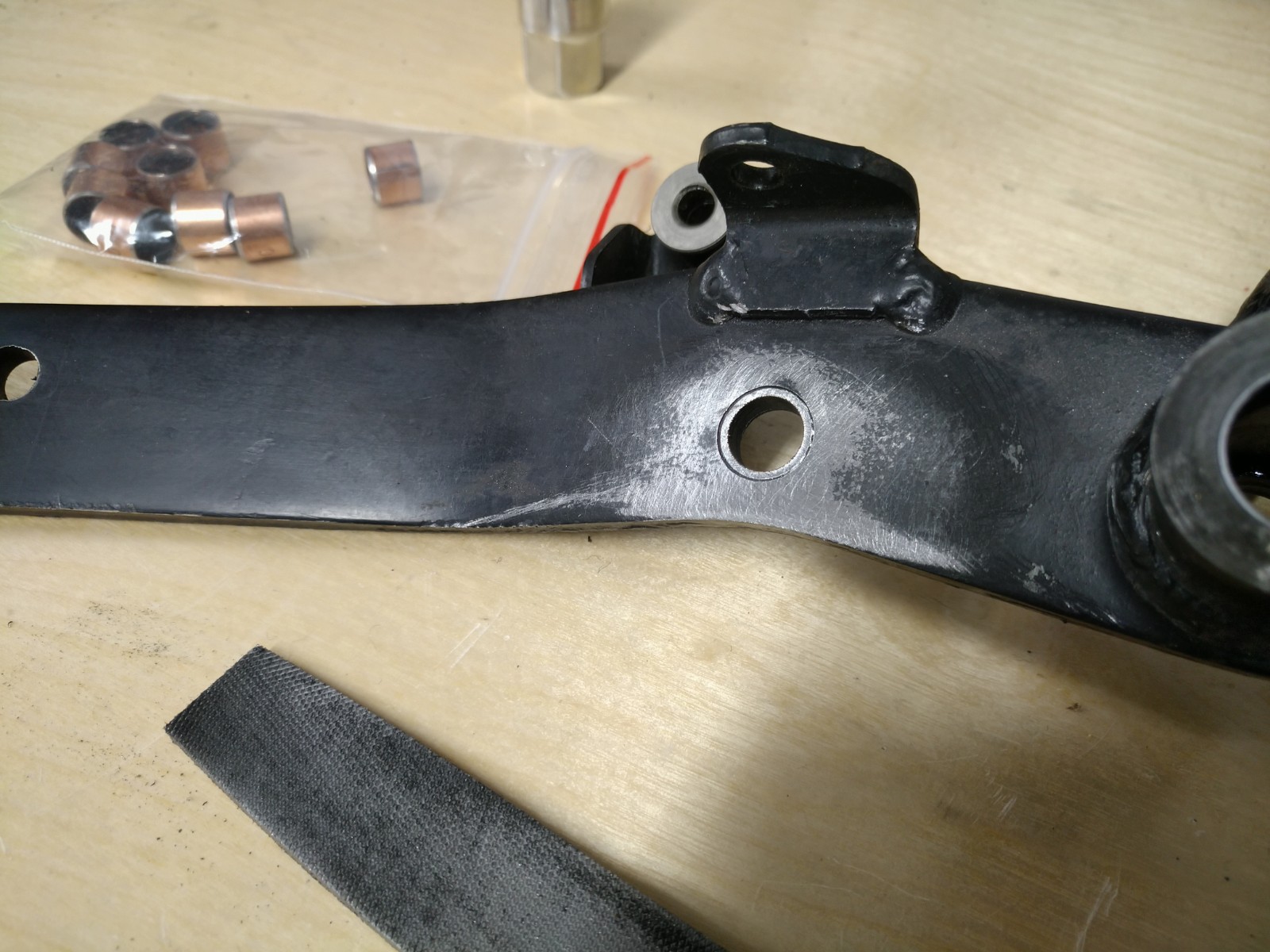 Here's how badly my old pin was worn: 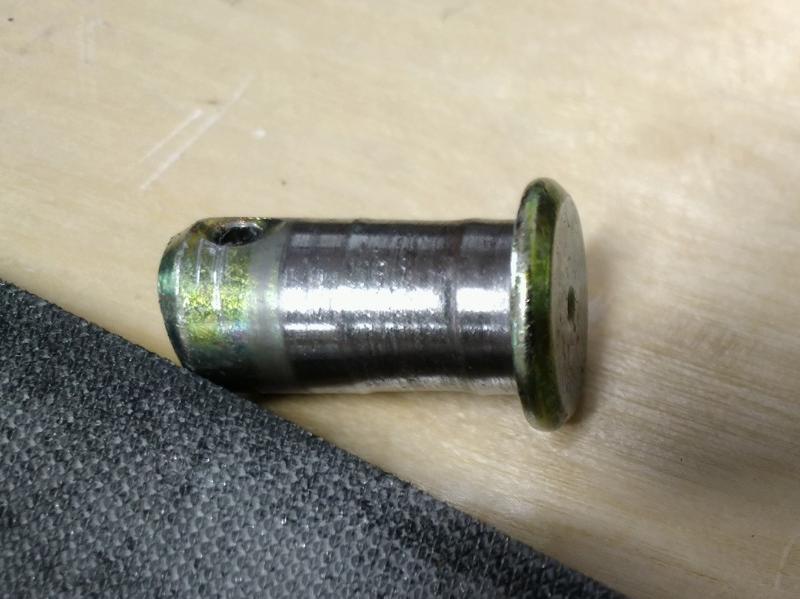 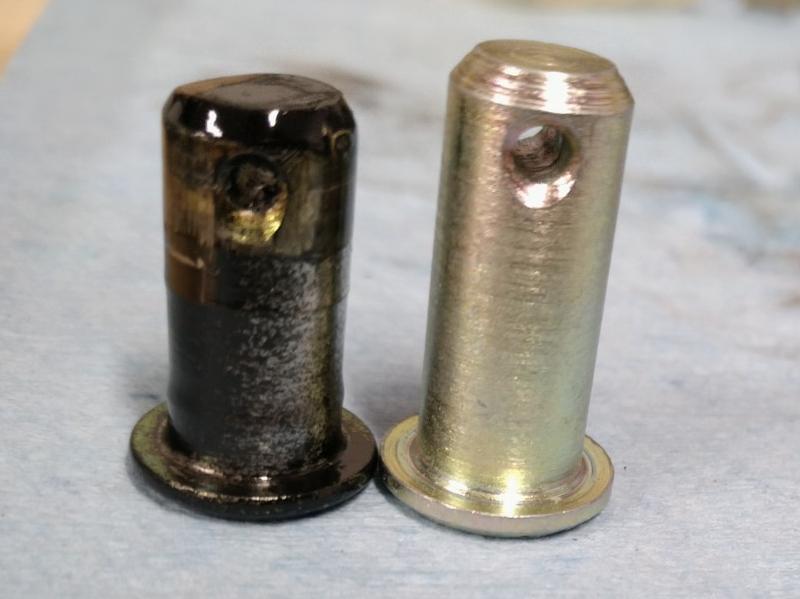 Here's another part on my pedal that was worn; the plastic button for the clutch switch/pedal stop. Mine was mashed down, cracked, and about to fall apart: 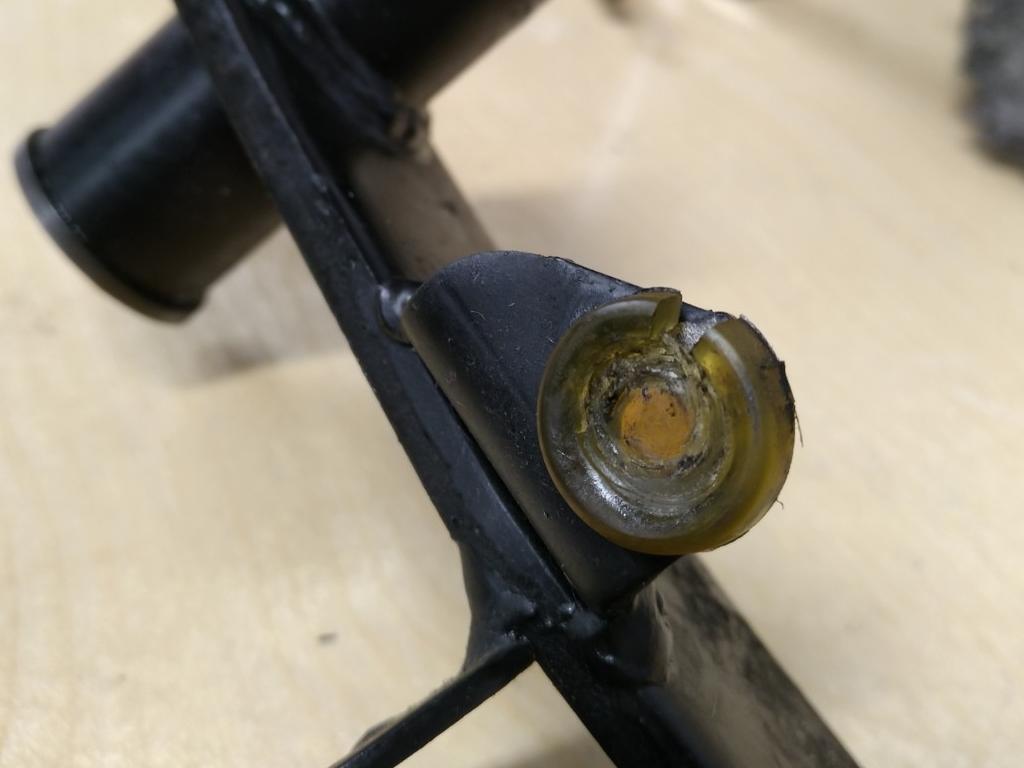 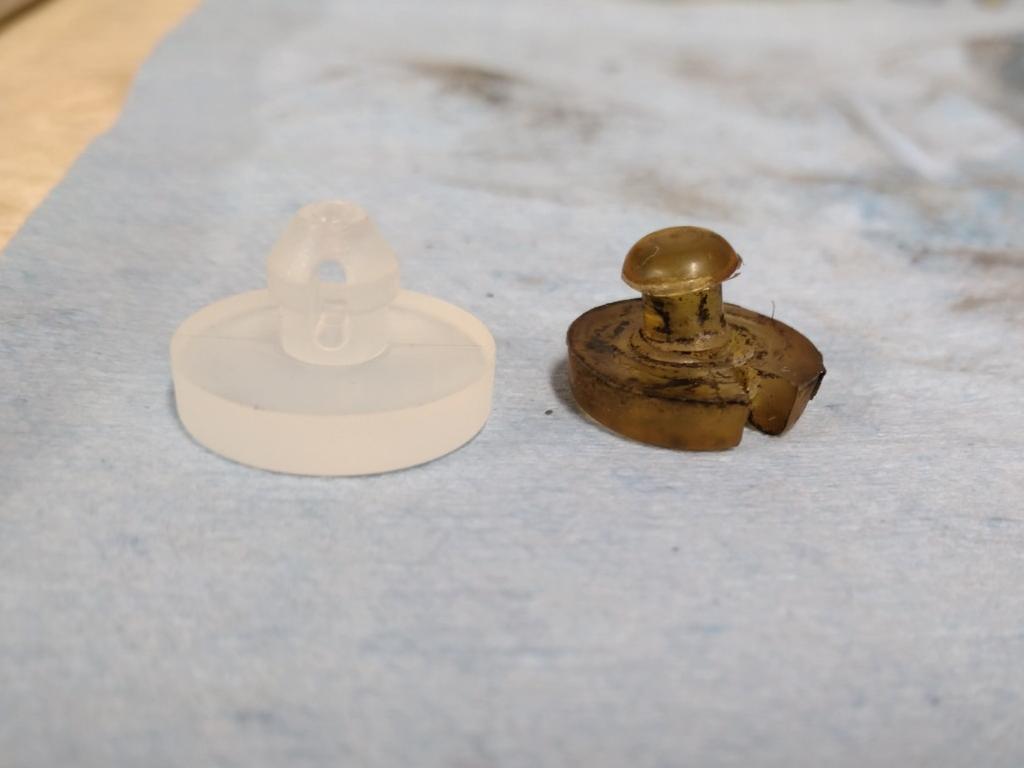 It's slightly larger than the Mitsubishi part, but it fits and works great: 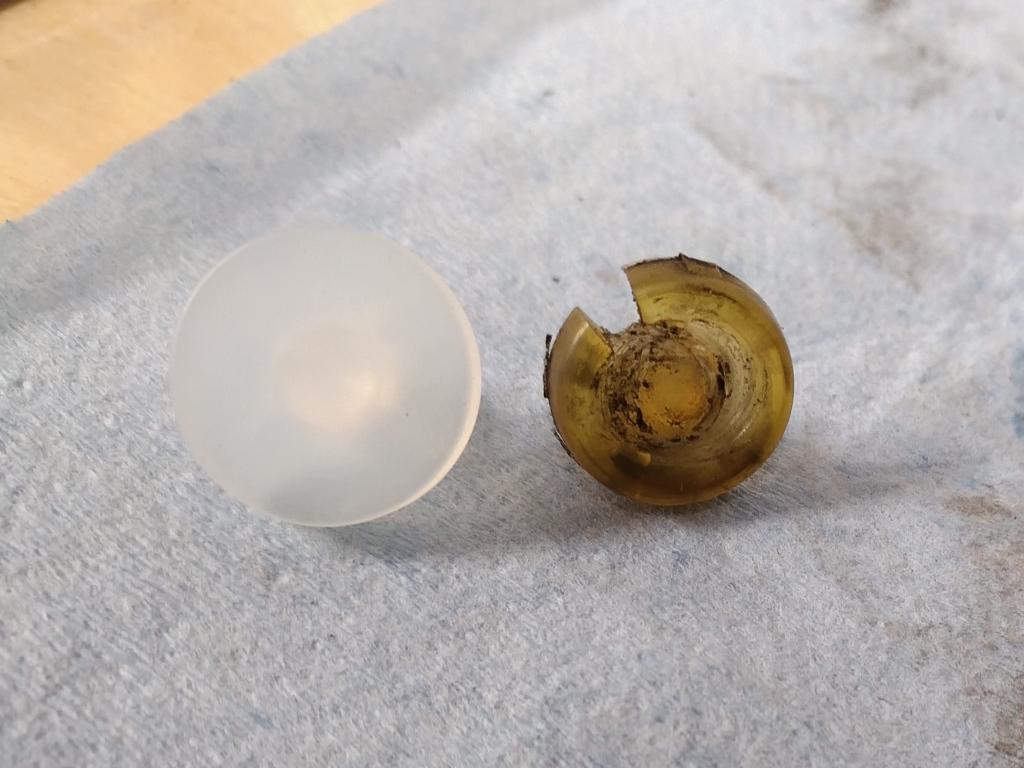 Here's my pedal assembled on the bench after I finished the rebuild. I cleaned and greased all the pivot points for the pedal and spring, but waited to grease the clevis pin until it was time to install the pedal in the car: 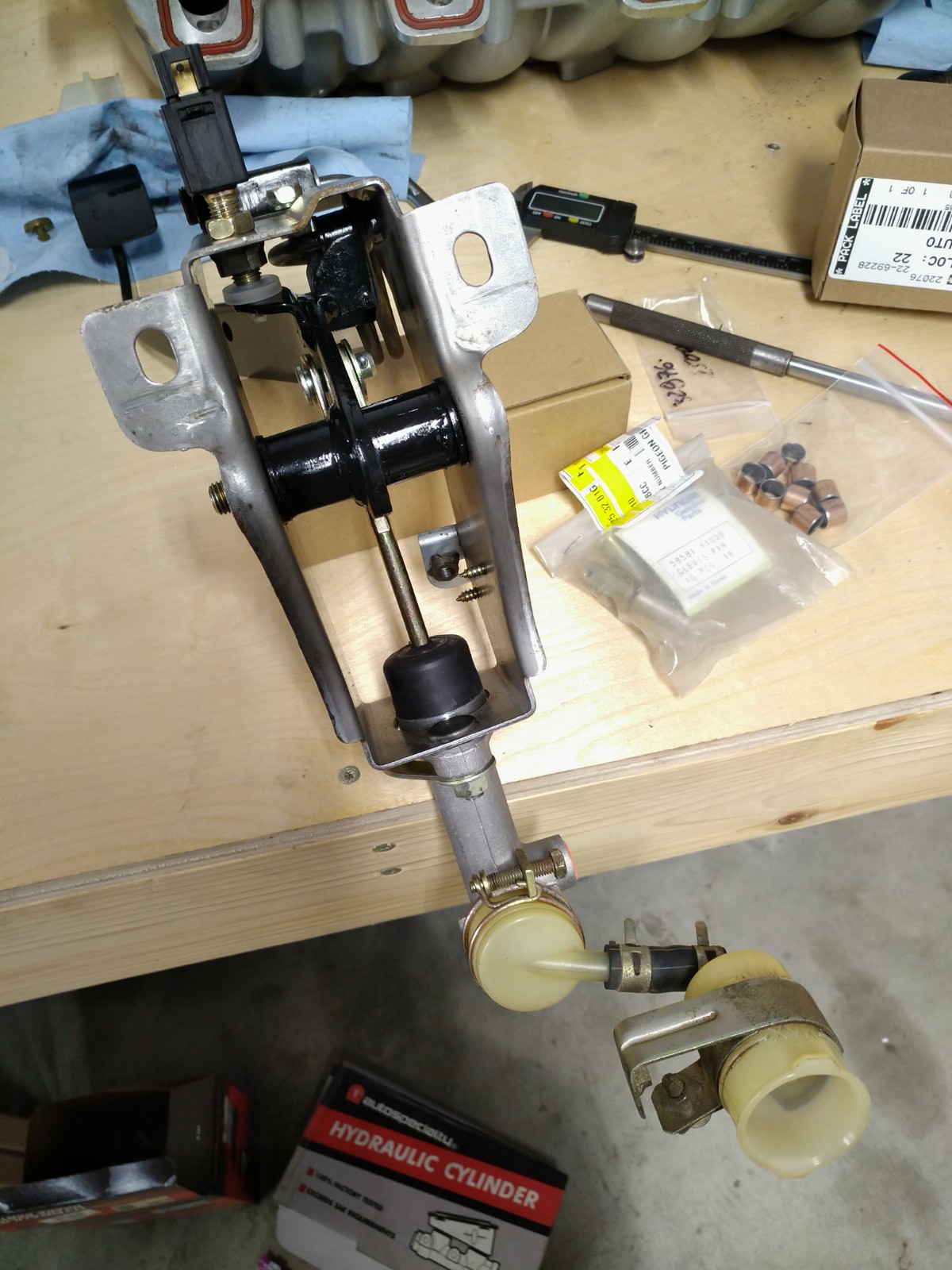 Close-up of the new parts: 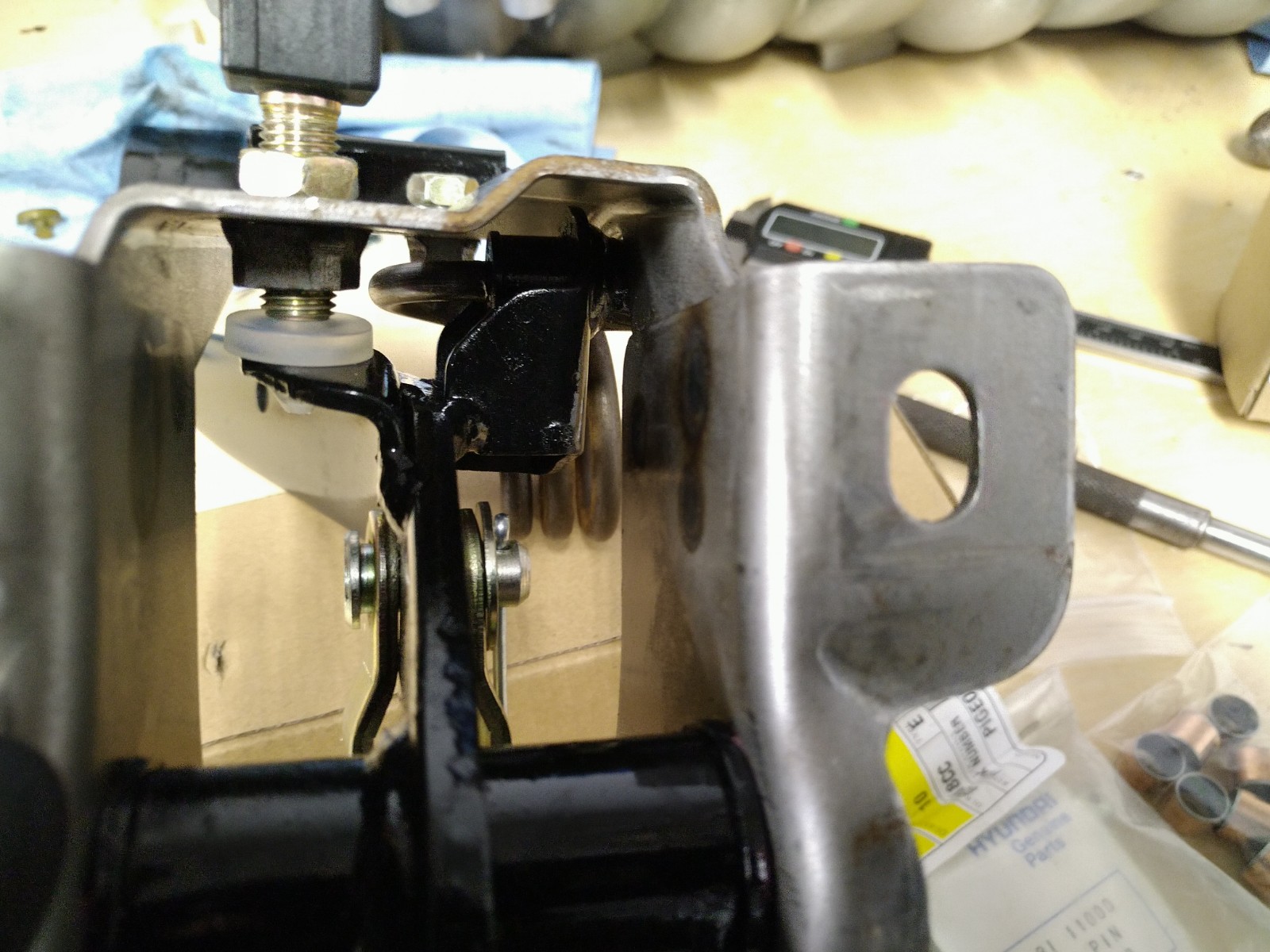 Here's a shot of all the parts in the car. Trying to bend that cotter pin is annoying, especially once everything is all greasy! I used two pairs of pliers; one to hold the eyelet of the cotter pin while I used the other to get the halves of the pin separated, then I used both pairs of pliers on the ends of the pin halves to finish bending them around: 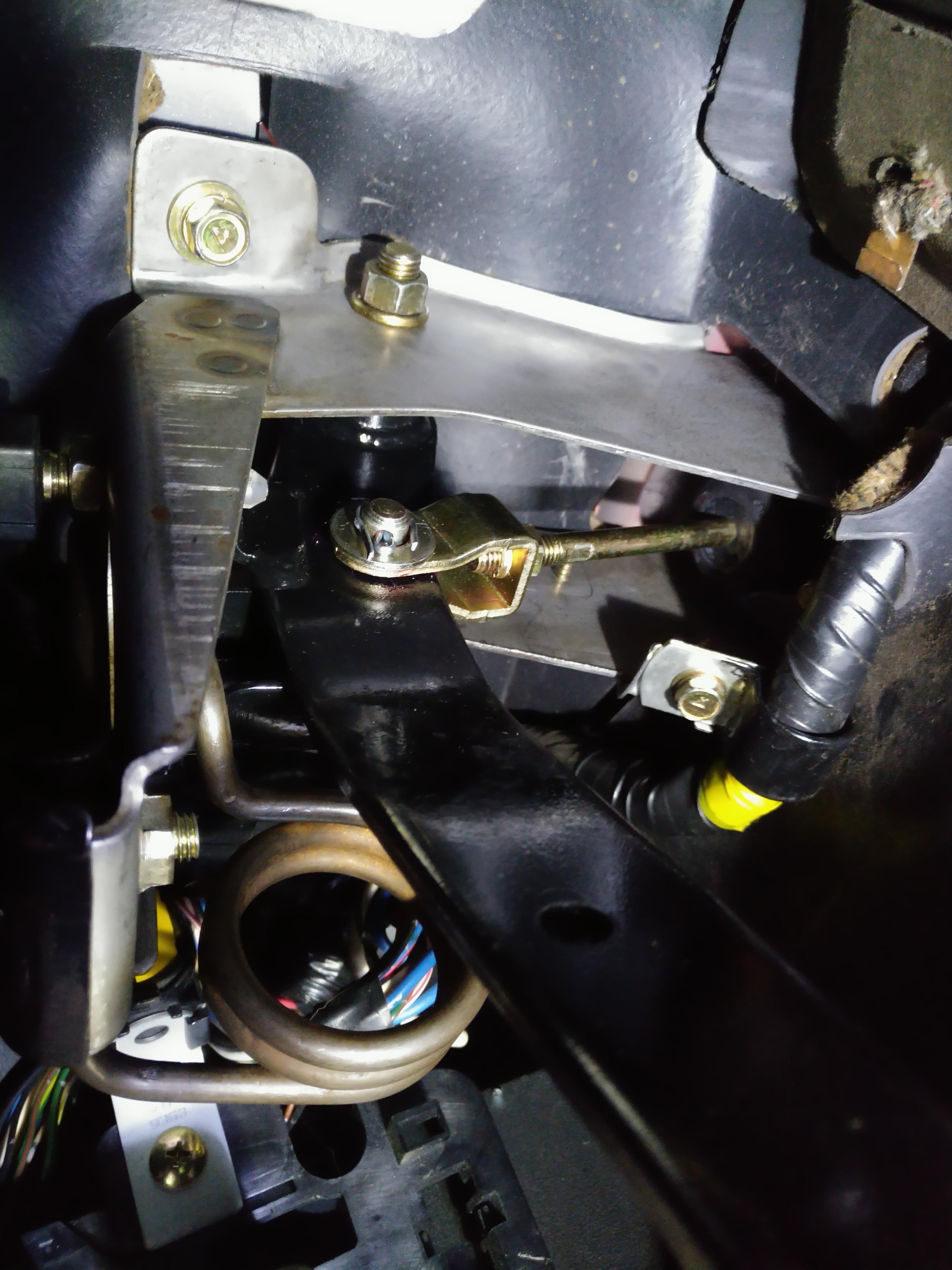 One more thing I wish I had ordered, but didn't--the foam rubber gasket that goes between the clutch master and the firewall. The Hyundai part number for this is 41651-36000 and it costs $1.22. I didn't want to wait for another parts order, so I just used a thin film of RTV instead of the gasket.

Some good info on the rebuild and part numbers

Incredible job!   Out of all of the talk about these clevis' over the years, only to find a practical perfect matched solution!  I'm blown away.  Makes me want to pull mine a part and go with this set up.

I'd love to move these two threads to the FAQ section.   Let me know if you have anything to add to them first though.

Thanks kev! A lot of this, especially the pedal rebuild, is just following in your footsteps

Let's wait until I can put a few miles on this setup--I plan to have the car back on the road this weekend. I'd also like to rotate and crop the pictures a little better. I'll send you a PM when I'm ready.

Buy the ticket, take the ride.
Back to Virtual Mechanic