The Boy in the Bright White Sports Car Build

12 replies to this topic

With some free time over the holidays, I figure it is about time I create a build thread to keep me motivated and working on the car. This will be a pretty standard restoration/build that is already underway. I will be going the cookie cutter route for most things as there's no need for originality when there are no other Starions in your country! I plan to complete the entire project for under 10,000 USD, including the car ($2700), engine and drivetrain ($4000), suspension/tires ($1300) and paint/bodywork ($2000).

I discovered starquests when I saw an ad for a blue 1985 on craigslist in 2014 and bought it. We never got Starquests in Canada, so I had never seen one on the road and, to this day, have never seen one on the road that I don't own. Here's my old 85 below, after I put an air/water intercooler on it and cranked the boost (didn't add much power tbh). 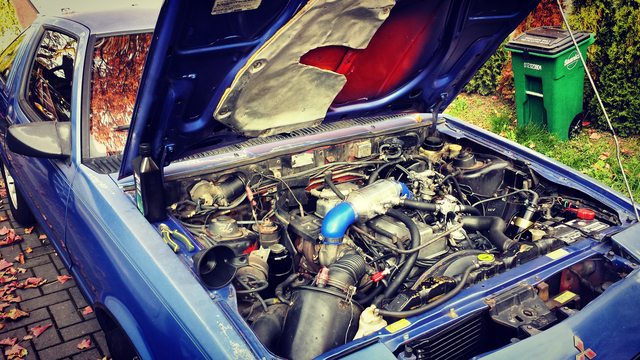 When I moved to Alberta a few years ago, that car was not able to pass an out-of-province inspection because of the amount of under body rust. So I pulled the engine, digital dash, louvers and some other parts and sold the shell. Fast forward to spring 2017, and I ended up doing a trip down to Phoenix with my gf to drive up the west coast with the intention of buying a SQ in the states and importing it to Canada. I ended up agreeing to purchase an 88 Starion from Snohomish, Washington towards the end of that trip. I bought it from Crazy Larry here on the forums (super nice guy with a bunch of cool starquests btw), and prayed that it would make the ~1000 mile journey home to Calgary. Although it had some terrifying steering play, it made the trip without skipping a beat. The guy inspecting the car at the border said "cool Supra" as I walked in. It cost about $500 to import. Here is the car when I got it: 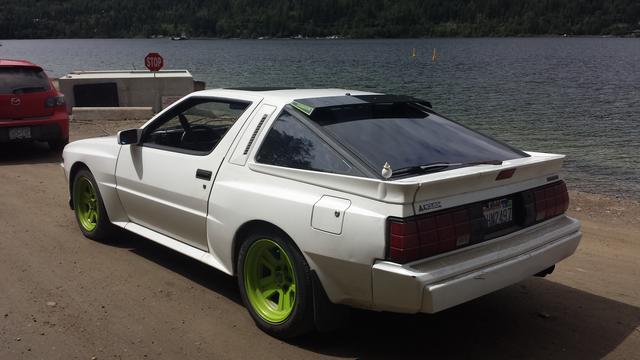 It has some pretty rare parts on it such as 83 tail lights, the rear spoiler and a mostly tan interior that I think I don't think is original. Larry called it his "drift car". It has ~150k miles and the paint is in rough shape, but it has very little rust. Passing Alberta inspection required me to: replace rear rotors, pads and right caliper, remove front window tint, replace front universal joint, rebuild the leaking steering box and high-pressure line (super fun to pull out with the engine still in), and get all the lights working properly. It passed after two tries and here is how it currently looks. I have depainted, sanded and polished the rear wheels, installed a walbro fuel pump and installed the digital dash and steering wheel from my 85 (not sure if the steering wheel will stay). I still haven't gotten the fuel gauge or dimmer working on the digi dash. The best thing about it (other than the retro awesomeness) is that I can switch it to kph from mph so i don't have to constantly convert in my head! 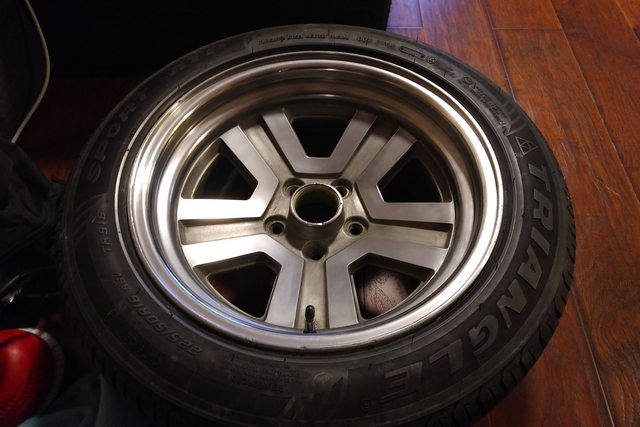 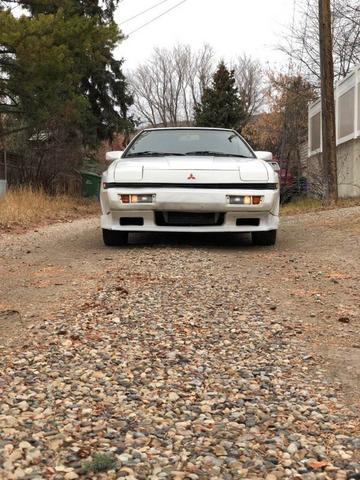 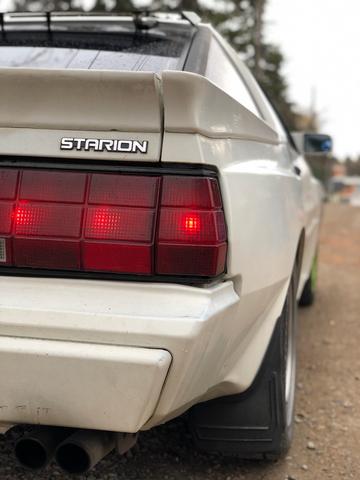 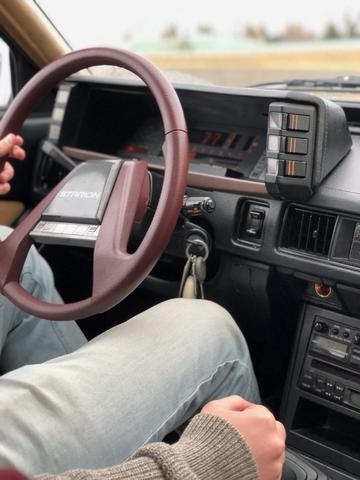 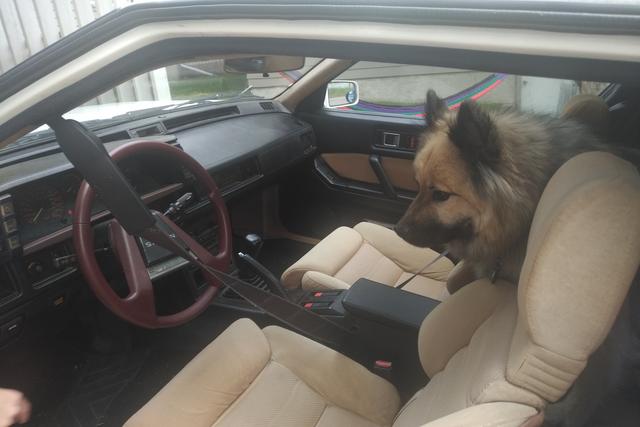 Over the course of this year I also began tearing down and rebuilding the engine from my 85. It had 160k miles when I pulled it and was running excellent. I had it checked for cracks, cleaned, bored 0.02 over and flat decked. This is my first ever engine rebuild, so I learnt as I went! I replaced all of the bearings and put in Wiseco pistons, ARP head studs and rod bolts. I'd like to make 250-325 whp with this engine. I also bought a used Holset HY35 turbo from a 2001 automatic dodge ram. I bought an adapter from the stock exhaust manifold to T3 pattern on the hy35. This is the same as the HX35 but has a smaller turbine wheel, which I figure will result in faster spooling. I also had a friend in Australia get a magna intake from a junk yard over there, although that hasn't made it to me yet. For engine management, I bought the MPI setup from a guy on the facebook group, including a Megasquirt 1 ECU with a MAP sensor, modified crank pulley, crank sensor, wiring harness and ignition coil. Unfortunately, his engine blew up due to overfueling (according to him) so the MS will need some tuning. Note the bolt that was sitting on the oil suction screen when I pulled the pan off... 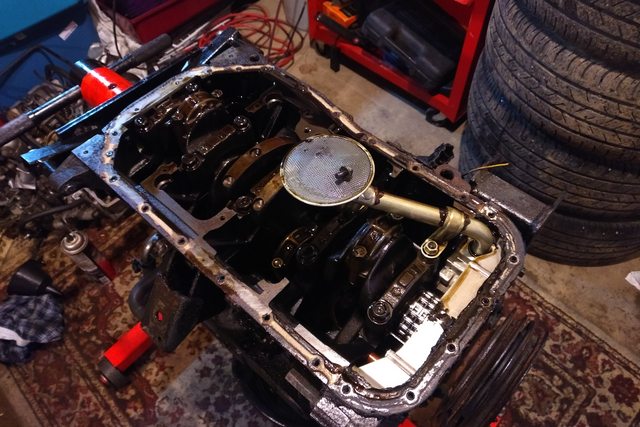 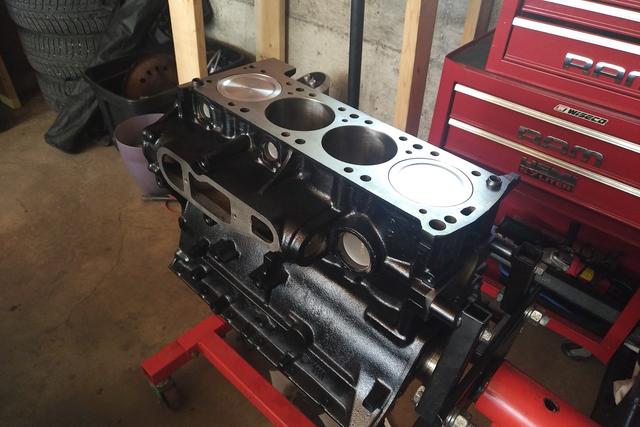 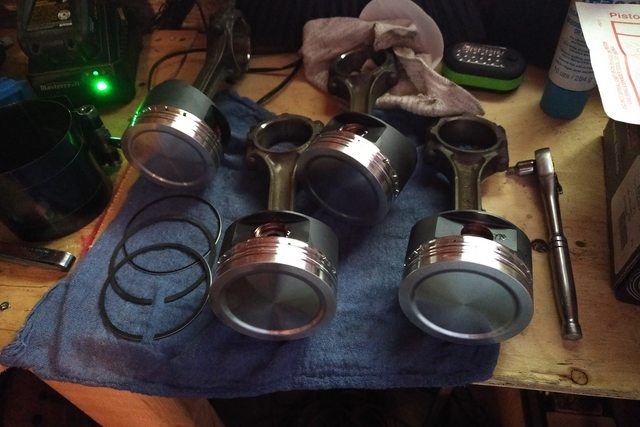 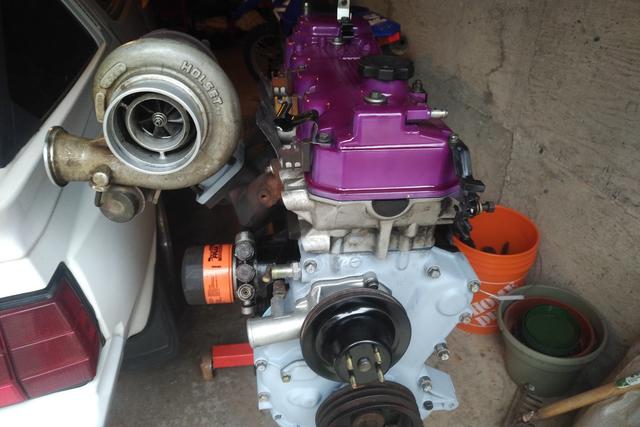 Currently the car is out in the garage with the engine unbolted and ready to pull. This afternoon I will pull out the A/C condensor, cruise control and ABS unit and throw them in the trash! Had some Sophia White spray paint made yesterday and will be cleaning and repainting the bay before the engine goes in. Also plan on ordering a tranny rebuild kit this month, so any suggestions there are welcome. Right now it doesn't like to synchronize when shifting from 3rd to 2nd. Will do my best to post monthly updates from now until June, as that is my goal for getting the car running on MPI.

Looking good!  I would take that condenser if you werent so far away.

cool, you bought one of Crazy Larry's cars.....  he drove that to one of our recent PNW meets.... nice to see it found a good home!

Good to see another stay in the game & carry on the starquest luv. Cool how rare SQ are up that way. Nice project
Years ago I put away a 2.0 sohc, digital/anlog combo dash, and seats exactly like those, I pulled from an early non-us starion
By far my favourite items of all starquests (they will all soon end up in a AE86 Levin hatch)

Nice!  I remember Brett drove that to a meet I had at the house when we lived in Bellingham, at least I remember the green wheels.  A motor doesn't blow up from overfueling BTW, given the bolt on the oil pickup screen I think it had other issues.  I'm sure you'll have more success.

You are going to need the fuel sender from a car with the Technica package. NLA from Mitsu.

the dude in the honda said, i thought you said your car was slow, my response was.. well you said yours was fast so i guess we both lied.. haha

What's going on with the oil filter block adapter?  It looks like it's been extended off the block a few inches for easier access?

Scott, I would love for you to take a look at the tune before I run it if you're interested. His reasoning was that too much fuel got past the rings and into the oil, causing a spun bearing....

Creaky, I do have the fuel sender installed, but I think I need to run an extra wire from the rear of the car to the cluster. Luckily I am good at making s*** up when it comes to wiring.

Moto, I haven't done anything to the oil filter adapter. Maybe there is a difference between the flatty and fatty blocks there? I'll have to compare when I pull this block out.

Nice to keep it going and giving it some love!

Progress has been slow for the last two months. We had one of our coldest Februarys ever this year. Averaged -19C and were only above freezing for one hour in the month

so the garage was too cold to work. I did send my flywheel to be surfaced and bought an XTD clutch as well. I asked the shop to lighten the flywheel but was quoted 350 bucks so said naahh. Today I got in the garage and taped half of the engine bay for painting and also spent an hour scrubbing down the transmission with degreaser. I was planning on rebuilding the transmission since it doesn't synchronize when shifting from 3 to 2, but after looking at prices and the amount of work required I decided I can live with the inconvenience. 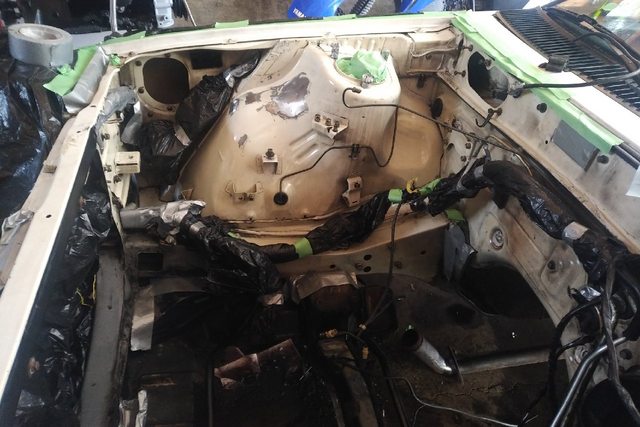 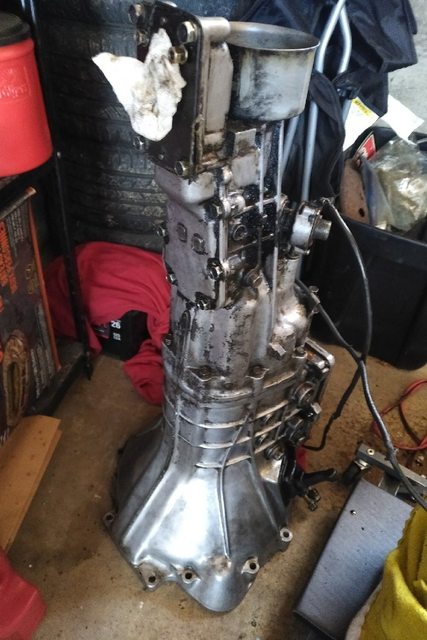 It will run....one day....
Back to Restoration Center

Also tagged with one or more of these keywords: Starion, 88, MPI, build, digital, megasquirt, holset, magna