25 replies to this topic

I am a Mitsubishi Collector and Builder in training so I have a few cars...

Here is one I recently acquired.


Little bit of back story: The car was originally build by a guy named Don, widely known in the 3000GT world as "GTWizard" It currently holds the 3.0L NA Power record world wide, while its not much, it made a solid 240whp on a mustang dyno with room to spare - Currently it's probably closer to 260whp. Its builder and owner sadly passed away earlier this year in march, His son put the car up forsale finally in august, and as a huge NA Power Engine fanatic for really anything - I jumped on it. I had been itching to build a NA 6G72, as they are accidentally great NA motors. and one of my previous 3000GT's still holds the Stock Cam and or Stock Header record...if you can really call it a record....  I put a deposit on the car almost instantly, and bought a plane ticket to Texas, picked the car up, and drive it 18 hours home to Wisconsin.

The car is very light weight (for a 3000GT) coming in at 2896lbs (3080 with me in it, sitting on the scale. At 240whp, and just barely under 2900lbs, that means it makes more power and weighs less then a fully loaded NSX. It still has Power windows, Locks. Heated Mirrors, etc.

There is still alot of weight to be shaved off the car, as the sheet metal, body, glass, etc is all 100% factory. I'm hoping to get the car down to 2600lbs comfortably.

Also some sweet Yellow HID's retrofitted to the stock foglights.

Some pictures of how I got it. Mainly Most of what I've done with the car since I bought it is just cleaning some of the mess up, making it more bearable for non track use.

Car had been sitting for months, ontop of never really getting washed to begin with, so that was one of the first things I did with it.

Stripped the interior for cleaning, also removed all unwanted/unneeded weight

The Body, Chassis, and Engine wiring harness was really hacked up - mainly to shave weight, which is fine, but it wasn't done very well. I blew several fuses from poorly protected snipped wires that would ground out on other wires or the chassis... Luckily I had a entire wiring harness from a 1992 3000GT SL so I pulled it all out and replaced it.

I wanted to make this still midly street car - the Interior doesn't really add much weight, so I replaced alot of it. I'm going for more of a track ready type super car theme. Some practicality, but sensible about weight.

I had a good amount of spare interior pieces so I added most of it back to the car, the Momo Steering wheel I bought 2nd Hand off ebay, I wanted something a little more classic Momo, but was still period correct for the car, happened to find that one at a decent price and jumped on it. I love it.

The body/Chassis is extremely clean as you can see here

Added my own personal touch to the engine bay, also cleaned up alot of the mess, new battery with tie down I made all my own cables, etc.

The Distribution block I built

Close of up wiring harness

When I got the car, the Fuel pump power wire was just hanging loose in the cabin, wire nutted together right in the middle, and was 3 or 4 various sizes of wire in total all spliced together. I couldn't have that. So I ran one solid run of cable from the relay to the battery, with loom, secured it properly, and called it a day.

It looks like a great project car man, keep at it!  Also its good to see another member from Wisconsin. A Wisconsin member meet is even more in the cards now lol.

Nice man! Always liked those. My wife loves them. They seem a bit pricey to build but Ive mostly barely poked at the idea of building one.

They seem to be right in the middle of DSM and Supra, haha.

They are tricky to build properly if you are a newbie, but guys who have been around for along time don't struggle at all. Several in the 4 Digit power range... Me personally I like just basic mods, with Good suspension, Tires, and Brakes.

Always liked that body style, my wife used to want one when they were out. Never knew people built the NA ones though. Seen a couple with swaps like an LS and a 2JZ that go me thinking though.

Haha, I get alot of comments on that, I didn't put it there. The original builder did. He was a old timey guy, so he did alot of old timey guy things... Like home made relays out of old Altoids Boxes.

It does go down, all the way around and has a formed piped that fits snugly around one of the openings in the front bumper that are designed to flow air into on the Twin Turbos for the Intercoolers. I plan to connect it so its a true ram air style intake setup.. I have it in the works to put remake the entire intake setup out of Carbon Fiber with the exception of the intake manifold, though that would be pretty awesome too...

This season was just kinda clean the car up, and enjoy it - Next year is when all the serious stuff starts and I put more money into it then it will ever be worth. The car will eventually go 4.1L Stroker, with Titanium rods, and individual throttle bodies, That's the end goal and would like to see 400-475hp out of it...Fairly dooable on race gas, unsure on pump gas. There are 2.5L NA V6's from the mid 90's that make that kind of power, so hopefully I could do it with almost double the displacement.

Car will also get a AWD Conversion, with a dog box trans, and sequential shifter.

Awesome cars, my buddy in high school had a pearl white Stelath R/T TT. I got respect for the 3S guys, those cars look like a bear to mess with!

They are pretty fun, very rewarding - I love owning them.

I'd just say watch out with the ram air tube mounted with a low inlet and sealed to the intake pipe, it's a good way to hydro lock your motor on a rainy day (if you drive it in the rain). Lots of Vette guys have done that with low mounted ram air setups like the Vara-ram. Having it just exiting in front of the intake filter should do the trick with the turbo car and the water will have somewhere to go if you hit a big puddle..

This particular car will stay NA forever, and it will rarely see rain... It's mostly reserved for track use, and sunny warm days..

it is something I considered though, so I will have a spot where I can divide the intake for working on the car, and if i happen to get stuck at a wet track day.

So the car was having various issues, struggled to idle, struggled to idle consistently, low load throttle was very hesitant, it also was pushing coolant under WOT... I performed a Compression test and averaged 155 across the board...which is fair, but on the low side, no indication of a fully blown head gasket - pulled the heads anyways.

I noticed this corner of the head felt very undertorqued when i broke the head bolts loose, but it may have been a result of head-bolt stretch. I forgot to check the head bolts for stretch.

Closer examination of the heads I also noticed the Cam Gears slipped BIG TIME, which is a common problem with that brand of Cam Gears, Good thing I have some brand new BC Cam Gears to replace them.

So I dropped the heads off at the machine shop last week. Good news and bad news.

Bad news, the machinist that did the heads did a very sloppy job, The valve seats were done poorly and the valves were not sealing so my machinist pointed out to me where they were leaking at on each valve and each seat.

The aftermarket valves in these heads also have no branding, and appear to be very soft, I have heavy wear on every valve stem from the rockers. Per his recommendation we are throwing them away.

He recommended me going with Supertech 2mm Oversized Iconel Exhaust Valves and 1mm Nitrated Intake Valves, since he would re-cut the seats anyways, and wouldn't charge me extra for the labor.

Unfortunately, the 2mm oversized Iconel valves are discontinued, Chris hill has them on his site but does not have them either.

So we went with just +1mm Iconel and +1mm Nitrate.

Who ever decked the heads also did a poor job, and was not helping my situation. He looked a little shocked when i told him the car wasn't running MLS gaskets.

SO Good news is, I'll have some much more suitable heads for the abuse, and the car should recover some lost power, and compression between every valve leaking, and the heads being decked again which will bring up compression. I also had him pressure test the heads, and they came back fine.

ALSO, he was very intrigued about our ARP Head Stud VS Mitsubishi Head Bolts ordeal.

Got the heads back today, They look fantastic! I like that the valves actually sit inside the head now instead of slightly protruding like they did before due to the crap valve job.

Old valves are forsale, 1mm Oversize, I believe they are 3SX.

I assembled and installed the heads.

Several things that were contributing to multiple issues I was having

*6 Collapsed lifters
*All Valve seats were poor and Valves were leaking compression
*All 4 Cam gears slipped, which I did not realize until today when I went to reference them. This probably was a huge part my problems especially idle
*The Transmission side head bolts seemed under-torqued

I've had this 3SX Intake Bracket for years, I bought it a long time ago and it didn't work on my Intake I had at the time on one of my old cars, so it just collected dust. 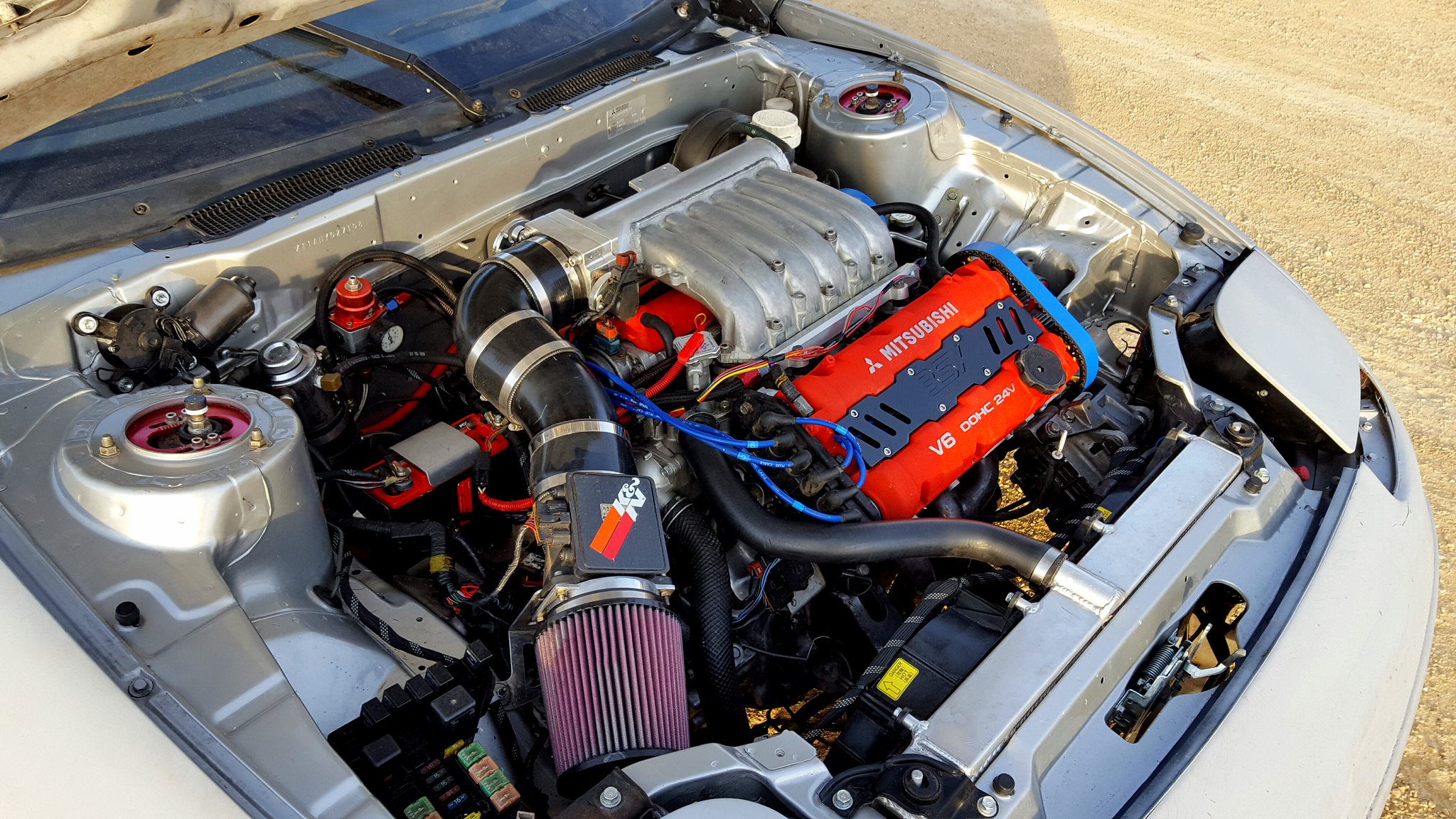 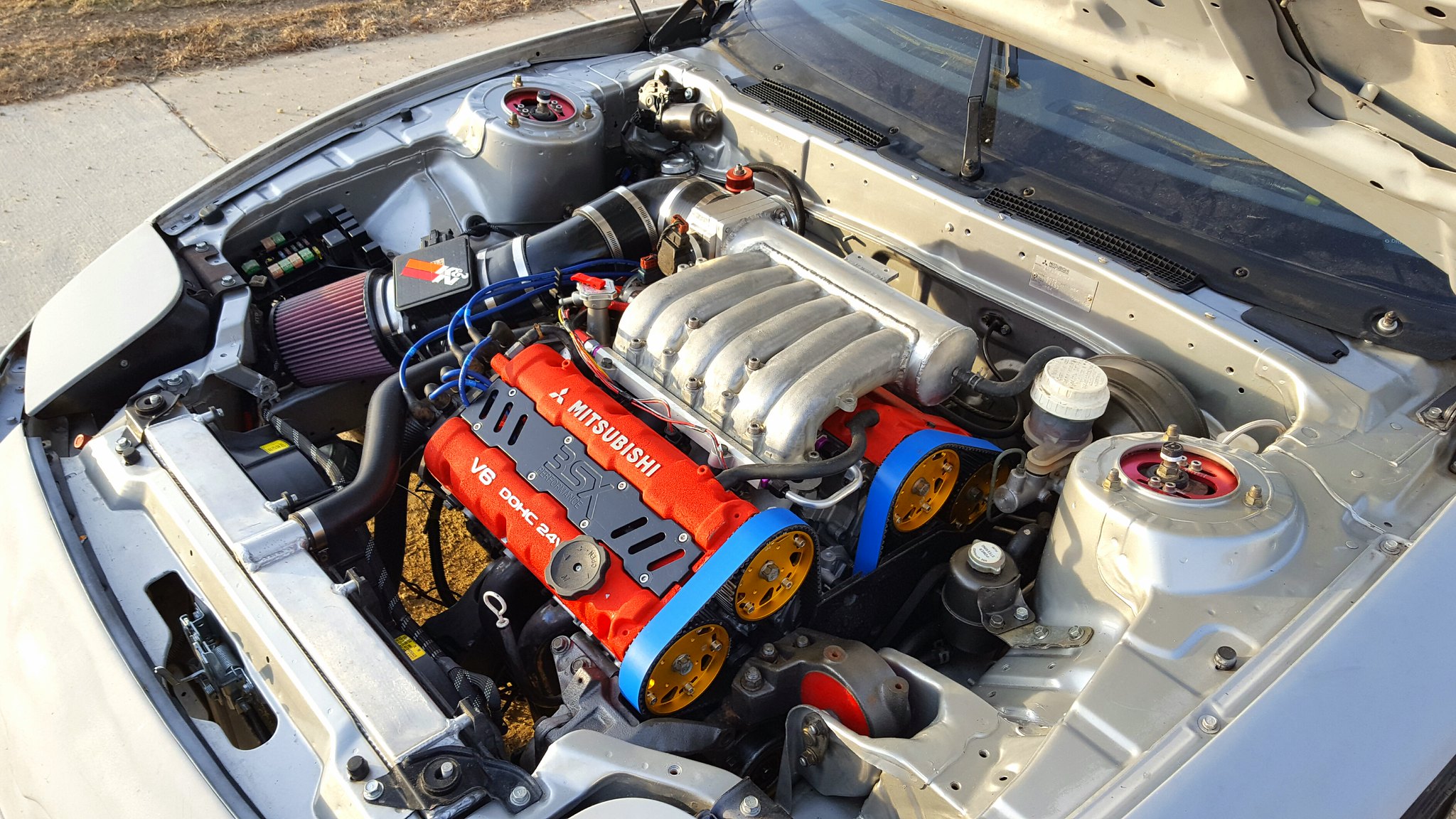 Thanks, a few things left to finish up on the car, and hopefully can start re-tuning it.

I am going to scrap the tune and start from scratch, I remember it was pretty lean at WOT between 6500-8200 like 12:1ish, which is pretty bad for Pump gas.

It had the CEL Setup so it would illuminate at a knucksum of 5 or greater, and there was only 1 or two times it lit up, but I think the damage was done long before then, and the squishy head gaskets weren't helping... As much as I want maximum power, I need this car to last as well.

That looks awesome.  Ive always loved these cars, just never got around to buying one.

Very Very nice. I never got in to them because of things I "heard" about them. I stuck to my NIssan 300zx twin turbos. I might need to start checking these out! Looks great.

Added my own personal touch to the engine bay, also cleaned up alot of the mess, new battery with tie down I made all my own cables, etc.

Where did you source this looming from??  I'm working on rewiring my car and am currently trying to decide which route I want to go for looming.  It looks really good!