37 replies to this topic

Last Saturday I was able to get the new intercooler installed. Man what a difference a good core makes. My BAT drops even faster now and I am not seeing them creep upwards as I was with the CX core. Here's some pics 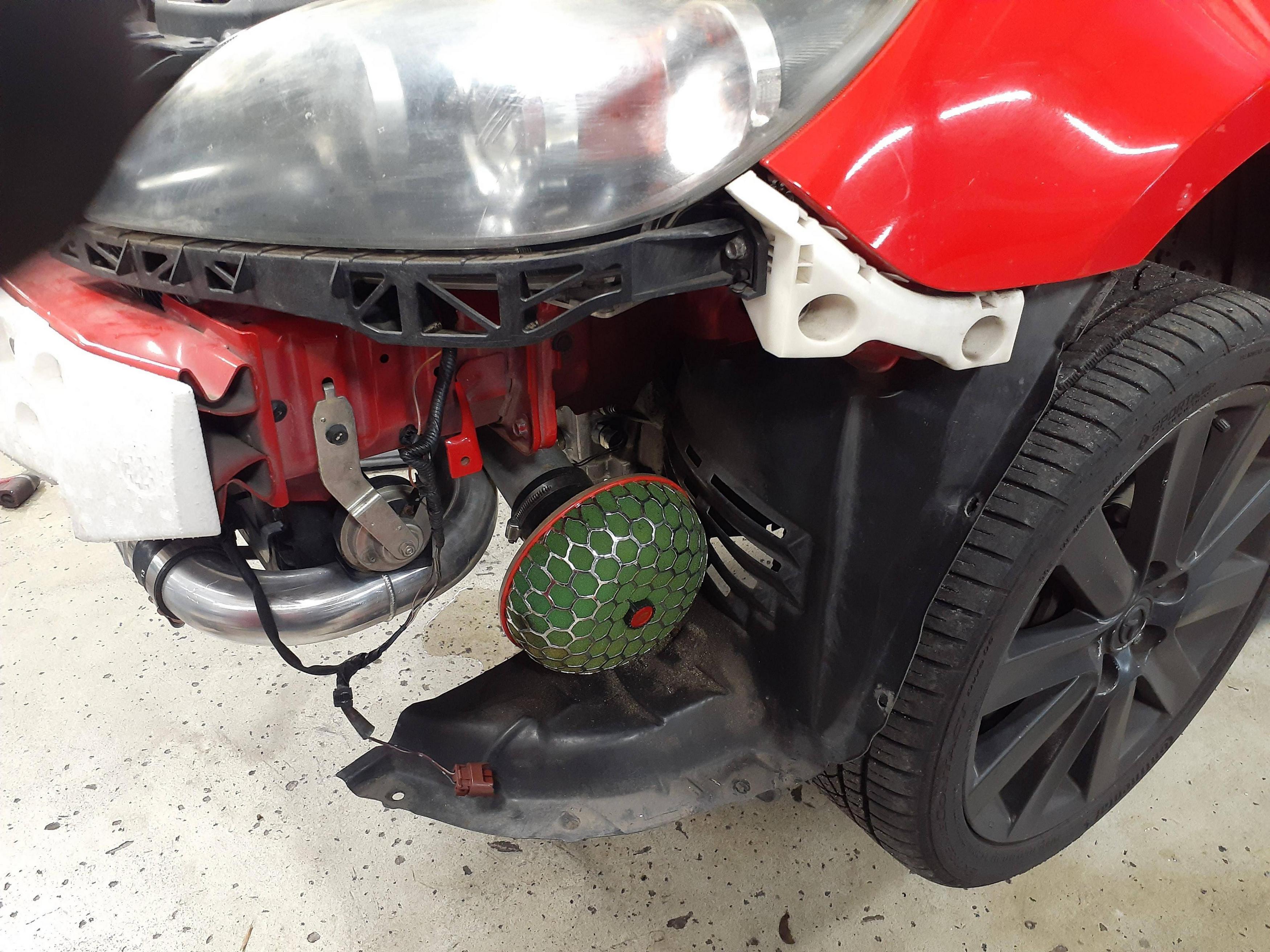 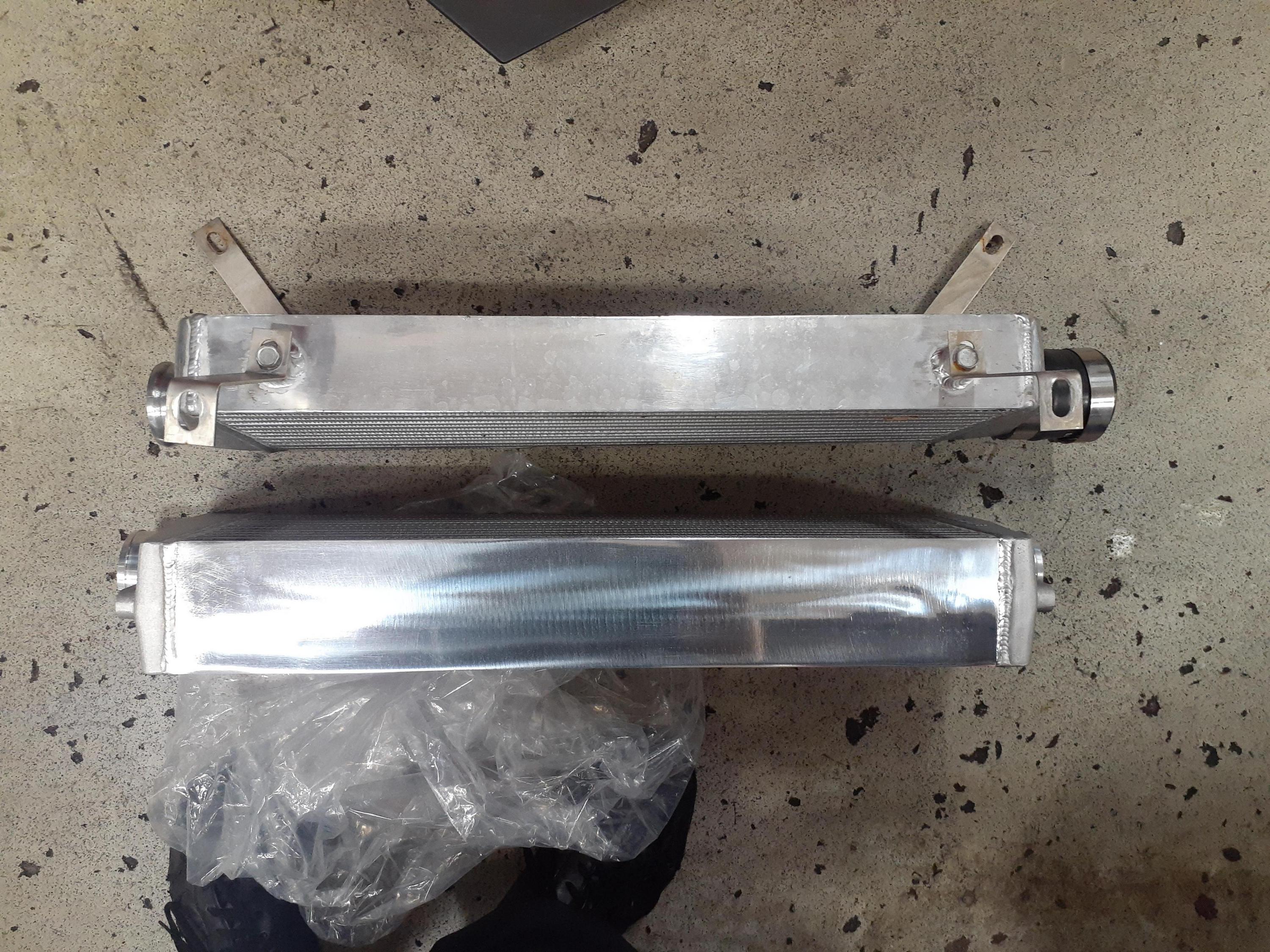 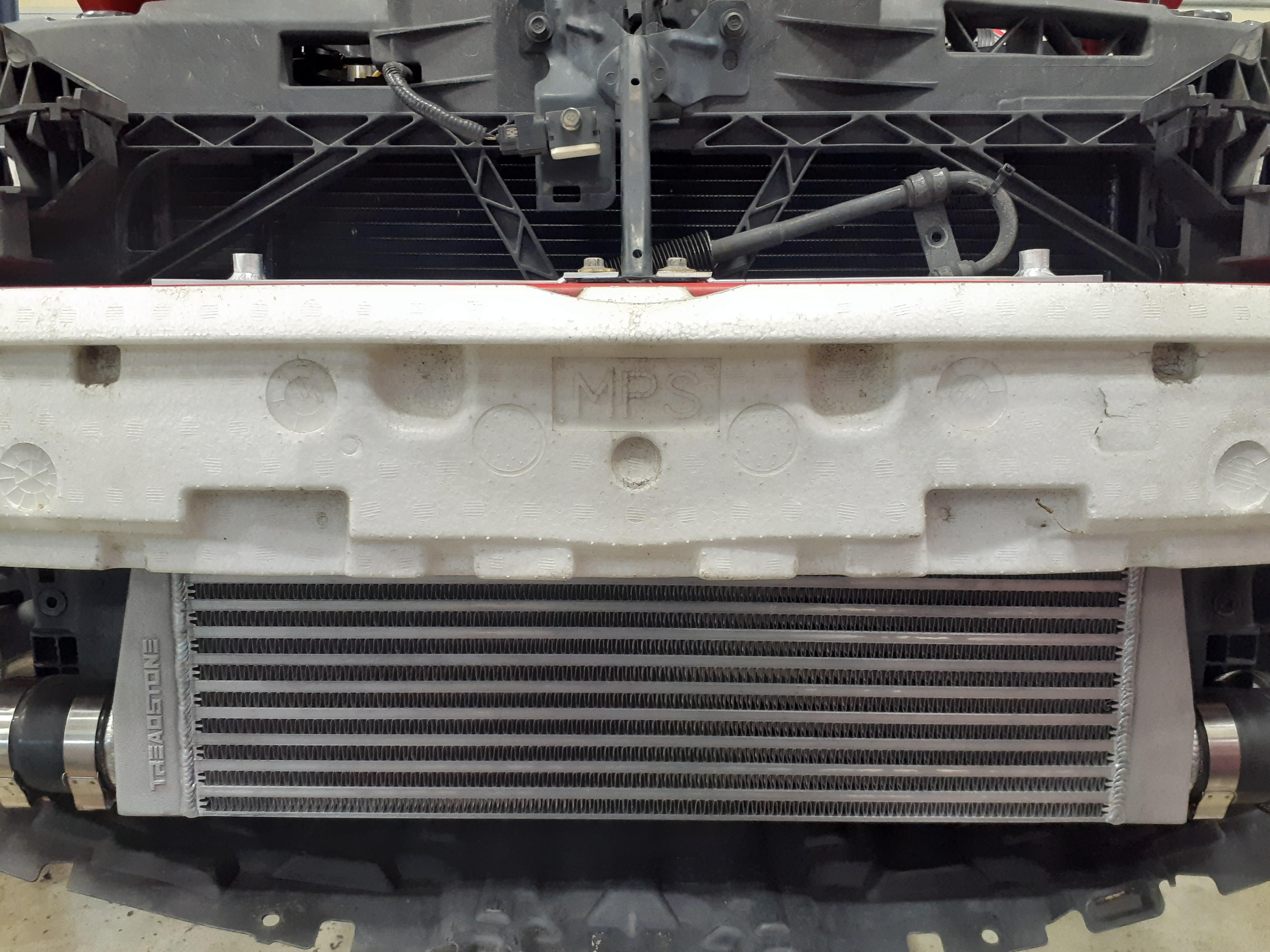 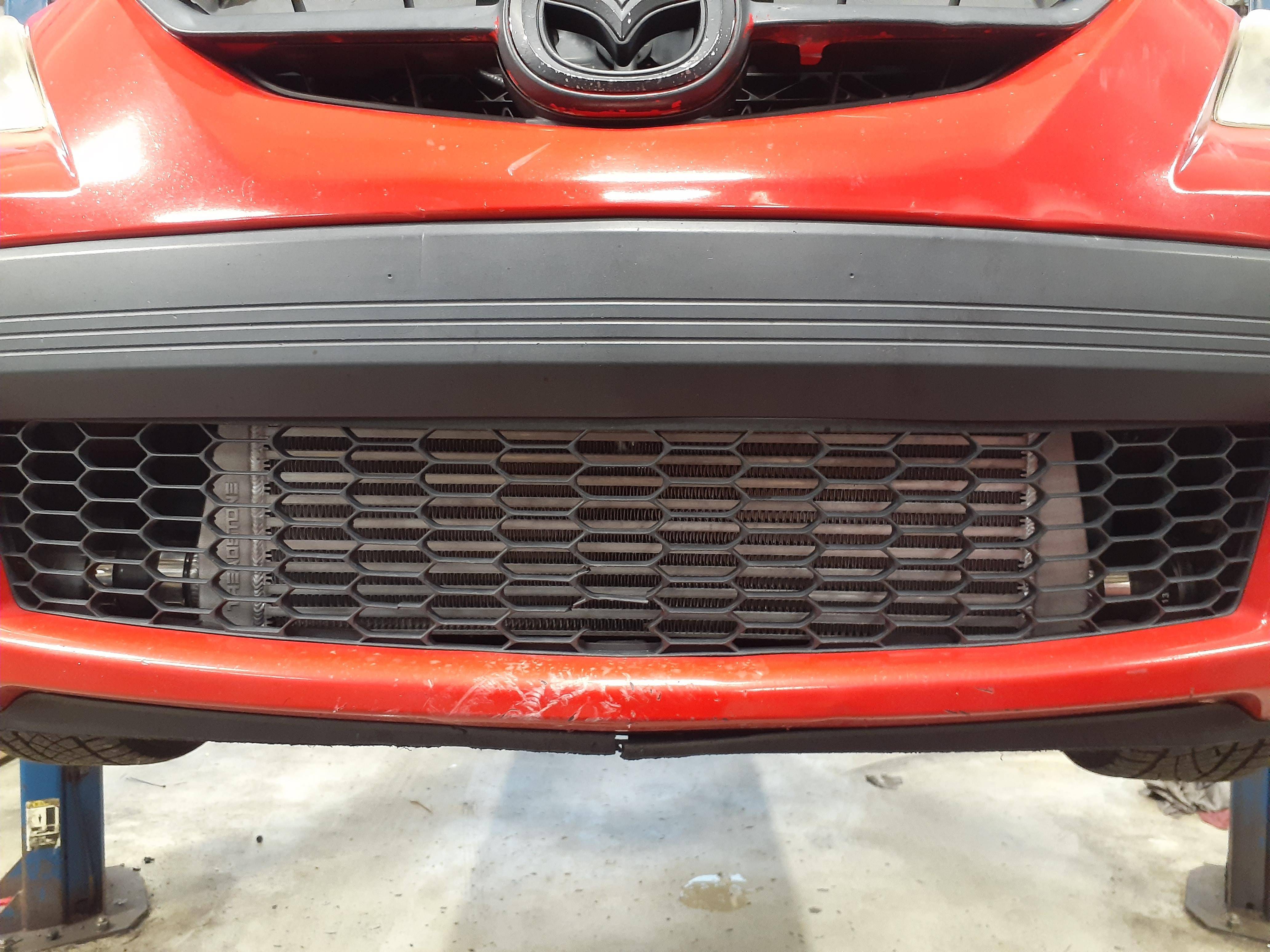 I ordered some wheel spacers to change the center bore down so I can mount STI wheels from my friends Subaru. They are a half inch wider and look much better than my current wheels.

I also just got all the stuff to do my VVT Timing chain replacement on this car. Last thing left to do before I get back to the Miata is getting a front lip to cover the damage done by the metal I hit.

New update. Yesterday I was finally able to install my "new" wheels. They are Subaru STI wheels (made by Enkei) 18x8.5 55mm offset 56.1 CB. Our center bore is 67.1 so I had to use a 15mm wheel spacer to adapt the hub down. I always use hubcentric spacers as to reduce vibration and to ensure proper mounting.

Clearance is good. I am running 225/40ZR18 tires and while the sidewall was flush with the edge of the Gen 1 wheels, they are more rounded/stretched on the STI. Nothing crazy but I am sure I can fit a 245/40 tire in the wheel well but will probably have to roll the fenders if I go that route. 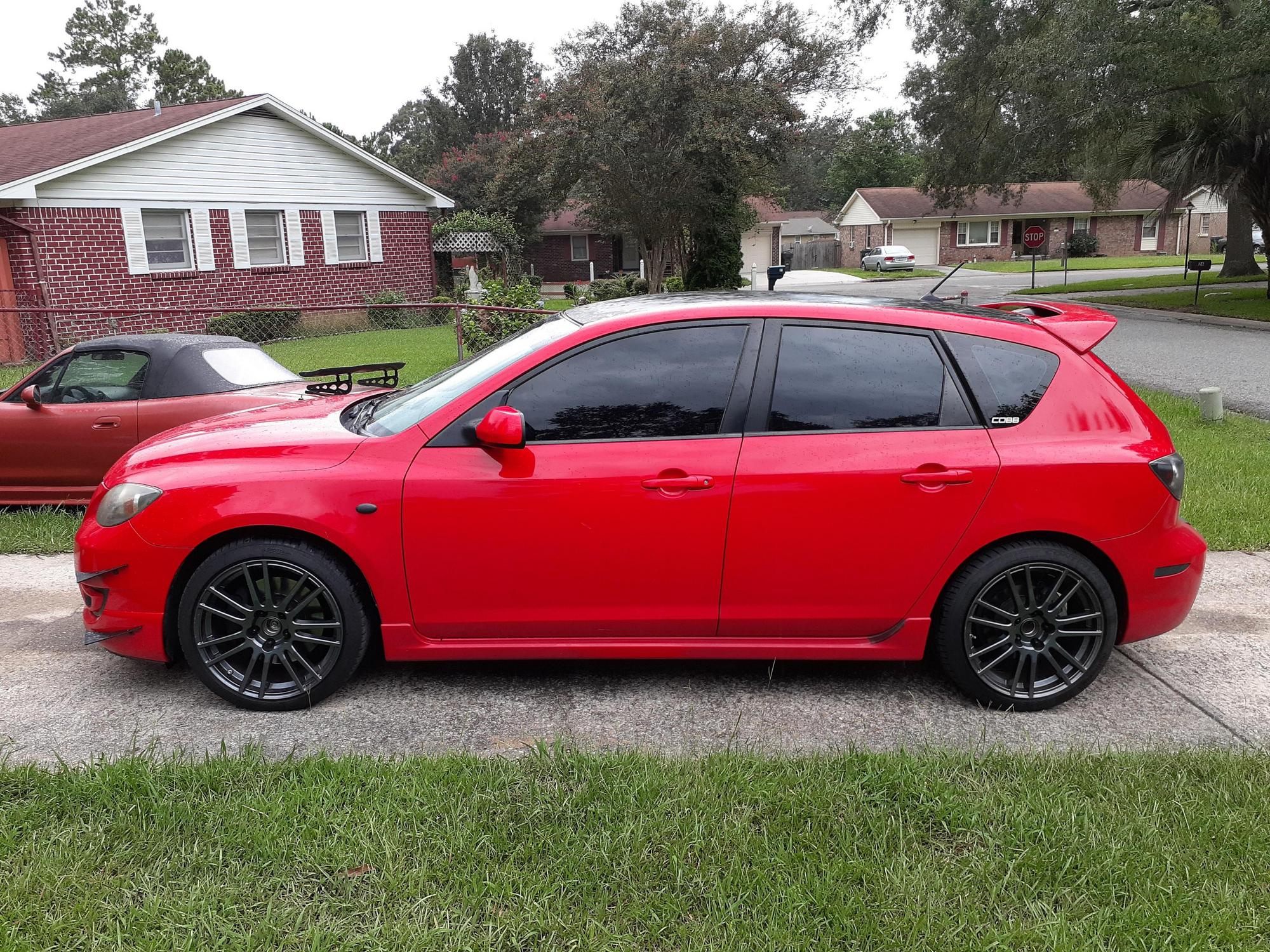 Man that thing has really come around! Congrats dude.

Man, I never would've thought of STI wheels on a Speed3 but they look awesome. Did you have to shave down the factory lug studs at all to work with the 15mm spacers?

Man, I never would've thought of STI wheels on a Speed3 but they look awesome. Did you have to shave down the factory lug studs at all to work with the 15mm spacers?

I didnt have to shave the studs down at all thankfully. The STI wheels had areas near the studs which allowed the stock studs to clear.

Thanks for the feedback too. I have a front lip for the car on the way and will be doing my timing chain soon so I will get some updates soon.

Looks great!   I love the mazdaspeed cars.  Great deal on picking this one up and bringing it back to life.  What a price!

.   Definitely avoid the mazdaspeed intakes that put the air filter down near the LH front wheel well.  I mean these cars absolutely need an aftermarket or updated intake pipe but stay with one that keeps it higher in the engine bay.   I'd probably still have that car if it weren't for that darn intake pipe.  Still ticks me off and its been over 10 years.  Almost didn't buy the car due to the intake pipe (from dealer used with 20K). Didn't want a car that was modified at the time but the dealer talked me into it because it was a true mazdaspeed accessory.

Thanks! The wing is factory for those. I prefer the 2010-2013 wings but the hatch is slightly different so I'm not sure it would work on mine.

Looks great!   I love the mazdaspeed cars.  Great deal on picking this one up and bringing it back to life.  What a price!

.   Definitely avoid the mazdaspeed intakes that put the air filter down near the LH front wheel well.  I mean these cars absolutely need an aftermarket or updated intake pipe but stay with one that keeps it higher in the engine bay.   I'd probably still have that car if it weren't for that darn intake pipe.  Still ticks me off and its been over 10 years.  Almost didn't buy the car due to the intake pipe (from dealer used with 20K). Didn't want a car that was modified at the time but the dealer talked me into it because it was a true mazdaspeed accessory.

I had debated moving it higher into the engine bay but haven't had any issues at all. I generally avoid flooded areas and Charleston is bad for that. I do see some pretty good IAT numbers with it down there. It is blocked by the front bumper and splash shield.

My front lip was delivered today. It needs paint and to sit in the sun to flex back to normal. I also really need to get this VVT/Timing chain done soon but work has been too hectic. Last week I worked on 35-40 cars and turned about 83 flat rate hours. Week before that I did over 40 cars and hit around 110 flat rate hours. The pay is great but it just doesnt stop or slow down.

Thanks to all of you for following my progress. I actually update this build thread more than I do on the Mazsaspeed forums lol.

Oh I see the filter in one of your pics above. Thats exactly where mine was.  Water splashes in through the Louvered are in the plastic wheel well, as does snow and salt.  After the first winter, I noticed salt in the intake pipe past the filter!   It didnt take much to flood the car, was driving home from work and a thunderstorm went thru.  I felt the car cutting out/bogging while driving in the rain. Enough so that it fully shut down.  I was in a low area and the road didnt actually flood until after the engine cut out.  I was a sitting duck.  Water just breached the passenger door, enough to smell musty after a few days.   Engine was hydro locked and they were just going to replace it with a factory rebuilt, but when the insurance adjuster smelled the musty odor in the interior he declared it totaled.  Was a $20k car at the time and the engine was only $7k.  Still bugs the hell out of me, that happened in the summer of 2009.

Id definitely consider going with a higher mounted filter despite a loss in HP.  I wasnt the only one to have the issue I had. I remember reading about others on the mazdaspeed forums back then

It's rained pretty bad the last week and I have been lucky so far. I am going to move the filter higher or may just by one of those AEM bypass filters for higher up in the system.

Today I replaced the timing chain and VVT actuator. I had bought special tools for it but ended up not using them because they didnt fit right. At least the camshaft plate didn't work but the crank holding pin did.

I'm real glad I replaced that stuff because it turns out the chain had been hitting the valve cover and grinding it away. Here's a few pictures. I didnt get too many pics as I was concentrated on getting the job done quickly but it still took me about 5 to 6 hours total due to never having done timing chains on this engine before. Better to be slow and double check everything.

The car runs well but the plastic arm on my intake runner control arm broke off so it is throwing a P2006 code for VTCS solenoid stuck closed. I'll have to move the sensor a little to make it contact. 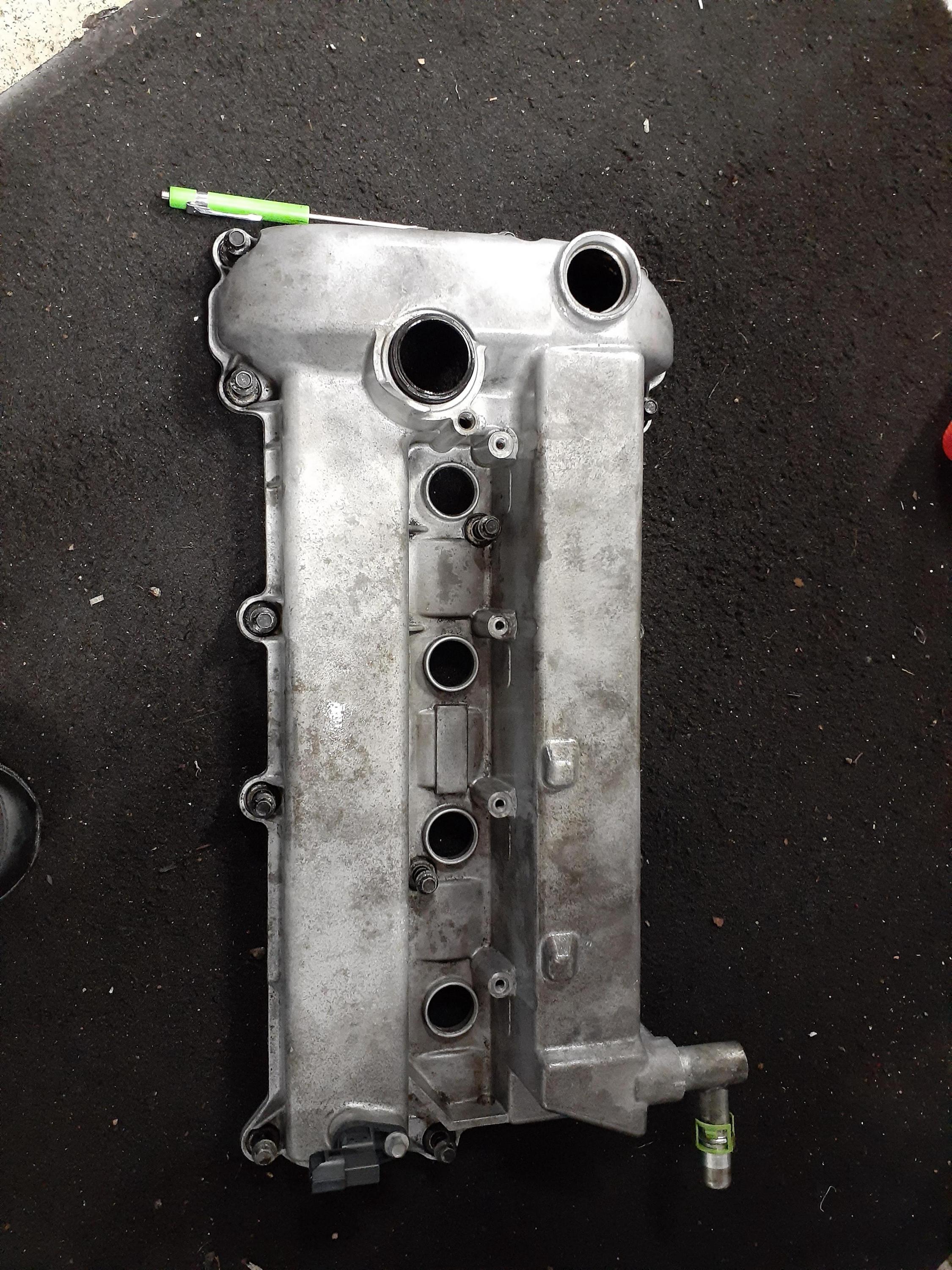 View of the timing chain damage 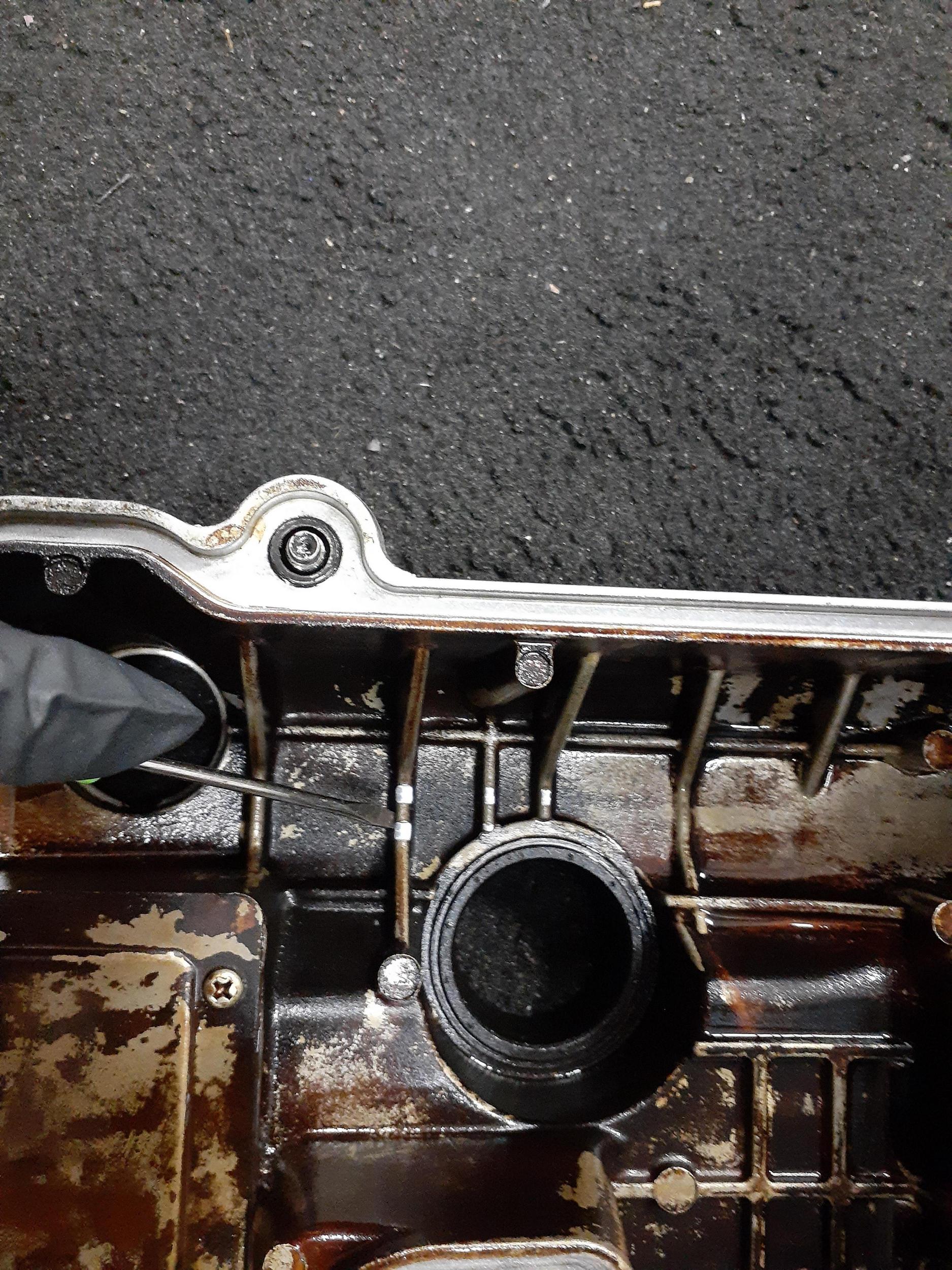 New update for October. Been working on a few things for this. I grabbed an extra intake manifold to remove the VTCS plates and port/polish. I bought an oil filter conversion kit, front lip,  skid plate, and a proper EGR delete kit. I also got a bumper fix kit because they corners near the headlamps dont stay pushed into the plastic retainer.

This past Saturday I installed the oil filter conversion. The 2010 and up model's came with a spin on filter instead of the horrible canister filter that the older models had. Total time changing it was about 20 minutes including changing the oil. I had been having a leak which I thought may have been the rear main, but there was oil around the filter mounting so I wasnt sure. The canisters tend to leak. It could have been my oil sender but I put a new one on just in case.

Old canister housing (the oil is from taking it off) 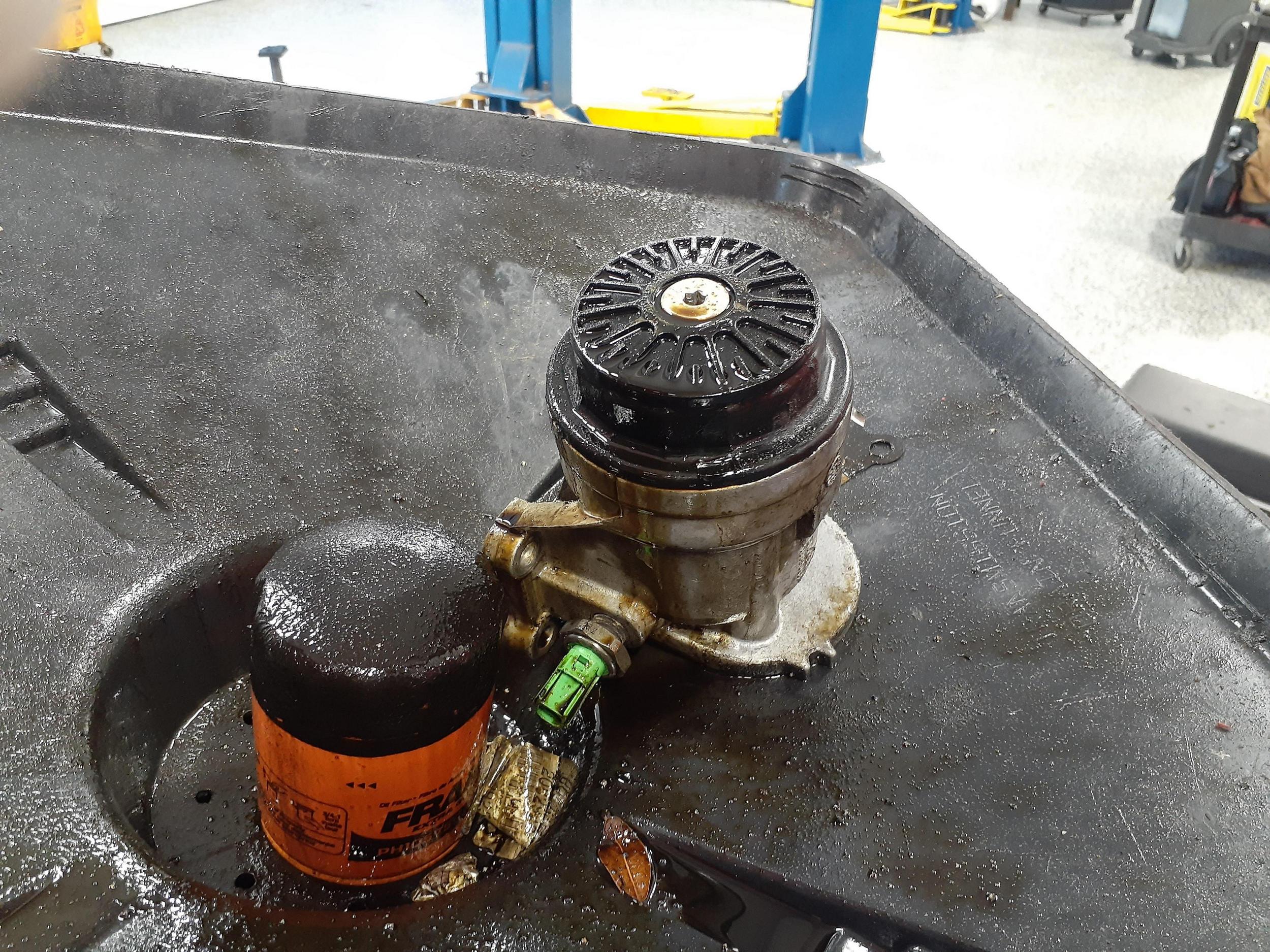 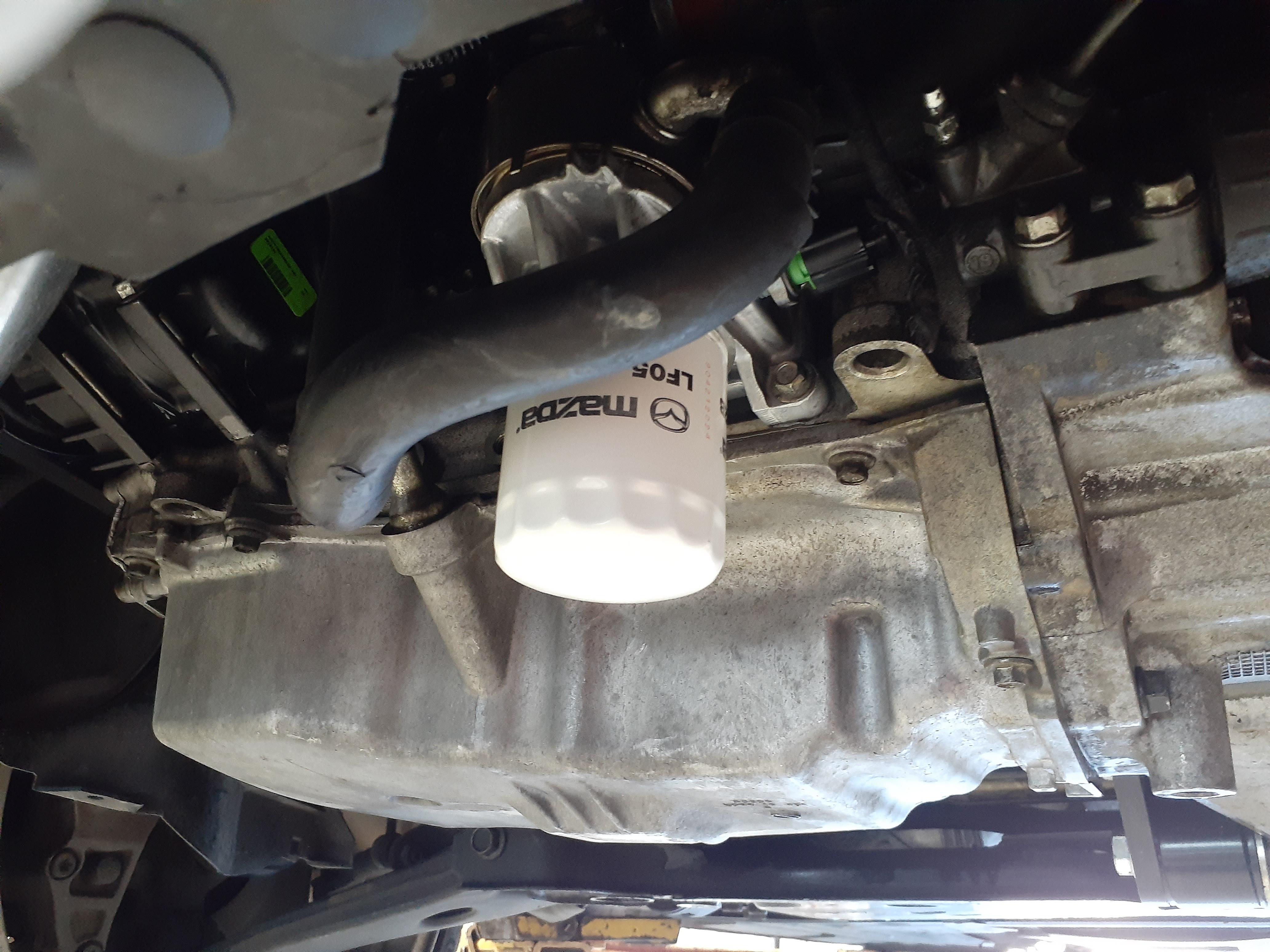 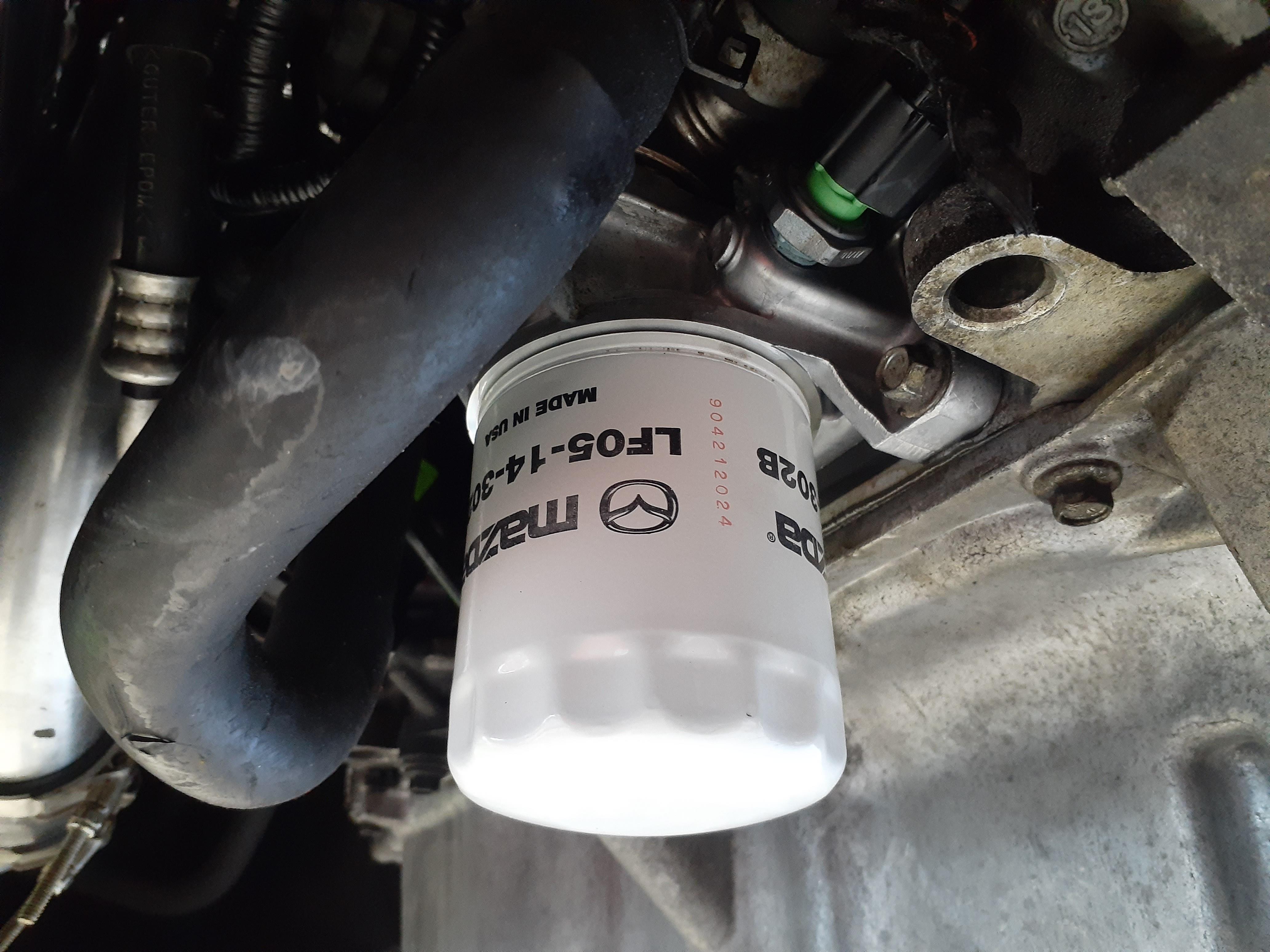 I really need to get back to working on my Miata but it is in the yard which is soaked from rain. I may have found a built motor to buy so hopefully I won't have to pull the other one and then build that. I'll just have one to drop right in.

I should be getting the front lip painted today at work. Once I get that I'll be able to mount it to the bumper and install the fix kit. I wanted to install the skid plate but whoever had the car before me cut the mounting area off the side water shields. Guess I'll order those too.

Also on a second update they finally redid the floor for the shop I work at. This was done about 2 weeks ago. We spent an afternoon clearing out the shop which sucked because I lost out on time for flat rate hours but the end result was worth it. 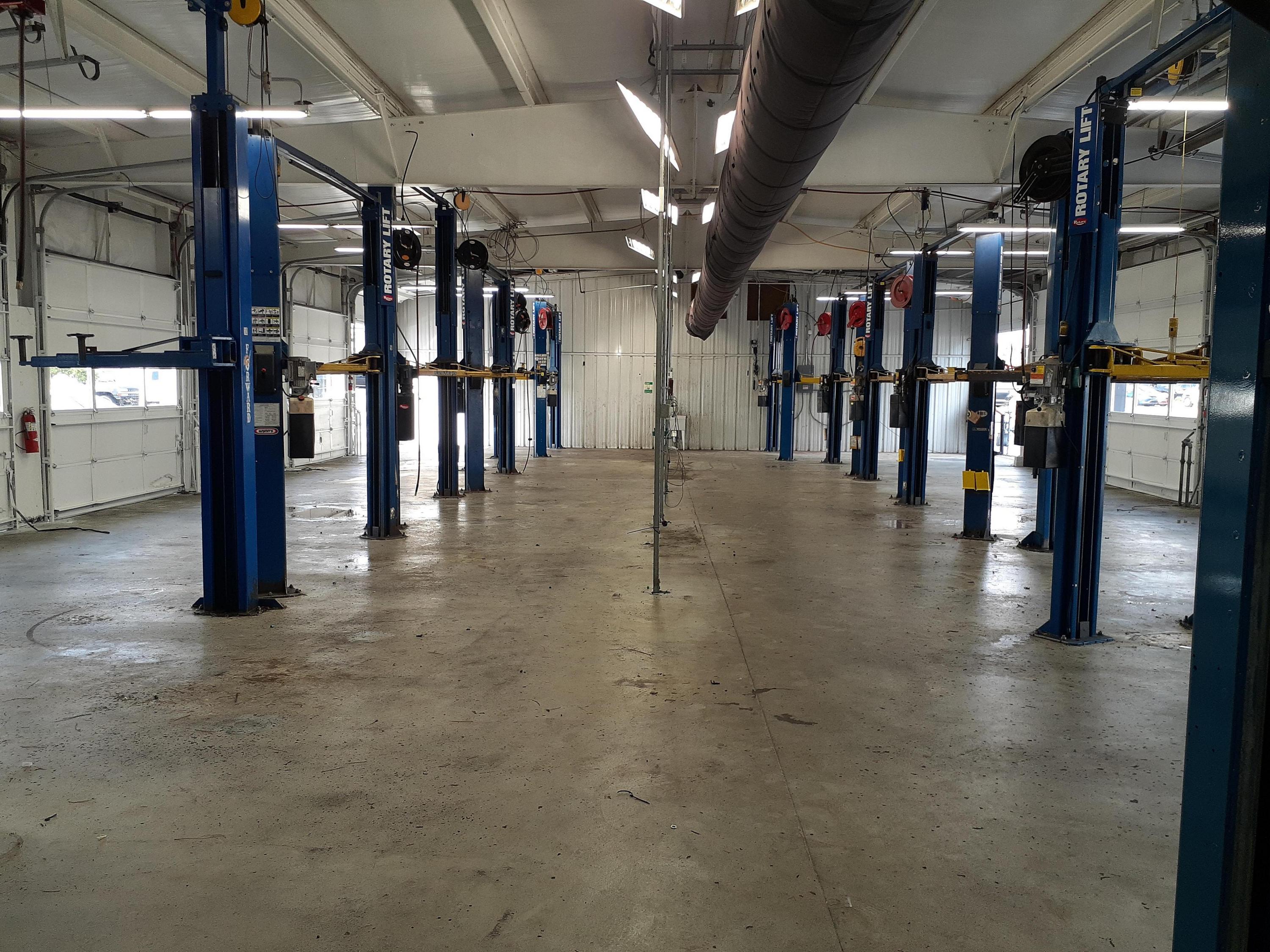 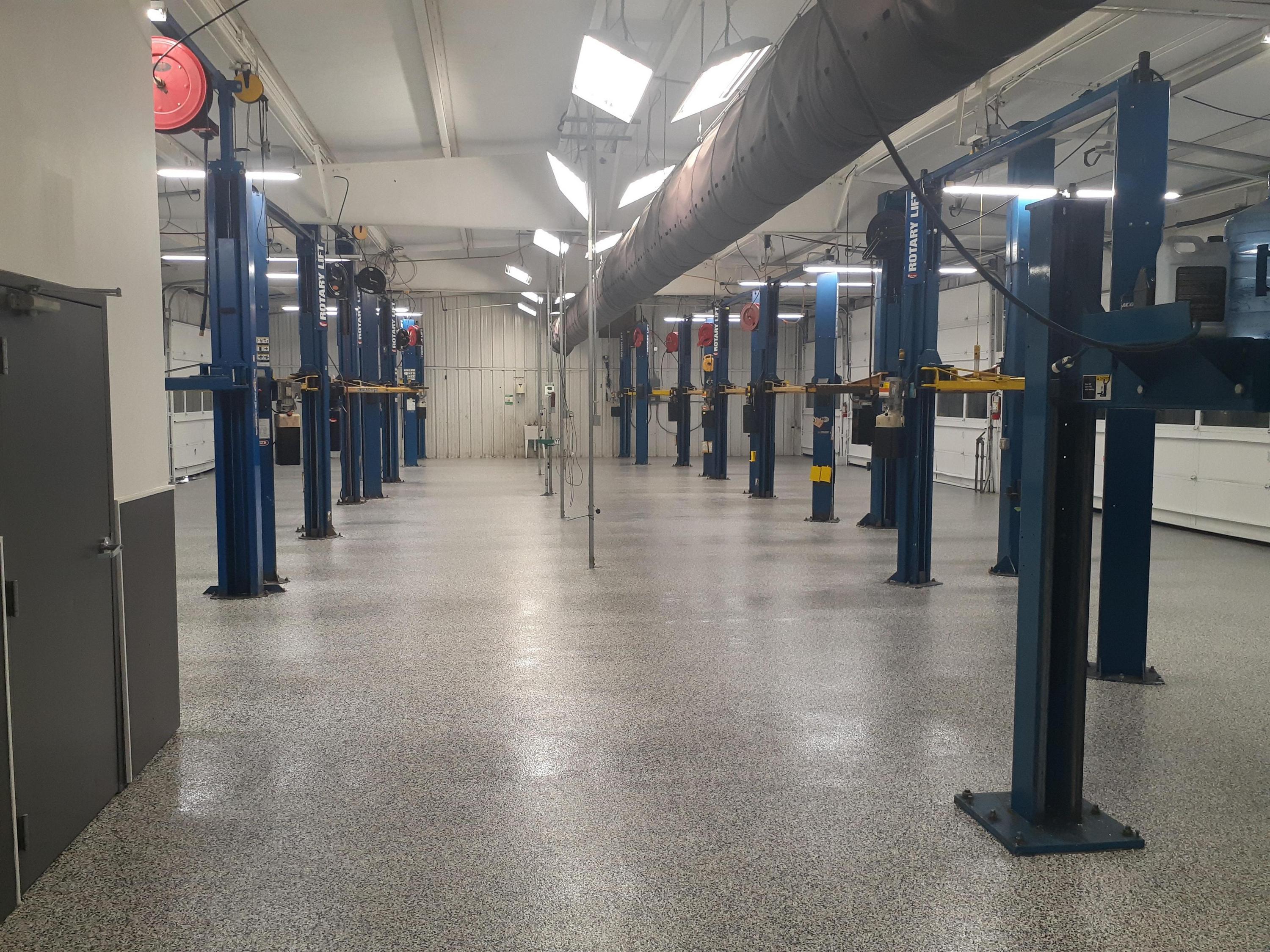 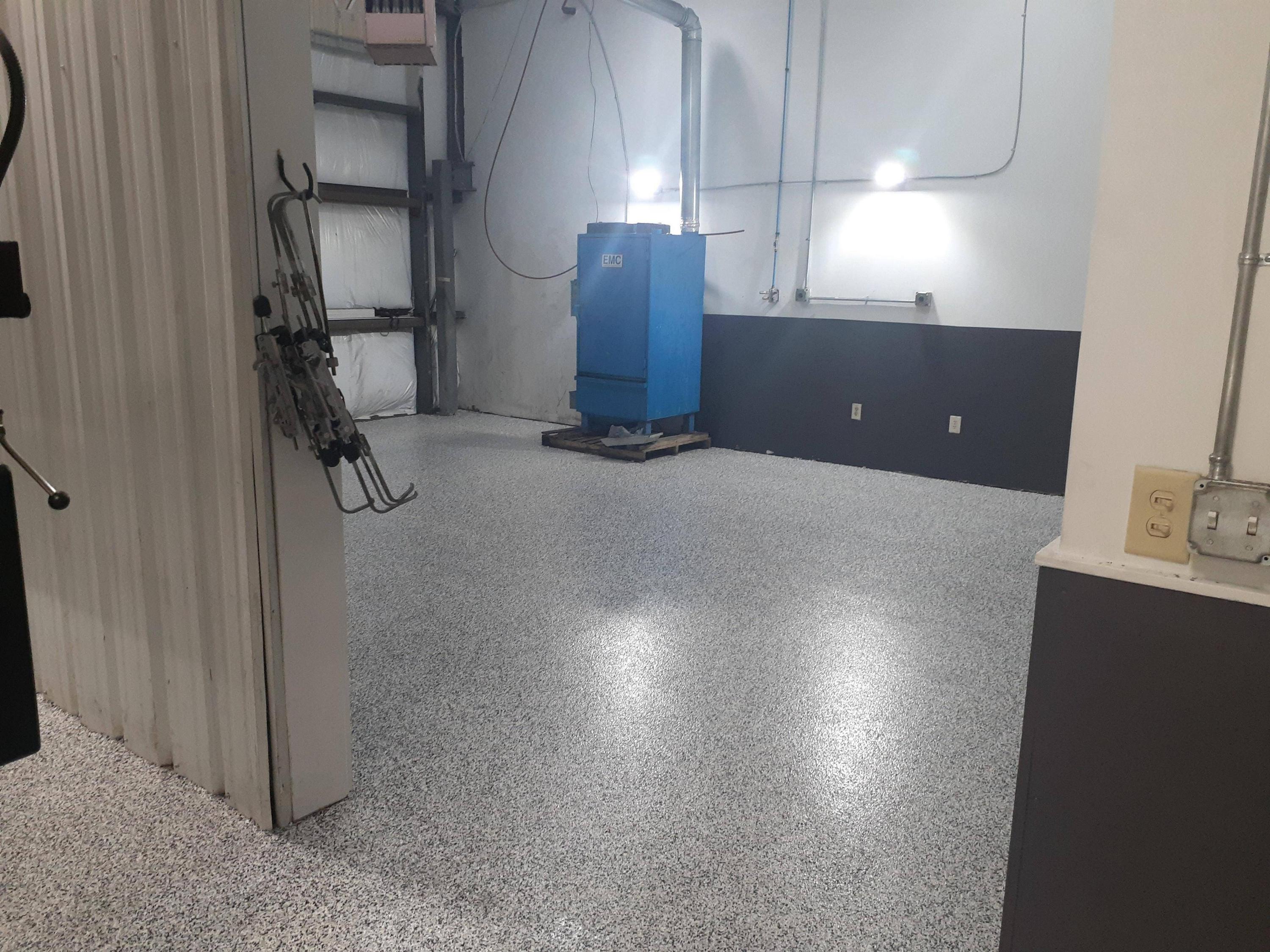 New update! About 2 weeks ago I installed a BNR S4 turbo to upgrade from my BNR S1. I also went from a smaller 2" inlet to a 3" HTP intake. The car seems to be running well. Only 14 psi right now until more tuning is done. I have also been working on the ported intake manifold with VTCS delete.

I finally got the block off plate to remove the EGR solenoid itself. It had been blocked off at the intake manifold but the larger intake required removing the solenoid itself. 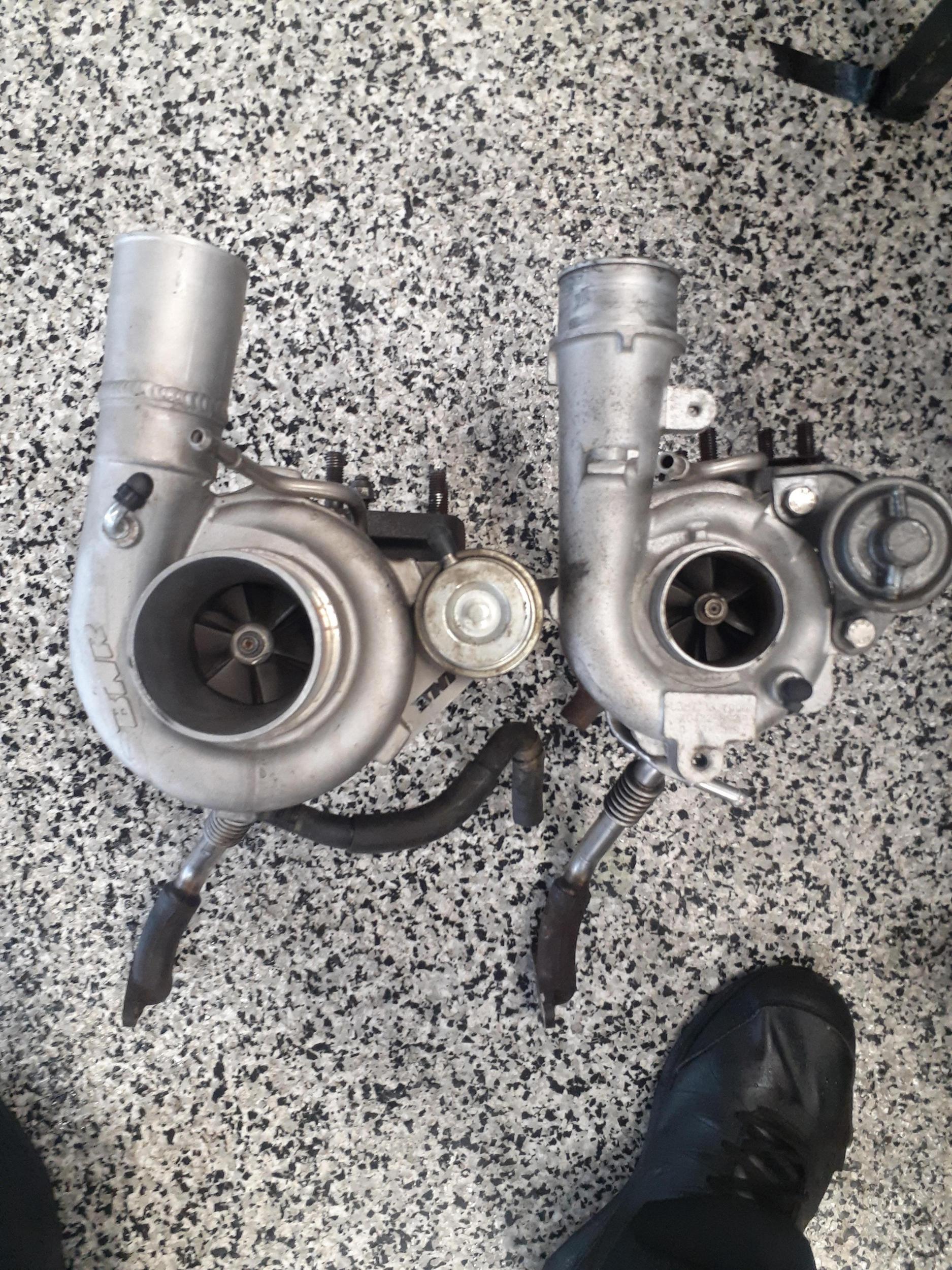 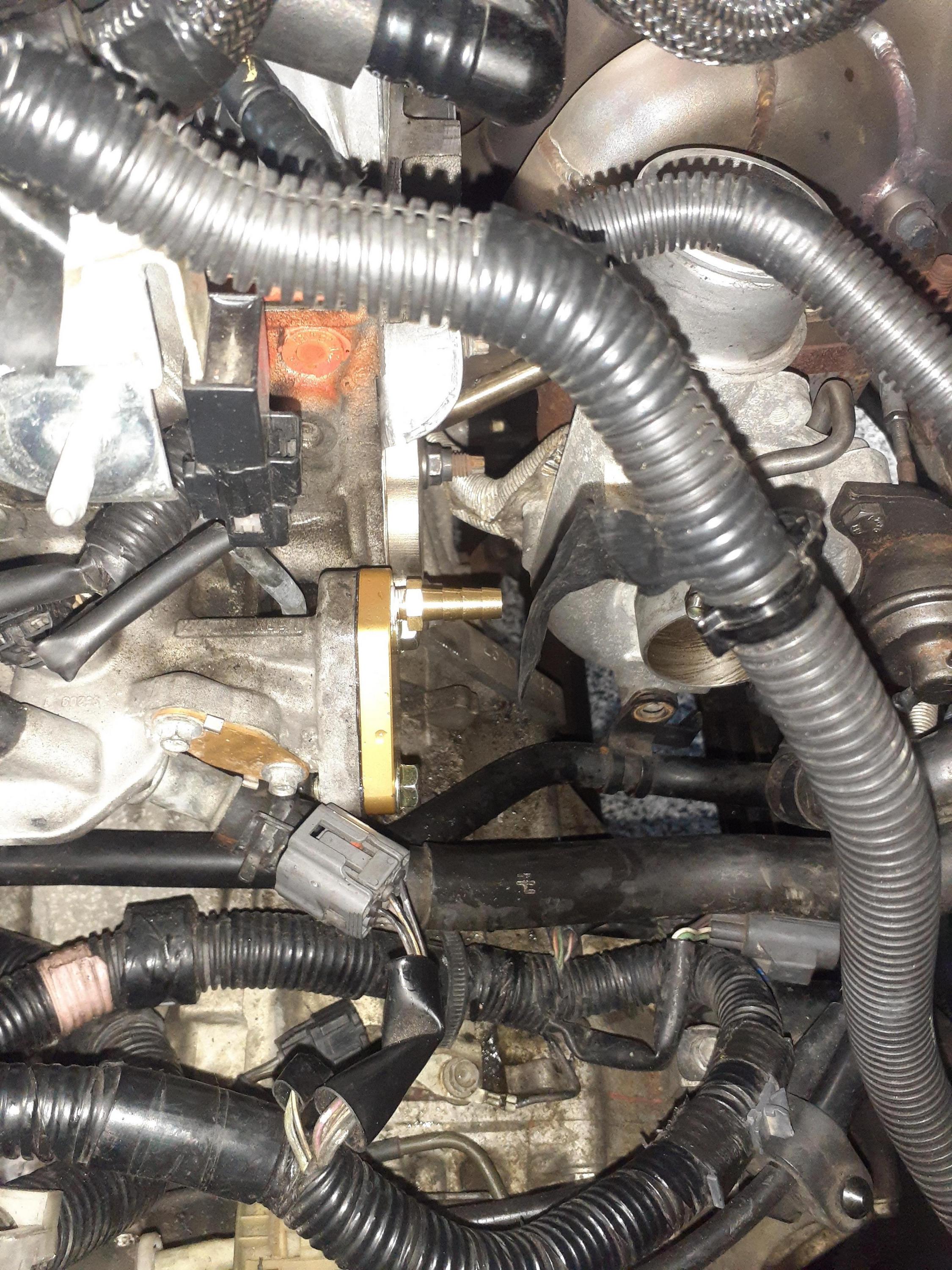 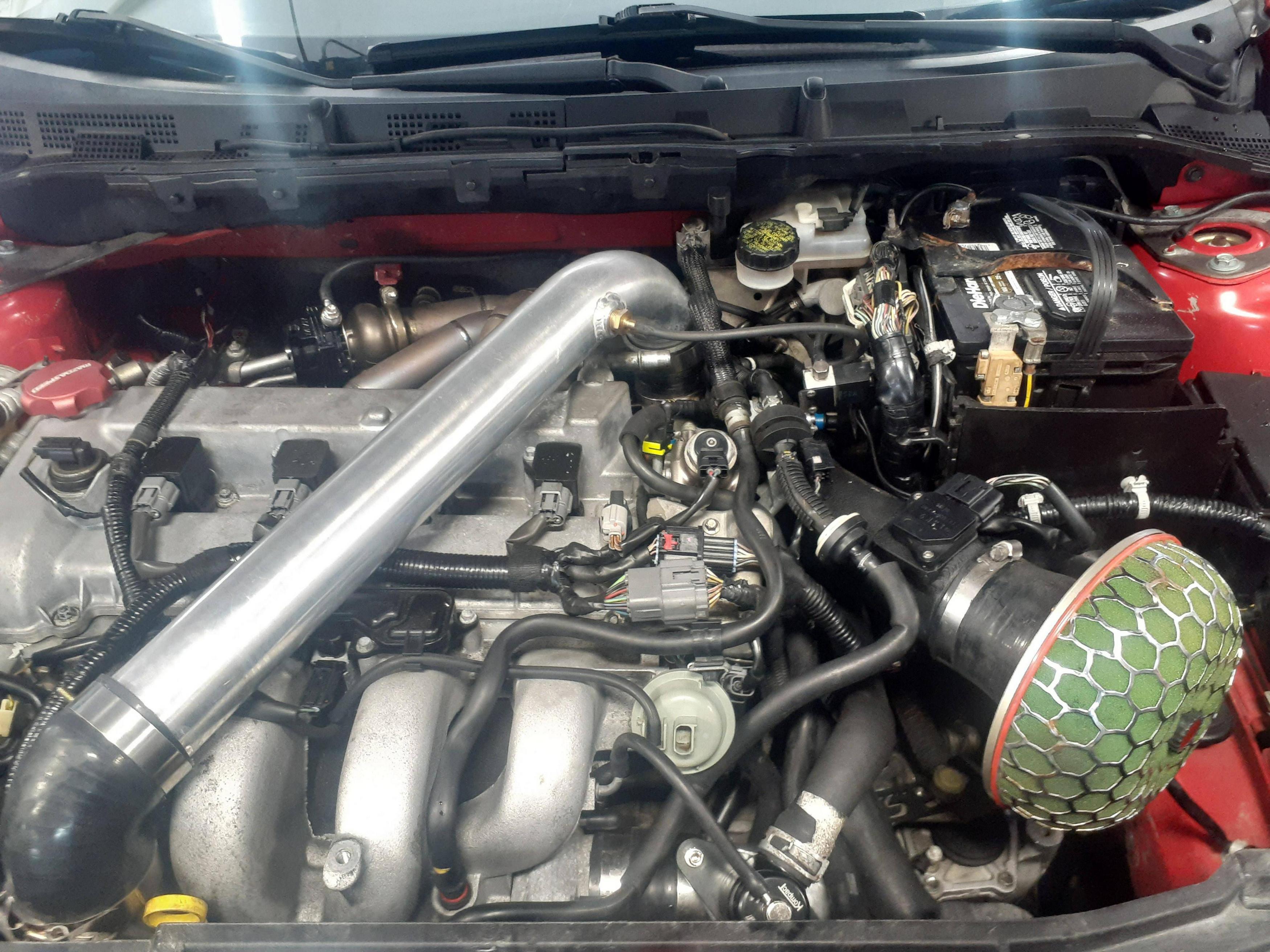 Looks great!   And I see you pulled that filter up.

I bet that thing pulls hard even at 14psi

Looks great!   And I see you pulled that filter up.

I bet that thing pulls hard even at 14psi

Actually it seems slower at 14psi than my old turbo at 23. But that's probably cause it's on an ultra conservative tune at the moment.

I did put the filter higher cause you had me worried about hydro lock lol. After you had responded to the post whenever it rained I thought "damn kev better not be right!"

haha.  I'm glad though, I'd hate to see anyone mess up an engine like I did...all over a stupid cold air pipe.   Not worth the 2 extra hp.

Probably makes sense.  I'm sure the larger turbo takes more to spool up as well.   That's what I have my cq at now, 14-15 psi.   I want to increase it but need to get it on a dyno and tune it in.

New update. Almost finished porting my spare intake manifold. Got all the ports done and now just need to work on the throttle body inlet.

Intake Manifold before porting with VTCS butterflies still in 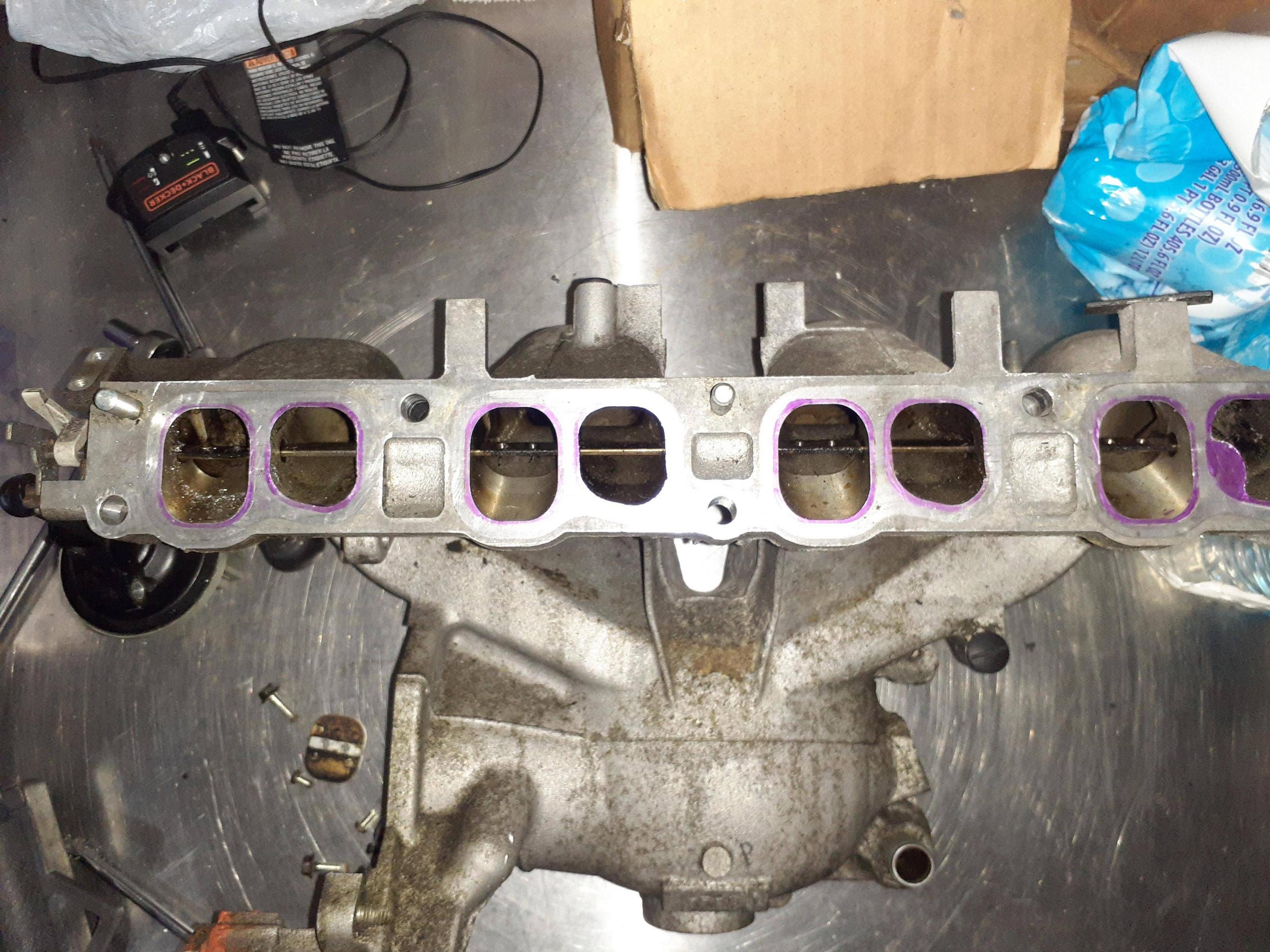 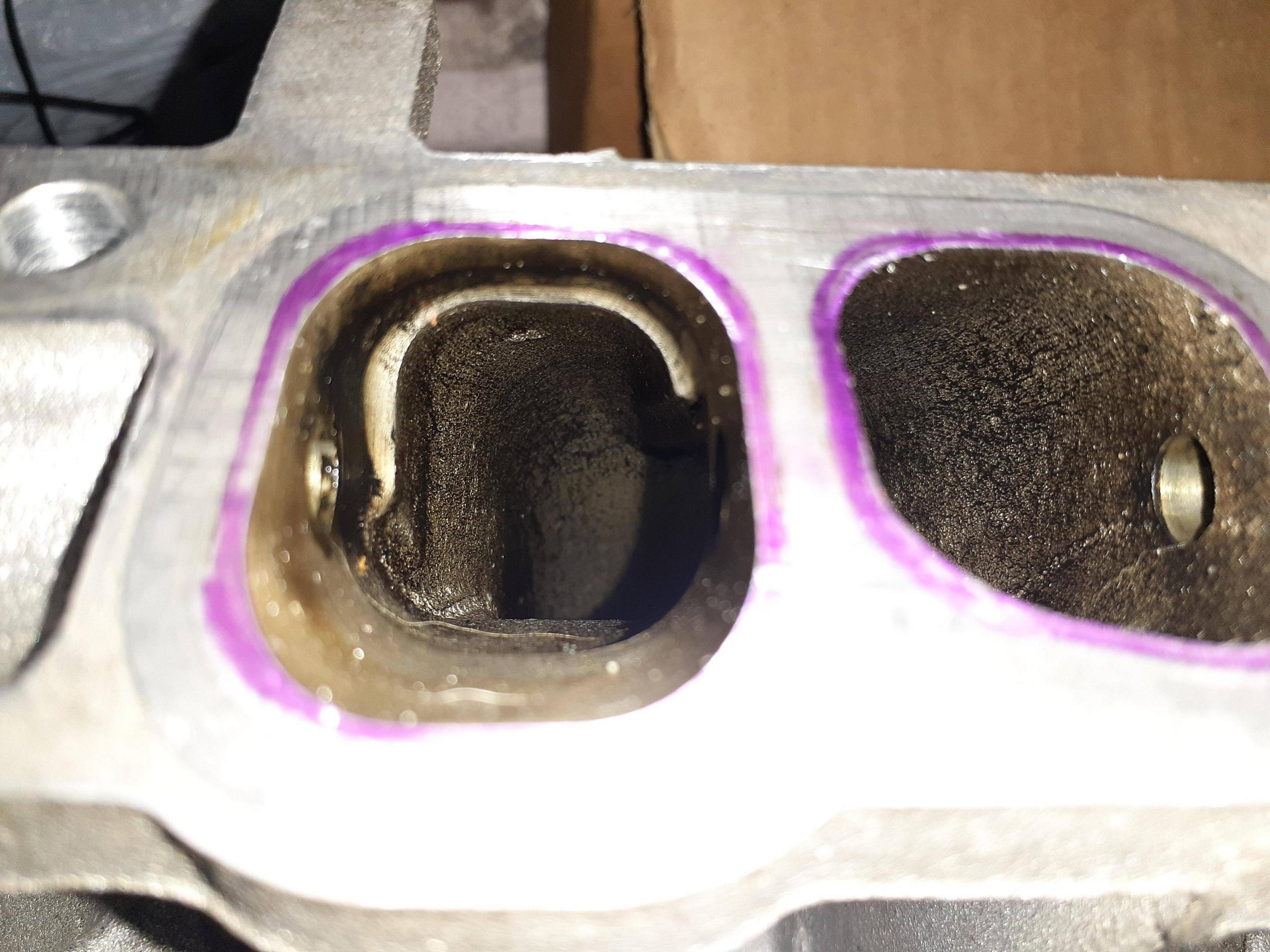 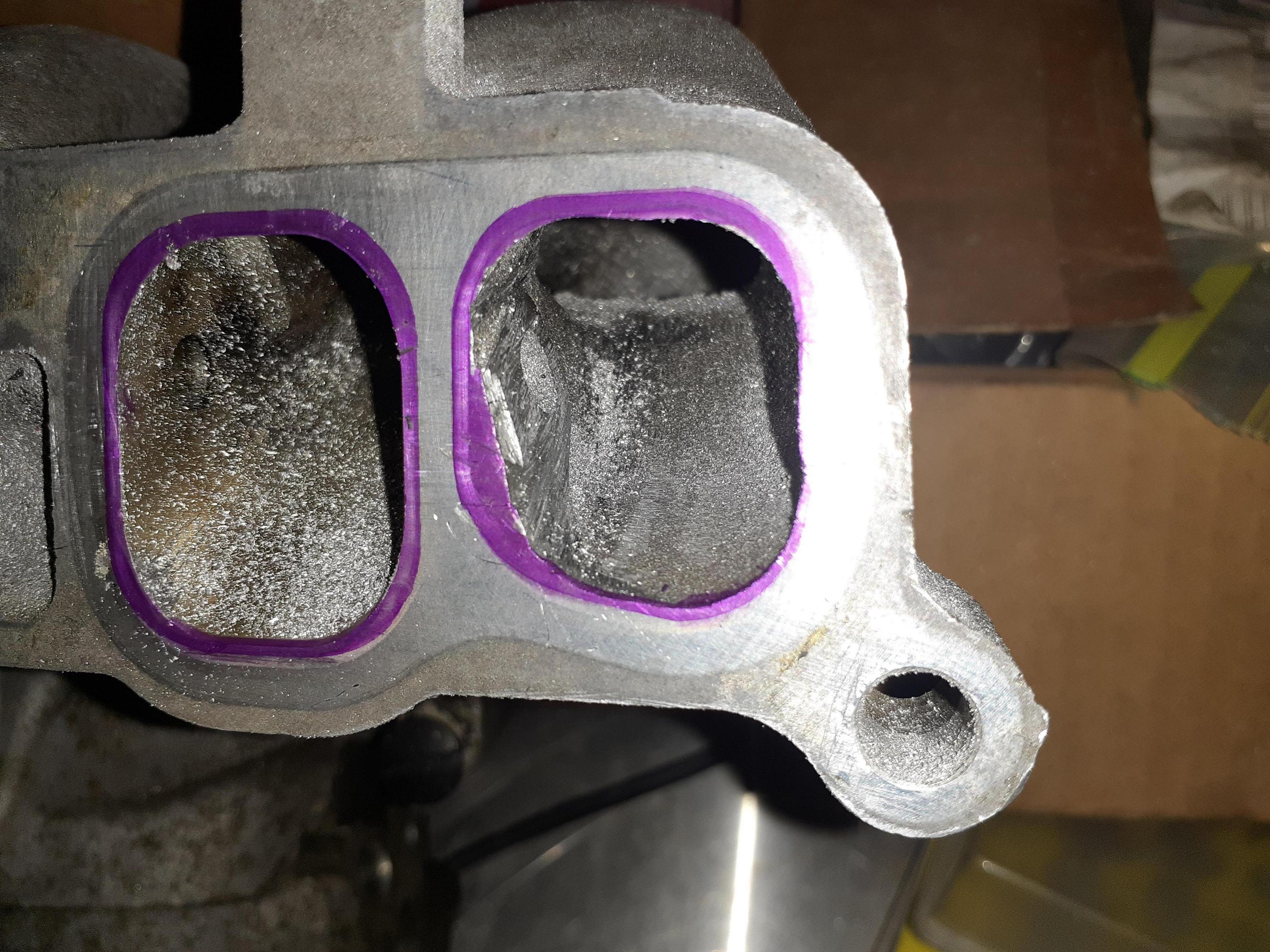 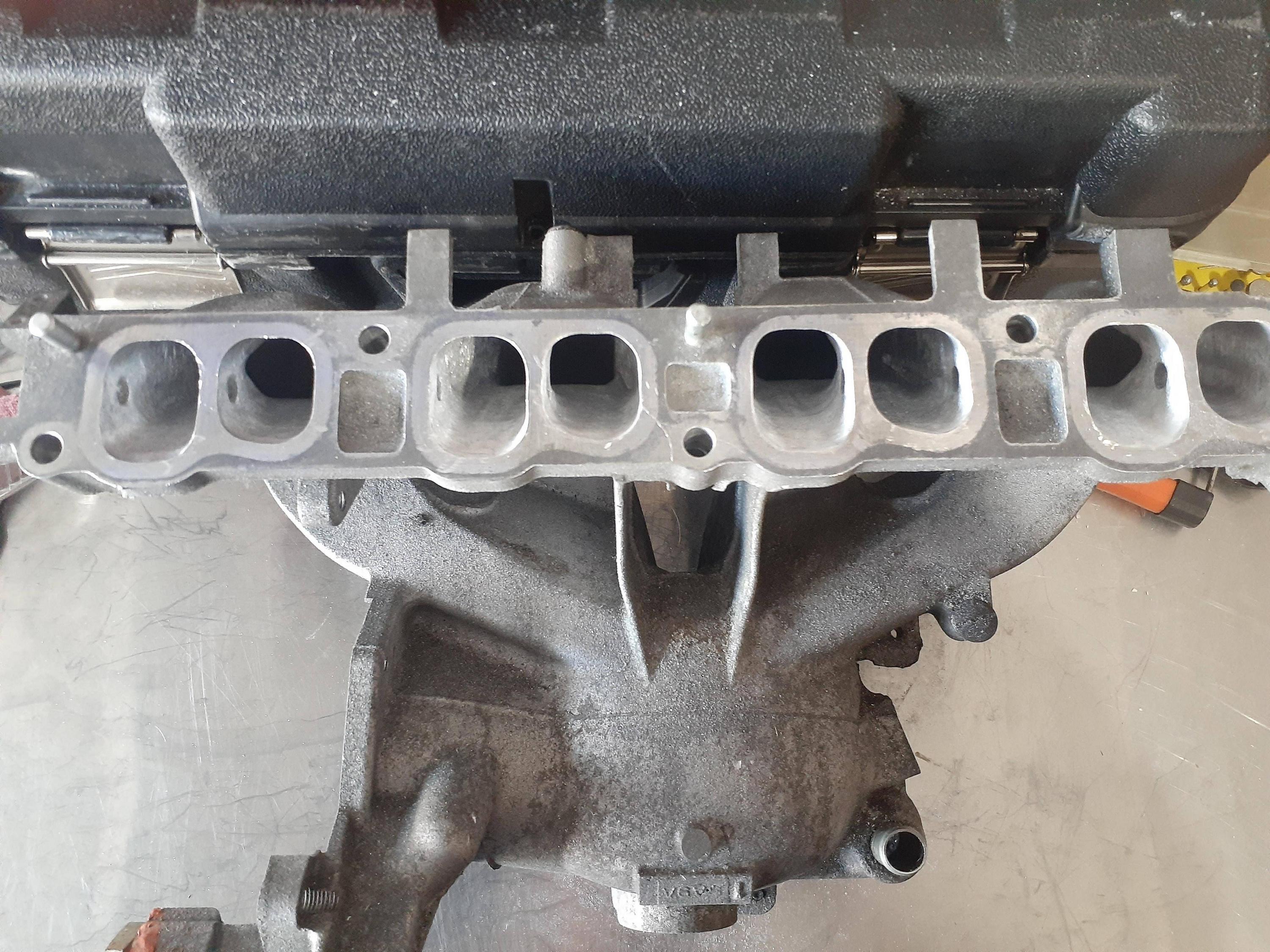 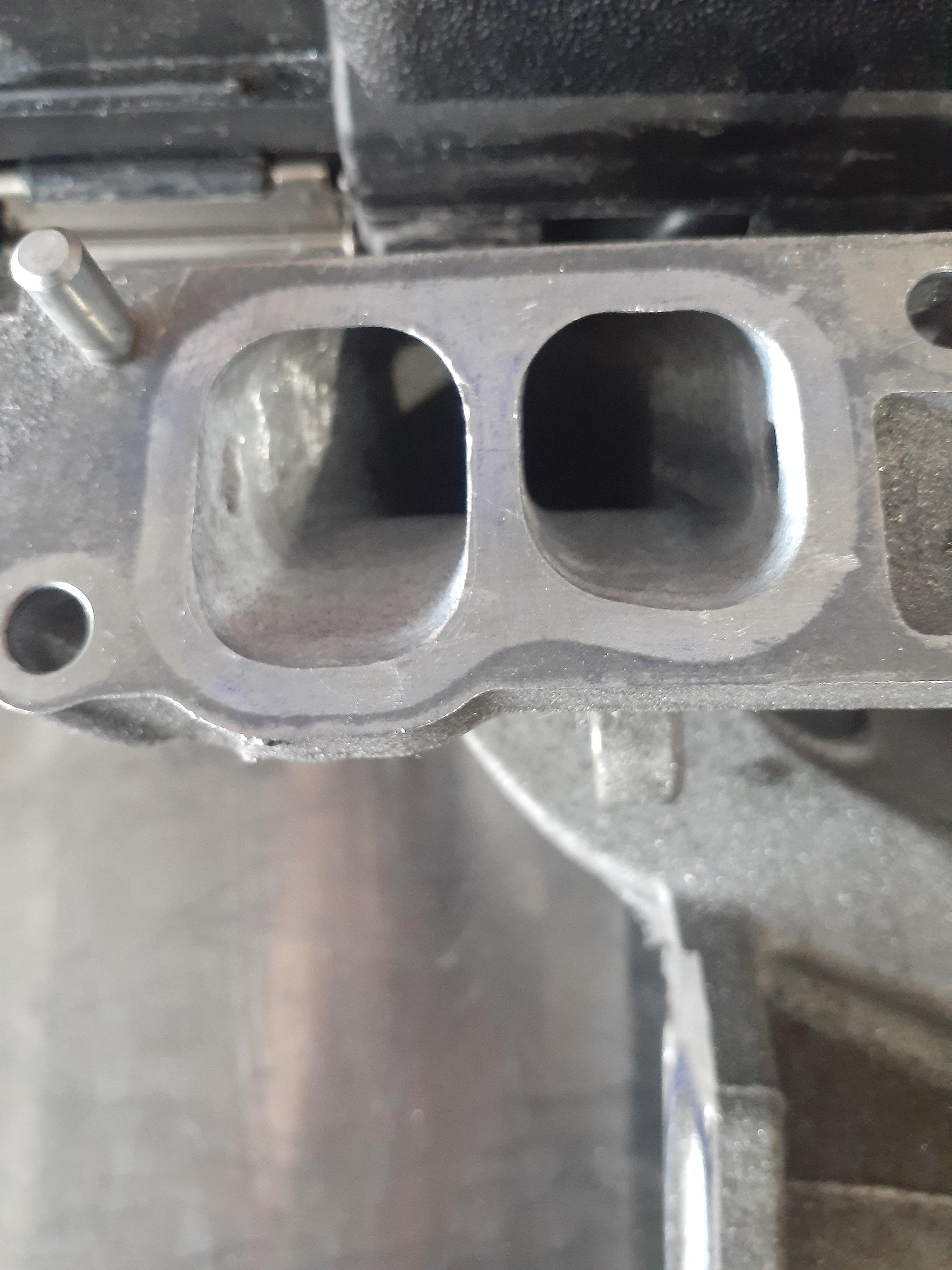 And now all that's left is the inlet. As you can see they drilled the inlet off center and if I wanted to upgrade to a large throttle body I would need to open it up 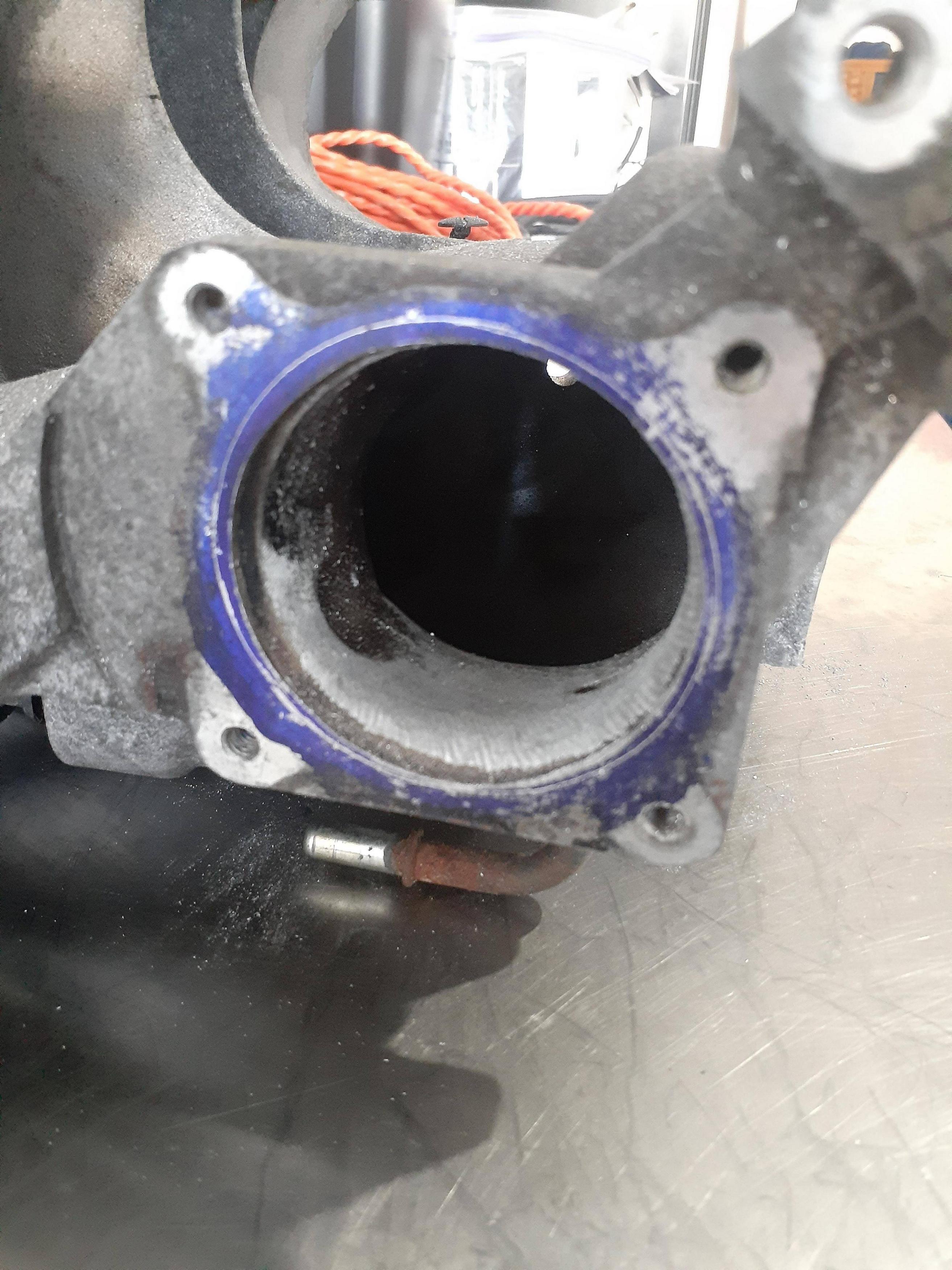