48 replies to this topic

Im following a little too close

Definitely following this! I just don't usually post replies because I don't know jack about Mazdas.

Skid plates are great, though. I always had them on my Subarus. They help keep the engine bay clean, good for aerodynamics, and god forbid, if you ever hit anything...

What's the plan with the Eunos?

A year and a half ago I must've done some damage to the 1.6 engine on the track. Been having a knock ever since and the oil pressures been getting lower. So it's been sitting that whole time.

I have an NB car (99-04 Miata) I bought for parts and planned on pulling the engine to build that for the RHD. Well I found a good deal on a used built engine so it saved me a lot of time.

New engine is a 99 1.8 (BPW non VVT engine) that has Wiseco pistons, H Beam rods, ARP hardware top and bottom, dual valve springs, Boundary Engineering billet oil pump, ACL bearings etc. Some of the 1.6 stuff swaps over too so I'll save cash there.

I'll be taking the exhaust cam from the NB and cutting off the camshaft sensor portion of it to do a cheap cam upgrade (basically 278 duration exh and int) plus I found a new old stock Ford valve cover and timing cover kit for the engine too from a 90s Escort GT.

Overall it will yield me a lot more torque and I can run a lot more boost than I was before.

Im following a little too close

Do it! He says he has a built motor for it and the trans for extra. They arent hard to put in, would take a day to do it. With what I'm running now I'm around 400 wheel horsepower with bolt ons. Basically I'm at the max the fuel system can handle stock but it's fine. That looks like a clean roller and already has some goodies.

I still have an AEM intake and a BNR s1 turbo I can send you if you get it.

Oh, awesome. A friend of mine in town has a turbo NB with a built bottom end and it's a riot.

Wow just checked this and realized I haven't updated this in months. Not much is new on the Speed 3. Had a brake line fail due to my EWG dump tube rubbing a hole in it. Luckily I caught it before brakes ever failed and I was able to fix it for less than 30 dollars. Took the line out the driver's side. It was the LR hard line from the ABS module. Then took an 8" section of tubing, did a bubble flare on one end (that goes into the block near the EWG) and a double flare on the opposite site to the union. I got real lucky that I did it with my old manual tool and it was a perfect seal the first time. We have a hydraulic tool that does perfect flares but I couldn't find it in the shop so I had to do the old school method. 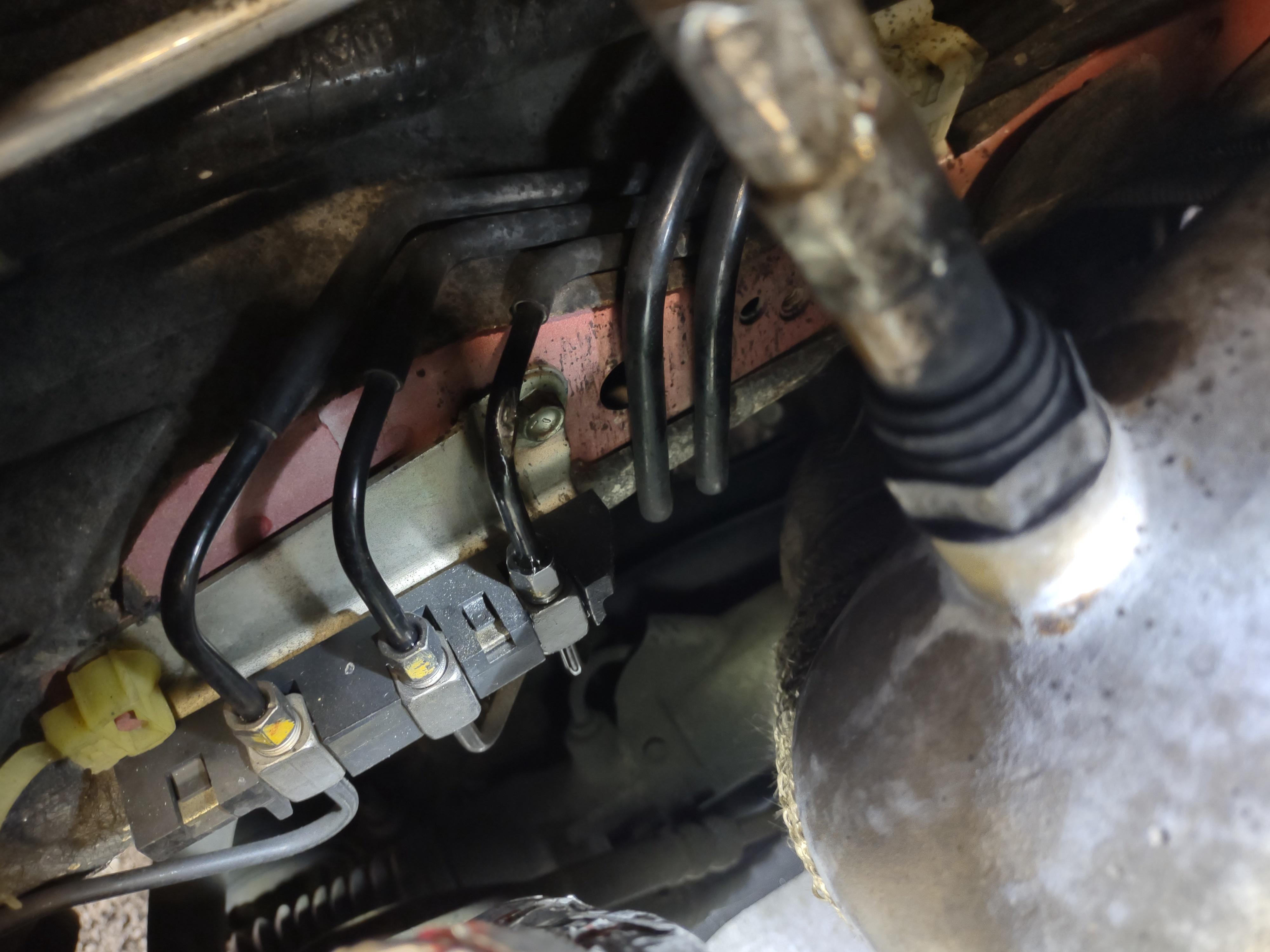 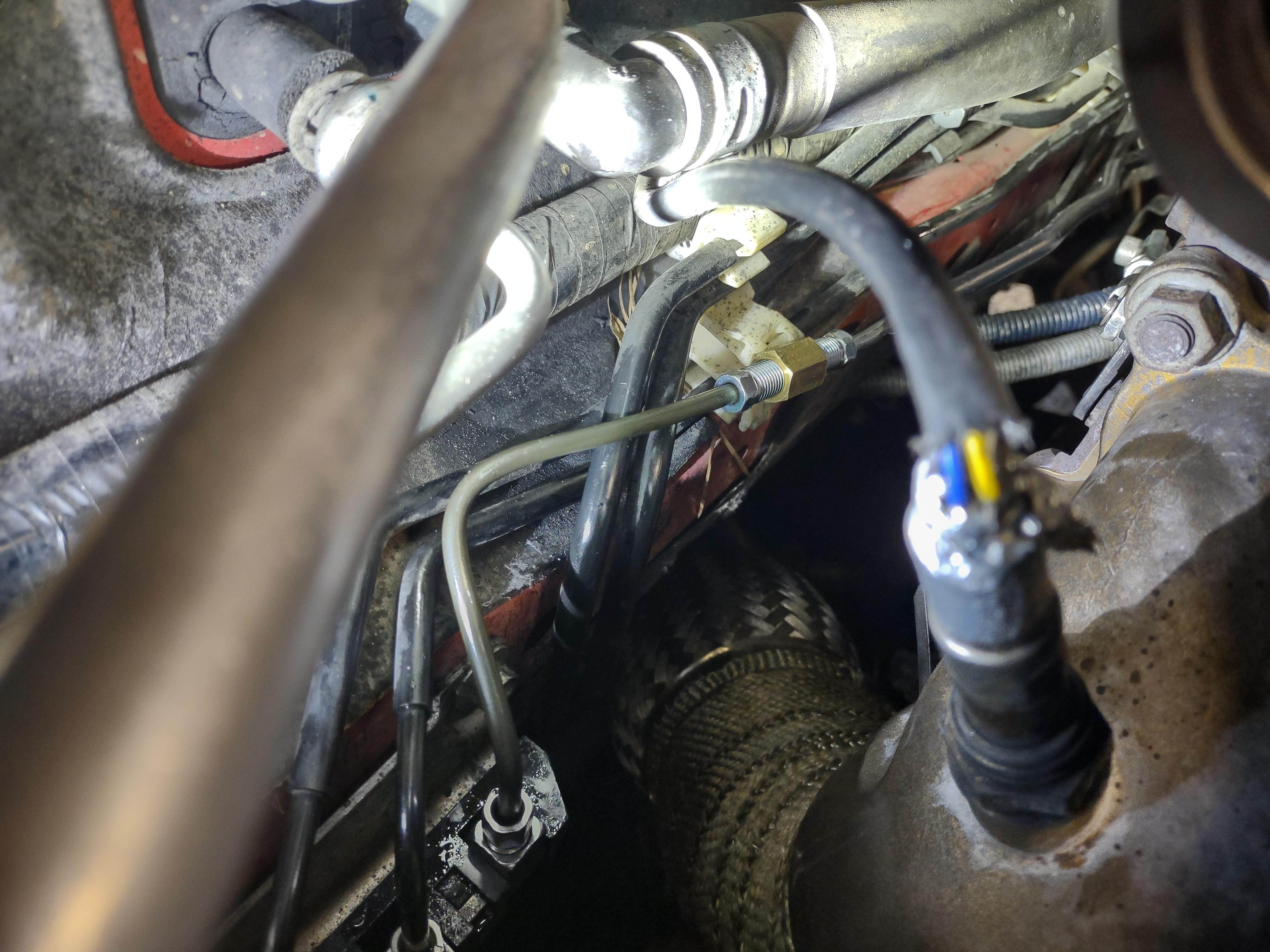 Wow, so did you modify the dump tube for more clearance, or is there more room with the new line? I hate aftermarket parts that just don't fit quite right.

Wow, so did you modify the dump tube for more clearance, or is there more room with the new line? I hate aftermarket parts that just don't fit quite right.

The dump tube is a V band flange and I needed to clock the tube a certain way. Basically it has to be right against the downpipe to prevent it from rubbing the lines.

I bent the new line for more clearance. There is about a 1/4 inch of clearance now.

car sure found a good home. Mordern iron not my thing, but you put the "right touch" on it

car sure found a good home. Mordern iron not my thing, but you put the "right touch" on it

Thanks dude! I also forgot to post about my oil pan leak I fixed a while back. Here's some pics. Called for around 7-10 hours on ProDemand for labor time but actually took me about an hour and a half to fix. They want you to pull the trans or timing cover but the pan can be slid out with some finesse. When you go to reinstall it just use a soft rubber mallet to tap it back up into place if there is any tension.

Skid plate showing how bad it was leaking. 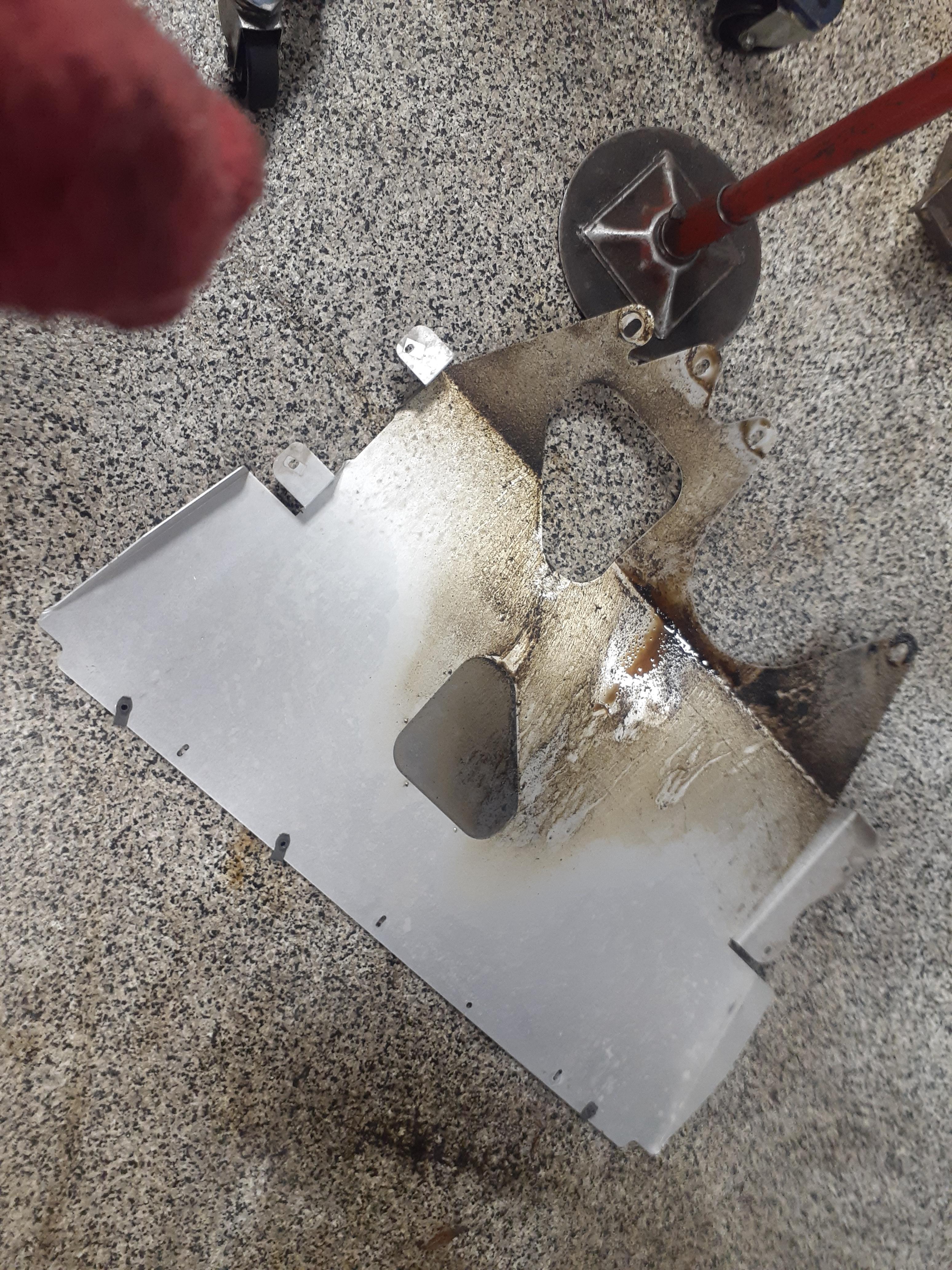 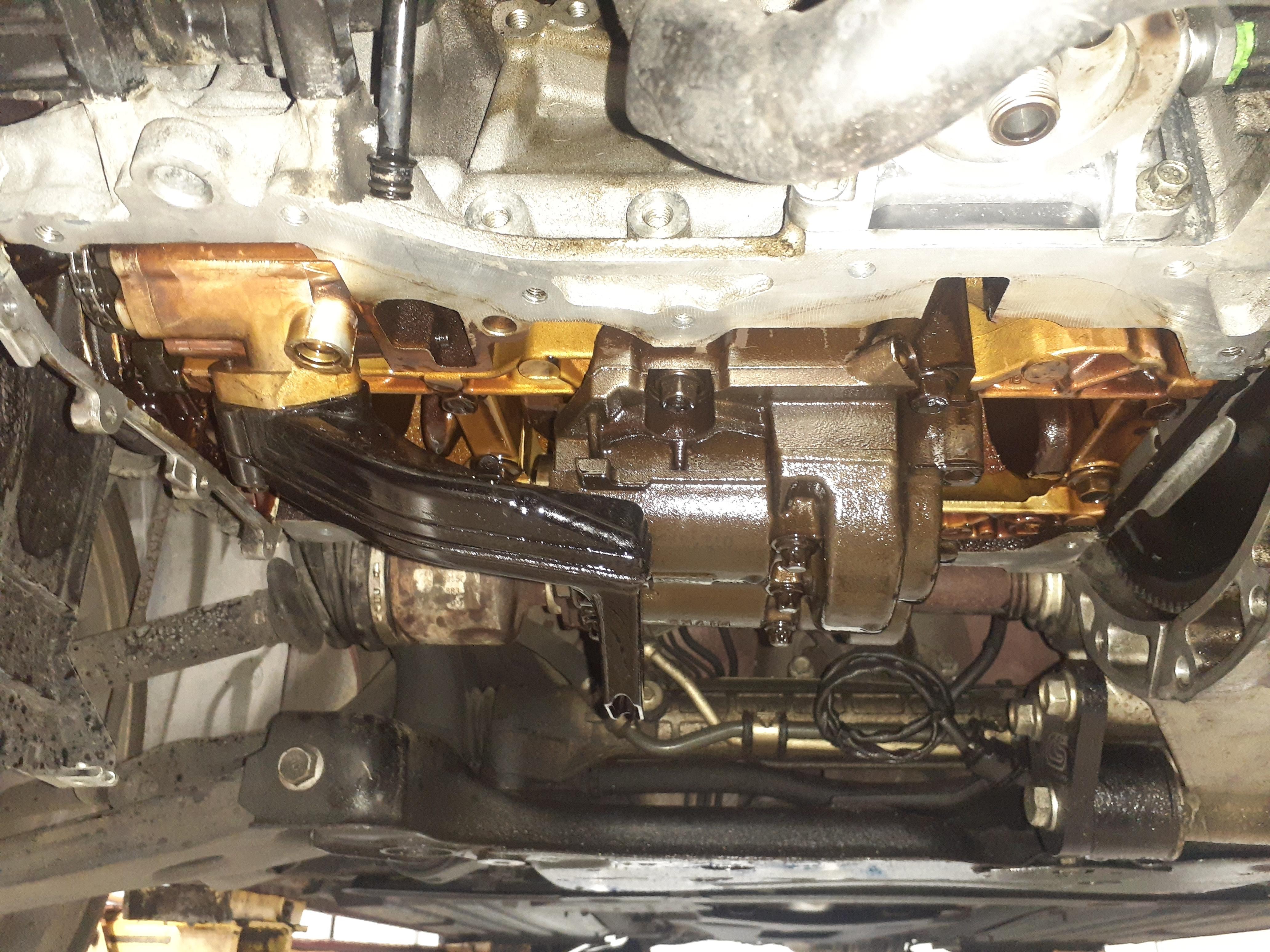 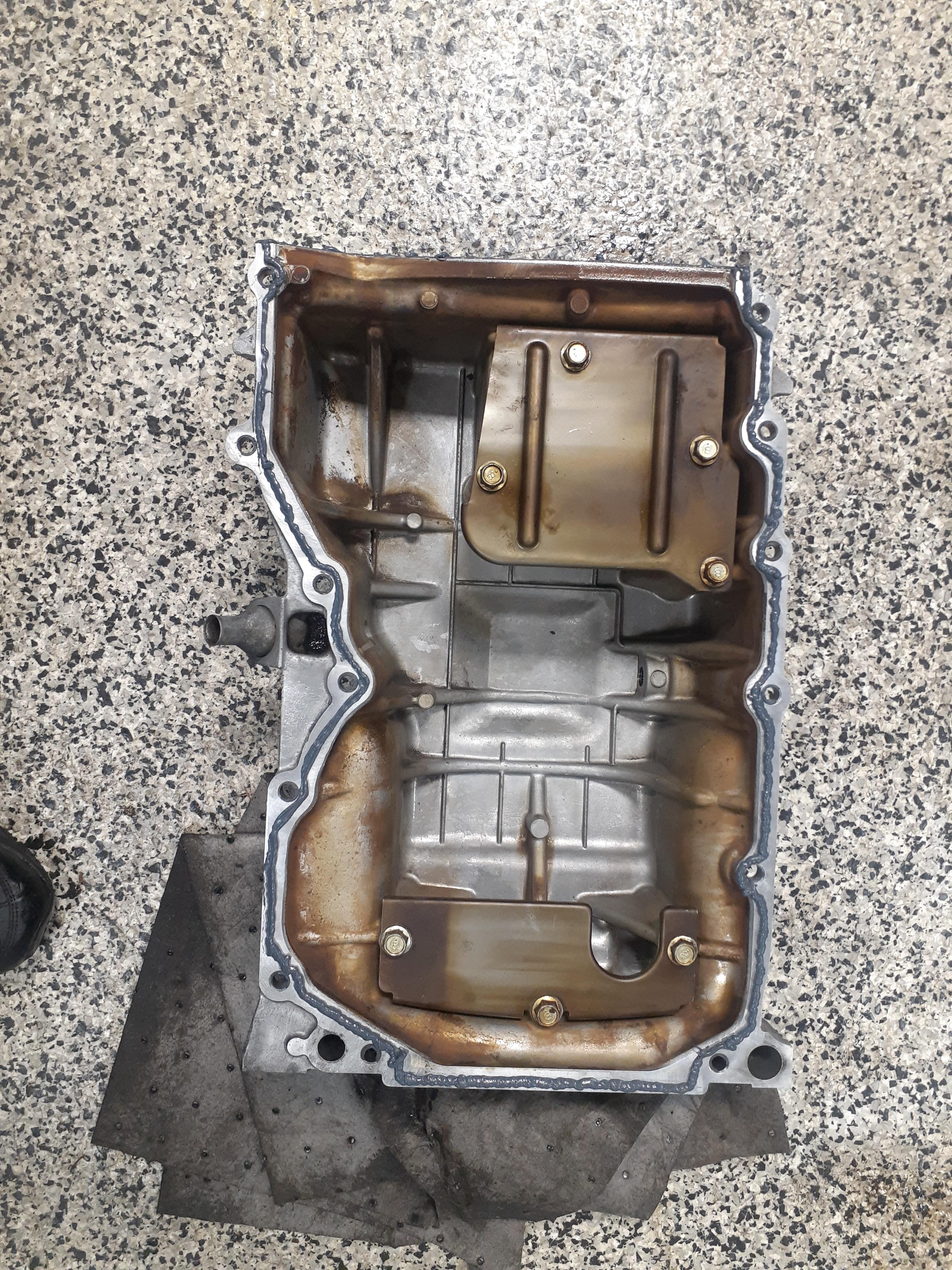