89 replies to this topic

I decided to post this up here for those of you who don't get over to project zero g that often.

I bought this car back in feb 2008 off jason (boosted88tsi). All I knew is I liked how it looked and I could put a 4g63 in it. It drove and I needed a daily driver, so I bought it with the plan of "eventually" doing the 4g63 swap. Here she was:

Well as some of you may know, this only lasted about 4-5 months. This happened:

My original plan was to daily drive the conquest while I turned my 1990 eagle talon tsi awd into a road race car I could be proud of. I had sent the motor out to be "fully built" only to find out the guy I sent it to was a crook and took my motor and a chunk of change. I had also bought a 1993 plymouth laser fwd turbo which I had parted out. I made some money off it and still had the motor sitting around, so I decided to get my talon running again with that motor. No more road race car I guess.

I still can't get over this car

After I got the talon running I was driving one weekend only to get run off the road by a drunk driver. I totalled my talon and was devistated.

so now I had a car with no motor and a motor in a totalled car. Seemed easy, right?

I spent the next year or so reading up and playing around with what I had, wiring and such. I didn't have any money so I kindof just let things sit. I was in school. I test fitted the motor and thought it would be soooo easy.

Then I decided to take a year off of school and got a 60 hour a week job. when you work 60 hours a week its hard to spend your money on stupid little things, so this happened:

got a cosworth crank scraper

picked up an evo 8 crankshaft which is 5 lbs lighter

check out that nothing special unshrouded combustion chamber! (I don't remember if this was the final product or not)

eagle rods (they are lighter than most aftermarket rods and can take the power I'm planning on, although we did re-size and hone the big end as it was slightly out of round:

during this time of purchases left and right, I was also porting the hell out of my cylinder head, as well as removing the flashing from the cylinder block.

apparently I don't have any photos of my combustion chambers or ports on my photobucket. I know I have them somewhere if someone is dying to see them, They look like any other ported head though... So we mocked everything up, crank scrapper, clayed the motor for valve piston clearance, etc.

some clearancing was needed for the evo 8 oil pump to bolt up to a 1g dsm block and tensioner arm:

as well as the cosworth crank scraper:

Finished product, You should have seen the smile on my face: 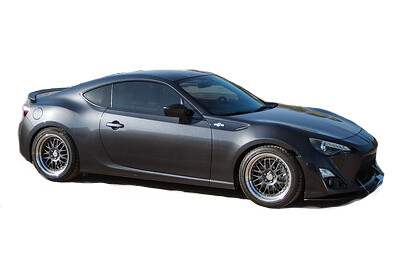 That's great!  Really liking it so far.  Keep up the good work and keep us posted.

Your rear wing is black.


Sick build. Is the final picture where you are now?

not even close. I just got tired of typing and copy/pasting

thanks for the compliments guys. The wing is black because I'm guessing jason painted it black. I love it though so I'll probably re paint it black when I eventually get the car painted.

Do you have a build thread up anywhere else? like a local forum or a 4g63 forum?

It's gonna be awesome.

swap looks very potent!
if you don't mind me asking, how much that T56 trans adapter cost you?

I think they normally go for around 500 or 550, but I asked for no clutch fork, throw out bearing, etc, so I got it for a little cheaper. I'm also only the second person to use this bell housing because its the long shaft version of the t-56 and not the short shaft lt-1 version. The transmission was about 1000, the internal hydralic throw out bearing I'm using was around 300, the adapter plate I had made for said tob was 60, the short shifter was 200 and the master cylinder was 90 plus about 20 or so for lines and fittings.

way to make me realize how much I've spent on a stock 6 speed transmission, hahaha

So during all this time of engine building I had a car with no engine in it. It was really dirty and at one point or another the brake master cylinder had leaked all over the frame rail and it was missing a lot of paint. I don't like rust so I decided to paint it. I cleaned it a ton, heres how it looked:

Then I decided that wasn't enough, so I went a little further:

I could only work on it during the weekend so thats why I painted it with whatever paint I had lying around after I was done for the day.

I then decided the wheel wells were nasty and decided I'd paint them too. So I started stripping the rubber liner crap off them

I don't have any finished pictures on my photobucket but moving on, I then borrowed my buddy's barn/garage and built a paint booth. Check it out:

and then, there was the finished omg product:

A "barn/garage paint booth" now thats something I would like to have....haha.
Preping the engine bay and front end is the least you could do after spending all that money.

Those trans adapter/bell housing from Bill are doing great things for RWD 4g63 swap...so many options.

unfortunately this was my first time every spraying anything with a professional spray gun. I now know that it takes practice..... A LOT OF PRACTICE.

Its much better than before so whateva

I was joking, you didn't have to edit your post since I mention it in the first sentence of this thread, lol.

Its the internet so people are going to find it, I'm mainly making this for myself so everything is more orginized, relevant, and all that rambling I'm so good at isn't here. People don't like to read rambles that often.

on a freshly powdercoated subframe none the less:

ok so I might have gone a little crazy with the bead blaster, can you blame me?

and probably some more.

but it was time to start thinking about the transmission. I didn't want to have to look at that ugly brake booster in the engine bay anymore, and I knew I was re-doing my brake lines for non abs. My buddy who used to work for tilton suggested this solution:

for those of you who can't tell because of the horrible picture, thats a tilton engineering overhung brake and clutch pedal assembly with dual brake master cylinders and adjusting bias bar for driver controlable front to rear brake bias. The second picture is of my tilton engineering internal release bearing assembly. It replaces the slave cylinder, clutch fork, and throw out bearing all in one. Its a good deal shorter than the oem unit, but its much higher quality and much easier to bleed. Here is my prototype custom spacer:

And now were in business. Just gotta slide that transmission into place all easy like and then make a crossmember for it, right?

I have great friends by the way. A buddy of mine let me tow my car to his shop and leave it on the lift for what was supposed to be a week or two at the max. I got the car all ready.
ported the turbine housing:

put the turbo on:

installed the flywheel (and later the pressure plate and bell housing):

sprung for this short throw shifter which I thought would make the transmission install go more smoothly:

And then towed the car over to his shop. For those of you that don't know, a t-56 does not fit into the tunnel of a manual transmission starquest. I was under the impression it did. I was very very wrong. Countless hours with a hammer proved fruitless, and I eventually faced the inevitable:

A big huge hole would be required to fit that bad boy in there.

for the crossmember we bought an energy suspension polyurithane transmission mount for the t-56, then welded a flat plate over the stock cross member and drilled it to bolt up to the energy suspension mount. Then we built a two surfaces to weld nuts to at the correct height so the factory cross member could be bolted up a-la oem.

This is why the car is having such slow progress. I don't know how to weld and my buddy understandibly had to charge me for welding in a tunnel and adding a cross member while I was in texas. I don't know how to weld, as much as I want to learn, and didn't have the time to simply do it on my own. My buddy did charge me an astoundingly low rate, however he didn't get much done while I was in texas and I ended up doing nearly everything that didn't involve the plasma cutter or the welder. Never the less 30-40 hours at the lowest fab rate on earth still puts a dent in your pocket. And thus the project is suffering a little right now. However I'm making progress where I can. Heres how the tunnel turned out:

This is the most recent picture, spoiler alert, I decided to tackle a major wiring project:

I'm really happy with how the tunnel turned out. We made it boxy for simplisty's sake, however I think it turned out really nice and goes with the dash quite well. We added an opening so I can unbolt the transmission easier for removal. Even though we made the tunnel larger, removing this huge box is hard work, especially when you don't have a lift. I towed the car, this time to my parents house, since I have moved out of the san luis obispo area and will be going to school at UCSD in the fall.

We used 16 gauge sheet metal for my tunnel, but also included a bracing bar that goes across the bottom from one side to the other. Its extremely sturdy, and the metal is coated with something that prevents it from rusting until I get around to painting it. This was the only sheet metal available to us on short notice in san luis obispo. Its a small town. The local mcarthy steel is open from 9am-3pm. Talk about an easy job.