First, lets acknowledge that there are lots of other posts and threads on how to upgrade to a 1G MAS.  If you are considering doing this modification, you'll want to read through the 1G Turbo MAS conversion thread located in Fuel/ECU System FAQ located here: http://www.starquest...topic=28110&hl=  If you read through that thread you'll see in Post #19 zactek mentions swapping the pins on the SQC harness with the pins on your 1G harness, but doesn't really get into specifics ... that's what this is going to cover.

To begin with, you are going to need a 1G MAS obviously, and 1G wiring connector.  The beauty about doing it this way is the connector doesn't have to be a turbocharged car b/c we're removing the pins anyway.  This opens up your junkyard searching to just about any early Mitsu vehicle that had a 8 pin MAS connector.

1G MAS (MUST be from a turbo-charged model) 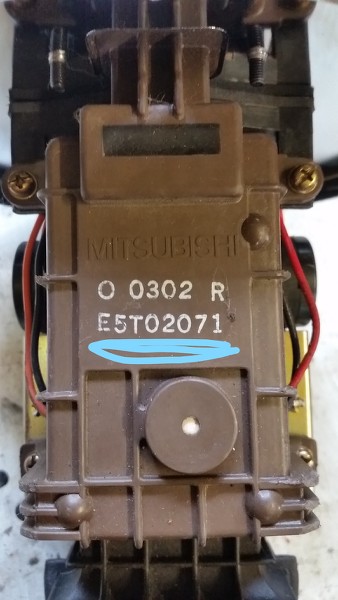 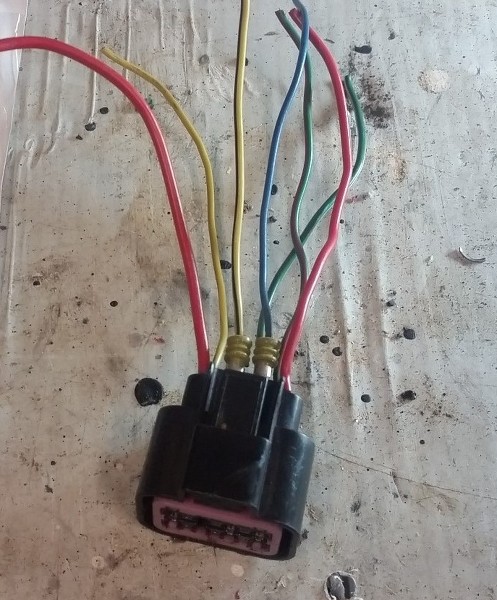 You're really only going to need one tool to do this - a dental pick.  It took me several hours and multiple evenings to figure out how to do this and what tool was best, so, hopefully this will save you all some time. 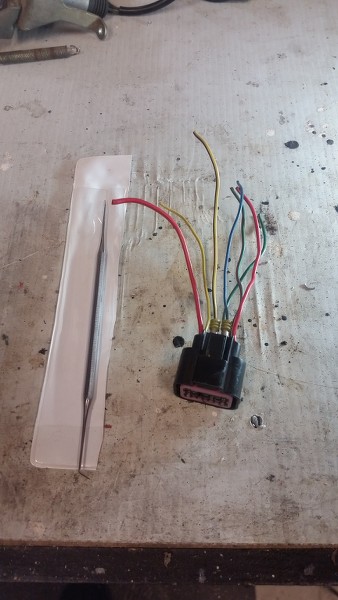 Here's where it's going to get hard to "show" you want to do.  You'll have to just try this out yourself and get the feel for it.  There is a slot in the middle of the connector.  Each metal connecting pin is held in place by a very small plastic clip, or finger.  You need to get the dental pick between the pin and clip, pry slightly up and pull the pin out by the wire at the same time.  It's not easiest thing to do, but once you figure it out and do a few you'll get a knack for it.  If you look down in the slot with a decent flashlight you might be able to see the little clip/finger thing I'm describing. 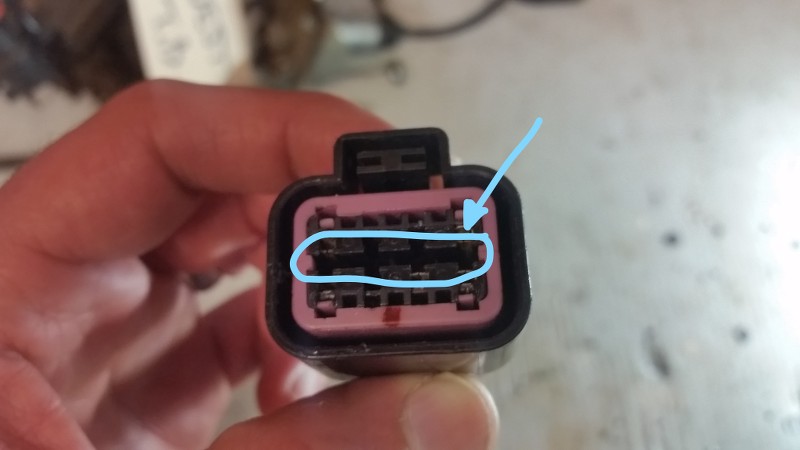 Because we're not interested in the wires in this case, you just remove them from the connector and discard them.  Continue one by one until all the wires/pin are removed you have just the connector in your hand. 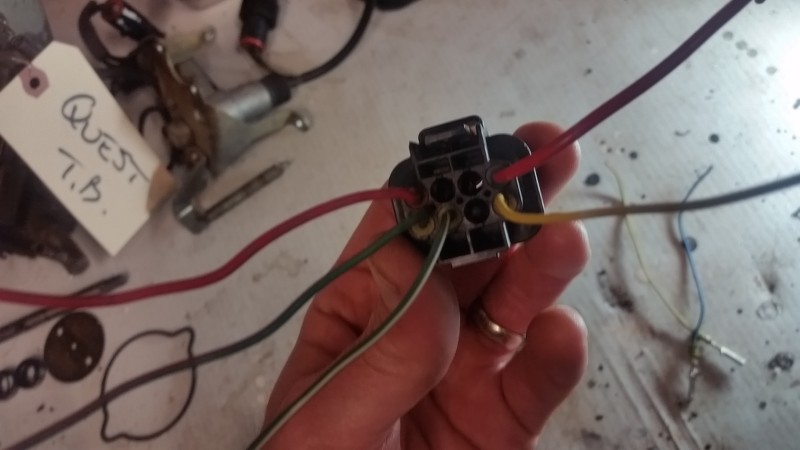 Now, on the SQC side of things, we do have pay attention to wiring.  For this, I'm going to use the same numbering system as the thread mentioned above to keep things consistent.  However, in that thread the numbers are provided looking at the back of the connector where the wires enter.  I never really look at connectors that way, I'm usually holding them in my hand looking at them from the front, so I made my own diagram to help keep things straight.  Below is the connector on your Starquest looking at it face-foward with the associated wire colors.  Below that is the 1G connector.  We're going to connect 1 to 1, 2 to 2, and so on.  Basically, the unused pin and 7 aren't used at all, so the right two slots will be empty. 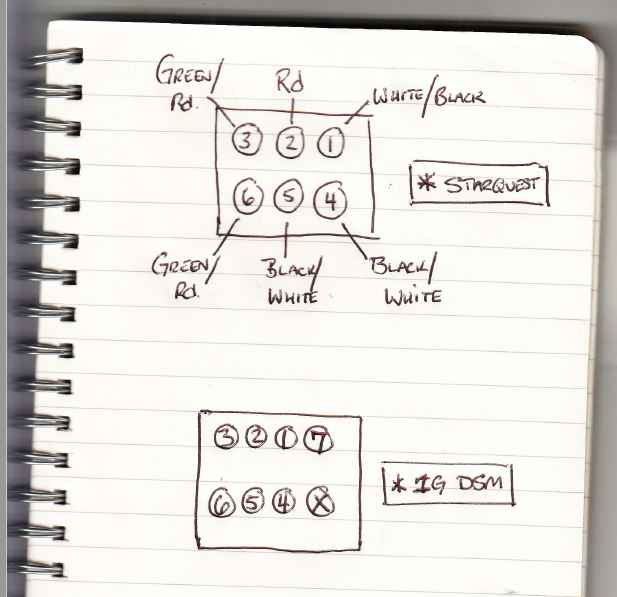 Now, it's time to repeat the process, except in the engine bay of your car.  Hopefully you've had good practice removing them from the loose connector on your workbench b/c working in the engine bay is a little more challenging. 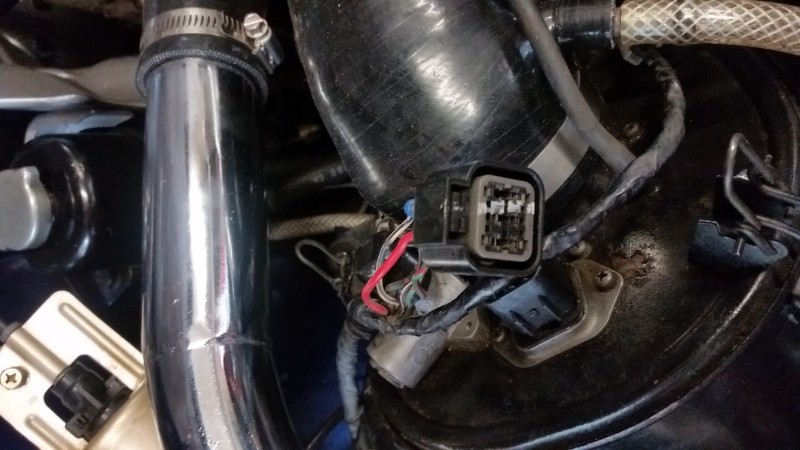 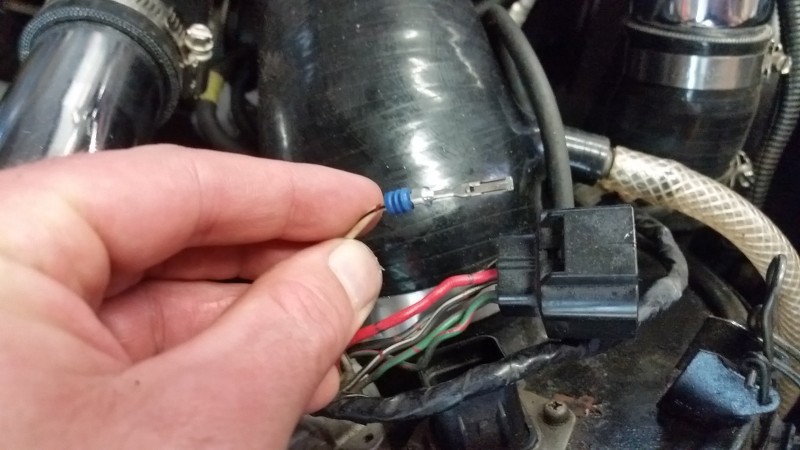 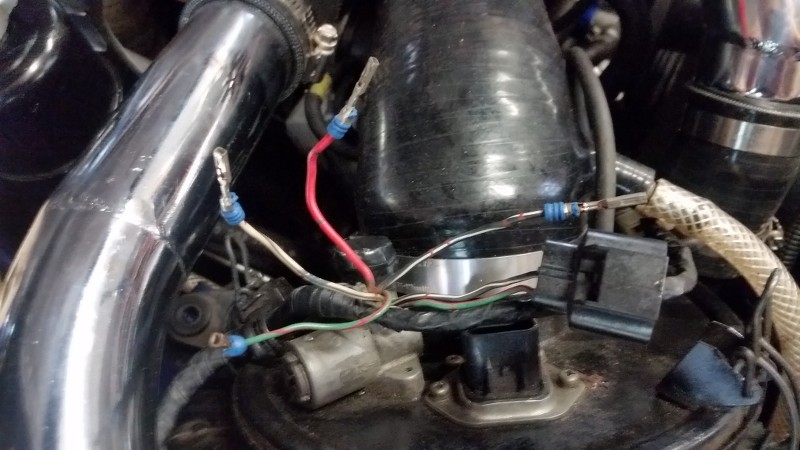 All of them removed: 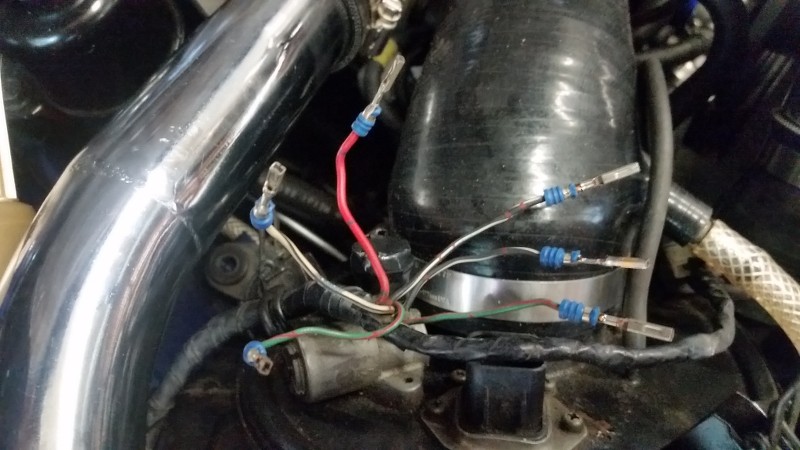 You may want to plug each one in right away as you remove them, I didn''t b/c I had my pinout sketch to look at to make sure I had everything right.  In the picture above I thought I had them all separated correctly in order, turns out I had the Red and White/black flipped on the left side there.  I caught it before I installed them.

To install them all you have to do is carefully slide them back into the 1G connector, you'll feel a little "click" and that's it, they're locked in place.  No hacking, soldering, shrink wrap or anything.  Just a dental pick and a steady hand.

Here are the wires re-installed into the 1G connector. 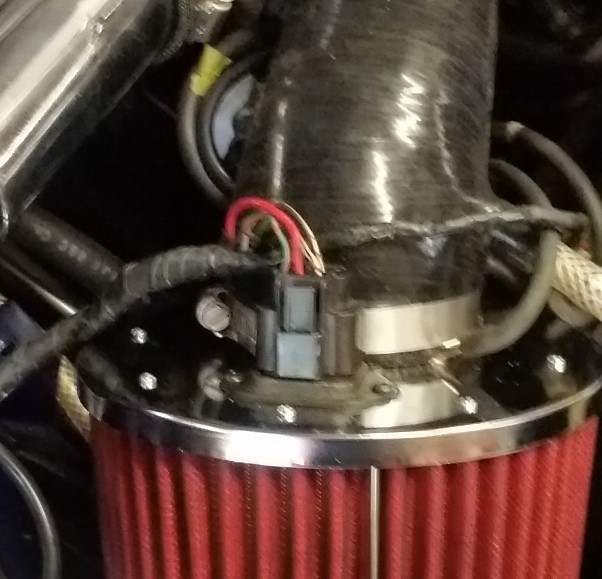 In Part two of this I'm going to show what I did for my actually intake install, this is just what I did though, there are several options out there, so don't take this to your grave.

So, like I said above, you're going to need a 1G MAS off of a turbocharged Eclipse, Talon or Laser.  You can find these a few places.  DSM boards that are still active have some in the F/S section from time to time, Ebay, and the occasional junkyard, although finding a 1G turbo in a junkyard these days is getting tough.

When you find one, it should look like this: 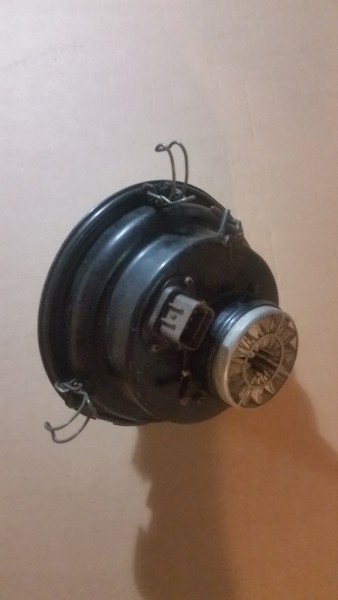 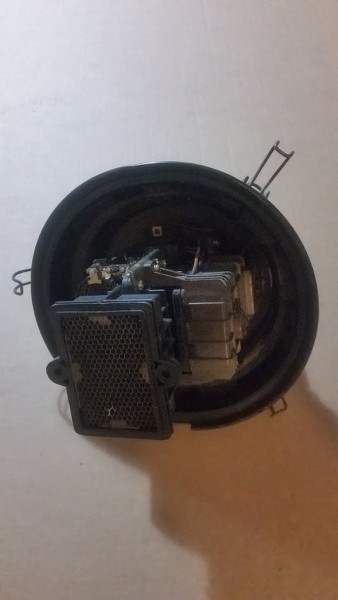 You can install them just like that, you'll just need to fab up some sort of mount support for it, which many on here have done.  K&N used to make an air filter that clipped right to the lid back in the day.  You just had to curl the metal clips a bit tighter to make it hold - I don't know if that's still available anymore, 1G's ruled a lot of years ago now.

The other option is you can by one of the COSMO units off eBay, which is what I did. This gives you a nice cone filter and polished lid.  It's a bit overpriced IMO, and it doesn't work very well with a stock MAS since you have to modify it by drilling new holes to make it work even though they advertise as such.  It's up to you.

First, it comes in a nice little snazzy box. 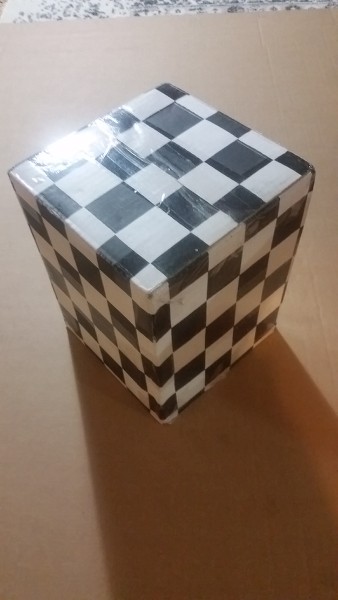 Here it is out of the box, comes with install instructions. 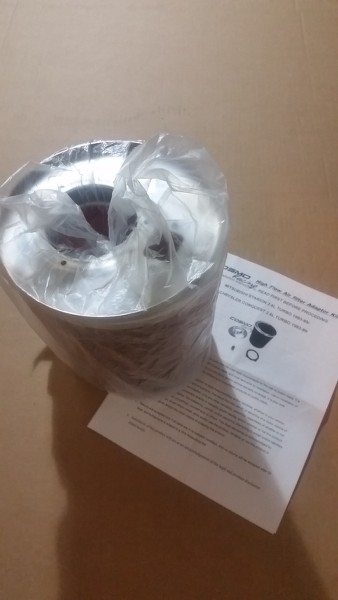 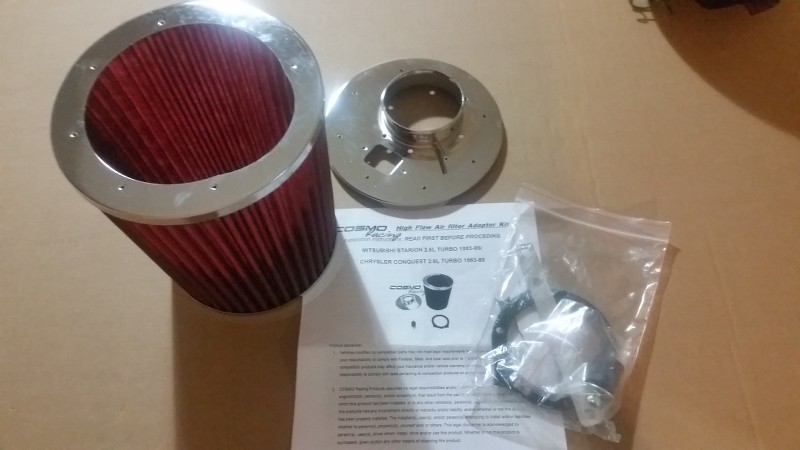 First thing you need to do is remove the MAS from the 1G lid.  It's pretty obvious, just remove all the screws on the top with a standard screwdriver. 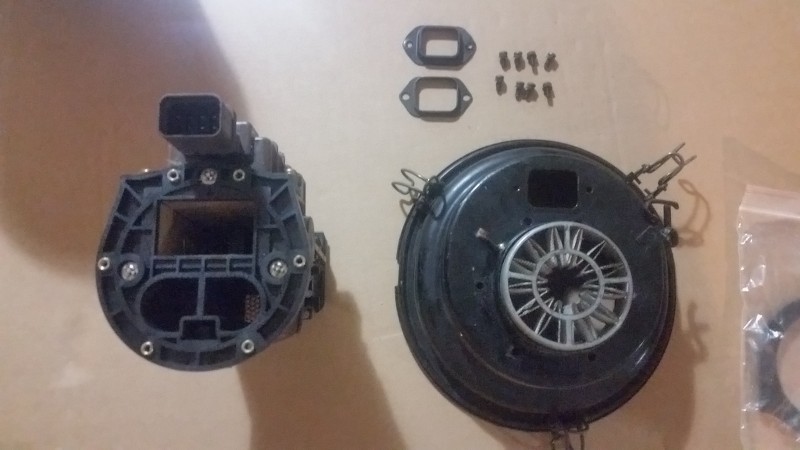 Once you have the 1G MAS separated you need to install it on the COSMO provided lid.  There's a gasket they give you that goes in-between. 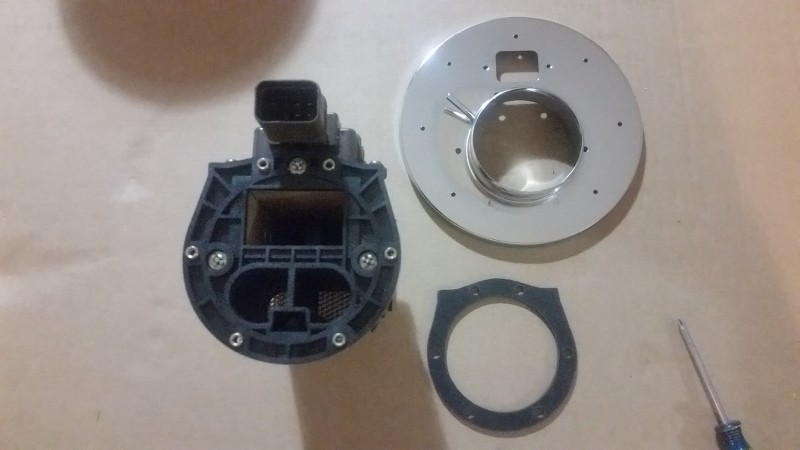 You're supposed to reuse the screws from your 1G MAS, they don't give you new ones.  I didn't want to do that and had these allen keys out in the garage from something.  I think they're M5's if I remember right, if not, I'll edit the post later. 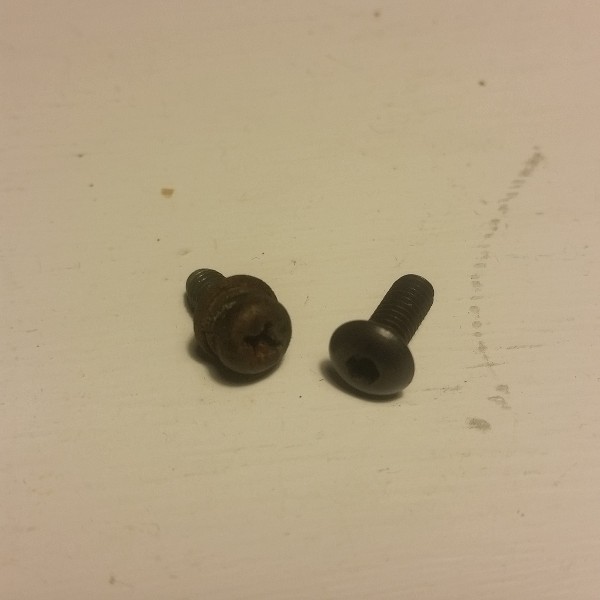 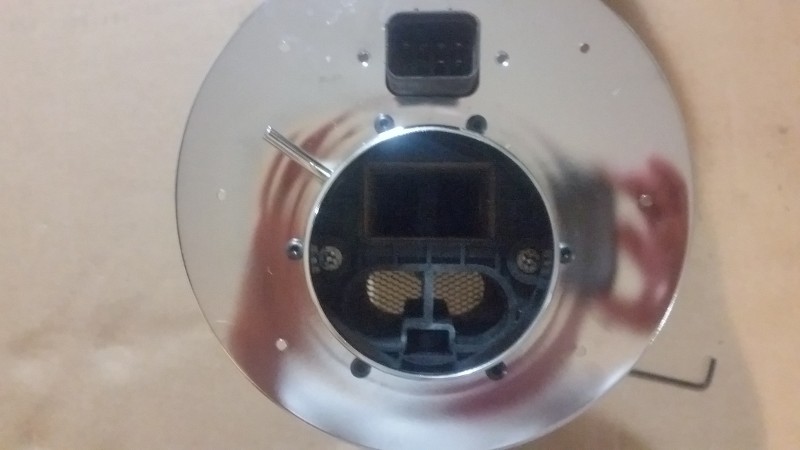 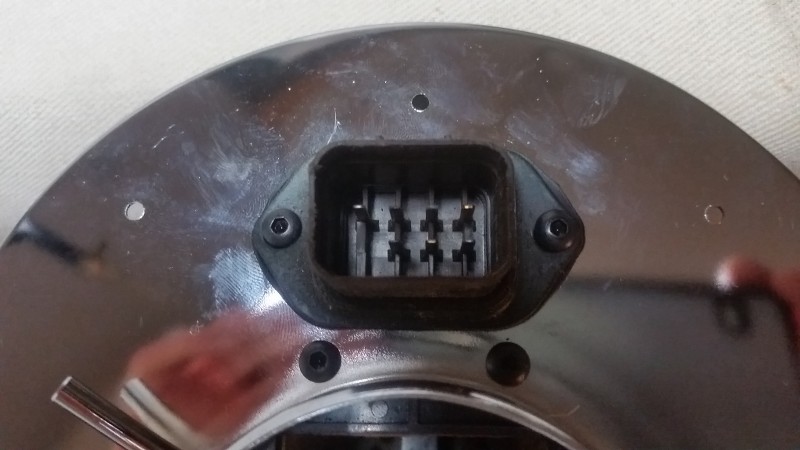 Now you attach the cone filter with the screws they do actually provide you. 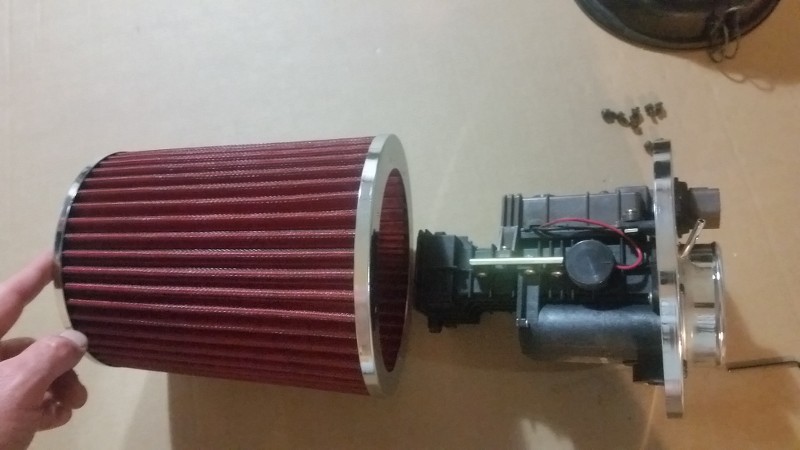 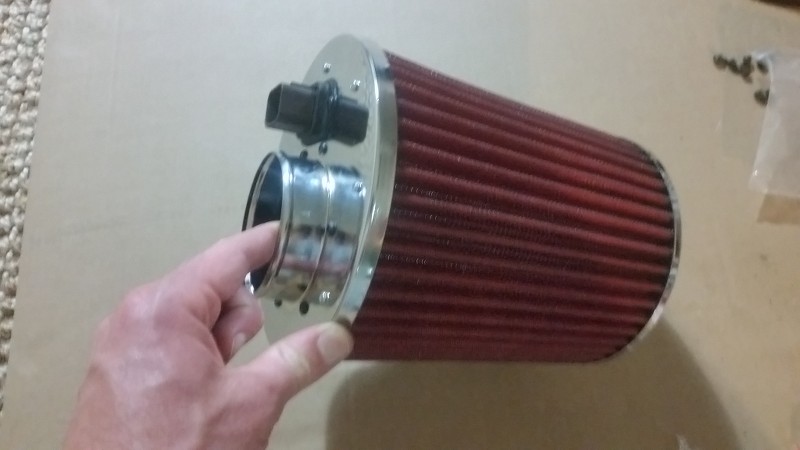 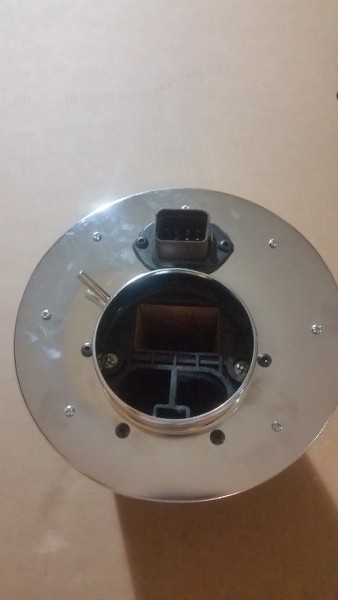 When you go to install this on your car, you'll notice the vacuum nipple they provide is kinda in a crappy spot.  The OEM port is on the face of the lid, this one is in the crevice of where the coupler attaches ...  which of course makes it hard to get to the coupler on well.  I trimmed a "V" shaped notch in my coupler. 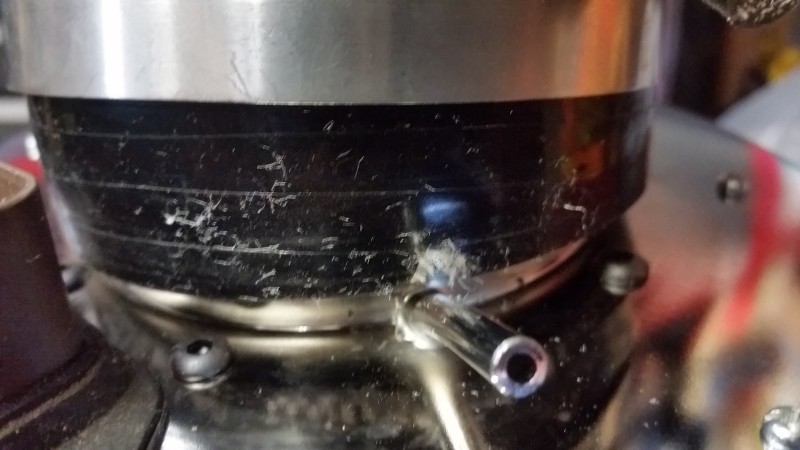 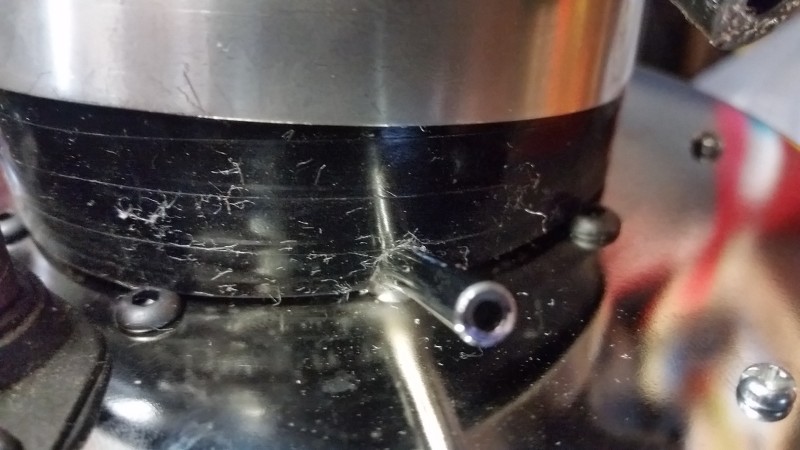 I also used the provided aluminum bracket to fashion a support for the assembly.  I had to modify it bit.  I cut it shorter and drilled my own holes, but it turned out like this: 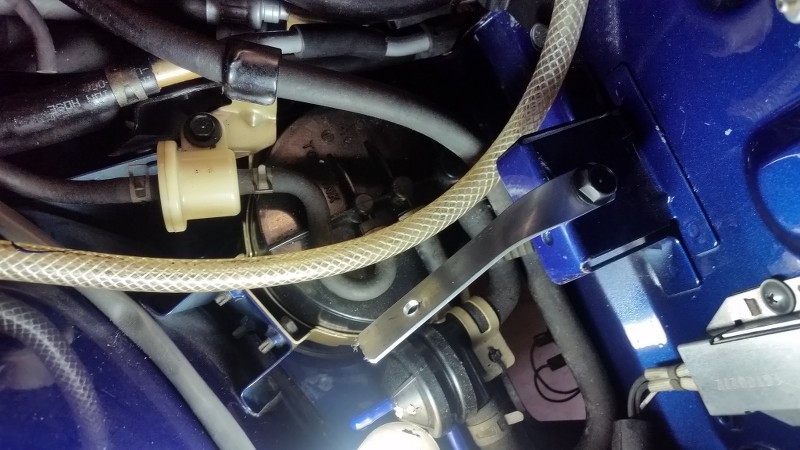 Here's the whole entire thing installed with the 1G connector I discussed above.  (BTW, that's a MK1 silicone intake coupler I bought awhile back install on there in case you're wondering). 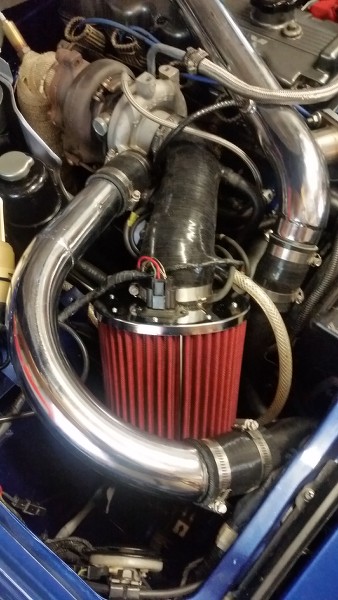 And, to close out, here's a side by side comparison of the SQC and 1G MAS side by side.  You can see the honeycomb area on the 1G MAS is a larger area, hence the upgrade. 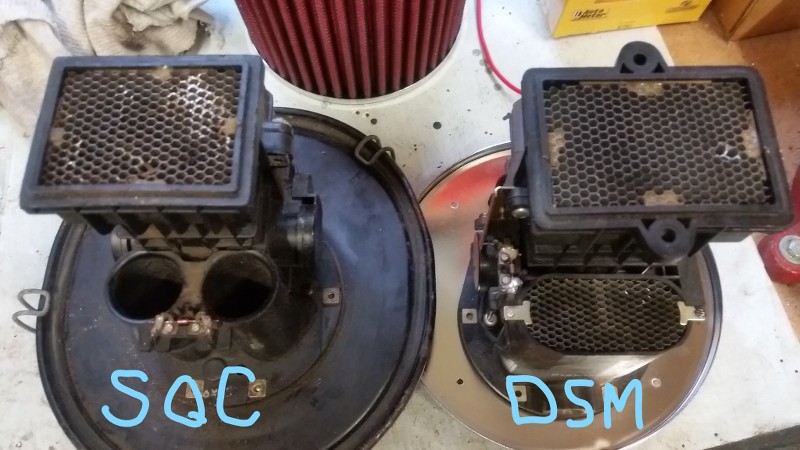 Great write up,also they sell the plugs here if you cant find one in the junkyard http://connectors.sh...om/NMWP8F-B.htm

Great write up,also they sell the plugs here if you cant find one in the junkyard http://connectors.sh...om/NMWP8F-B.htm

Also, here's a page I came across recently in one of my 4G63 engine building books.  It gives you the pinout as well as an explanation of what each pin/wire is. 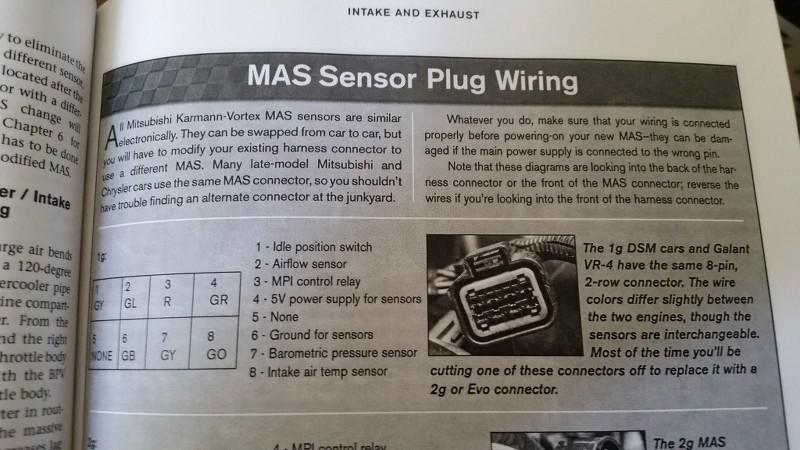 As above, great write up, thanks for taking the time to do it. How did your car run once installed?

As above, great write up, thanks for taking the time to do it. How did your car run once installed?

Ironic you should ask that.  I had to remove it right after I installed it.  The car would only run for like 3 seconds and die.  Pretty sure I have a bad 1G MAS, haven't made the effort to track down another one yet.  Lots of people have used 1G MAS as an upgrade though, so I'm not too worried about it not working once I get around to finding another.

Ironic you should ask that.  I had to remove it right after I installed it.  The car would only run for like 3 seconds and die.  Pretty sure I have a bad 1G MAS, haven't made the effort to track down another one yet.  Lots of people have used 1G MAS as an upgrade though, so I'm not too worried about it not working once I get around to finding another.

Ah bummer, that's unlucky. Yeah it's hit & miss with used parts ain't it, I've got a 1G MAS here which I imported from your side of the world & have yet to test it, so am hoping it's a good one as initially advertised. We'll see!

Were you planning to run a SAFC out of curiosity?

Took a while to locate one

Back to Engine, Exhaust/Intake, Turbo